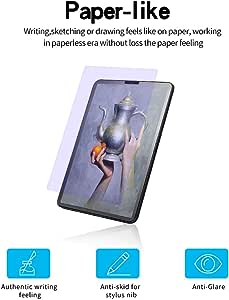 Made of matte material from Japan and using special frosted technology to guarantee this iPad 6-month normal wearand tear.

4.1 out of 5 stars
4.1 out of 5
23 global ratings
How are ratings calculated?
To calculate the overall star rating and percentage breakdown by star, we don’t use a simple average. Instead, our system considers things like how recent a review is and if the reviewer bought the item on Amazon. It also analyses reviews to verify trustworthiness.

Amazon Customer
1.0 out of 5 stars Fast deliver, but the experience with product is not great.
Reviewed in Australia on 16 April 2020
Verified Purchase
Hope this review is helpful for future buyers.

After installation:
The film does made the screen less smooth. Drawing on it is okay, but I wouldn't say it's good for drawing. Erasing using Surface Pen's tip is also becoming too hard. It also make fingers unusable on the screen. You can click using finger, but cannot really scroll smoothly.

Conclusion:
Not worth putting it on. Removing it soon.

Amazon Customer
4.0 out of 5 stars Great prduct, easy to instal
Reviewed in Australia on 17 October 2020
Verified Purchase
The items is good and packaged well. Only issue i encountered was that the labels on the screen were actually reversed. The step 1 was actually step 2/ Please be careful. Other screenguards from the same vendor did not have this problem.
Read more
Helpful
Comment Report abuse

wazza_jac
5.0 out of 5 stars This is awesome!
Reviewed in Australia on 21 May 2020
Verified Purchase
Such an improvement when using a pen of my surface pro, literally like writing on paper! No more slipping or drawing issues.
Read more
Helpful
Comment Report abuse

DinD
5.0 out of 5 stars Great product
Reviewed in Australia on 14 September 2019
Verified Purchase
Great product. Writes like a charm with no more slippery surface. Almost feel like paper. Hope the pen won't wear off due to rough surface. There is a tiny delay probably nano-sec in response though. I guess you have to accept it.
Read more
Helpful
Comment Report abuse

Sharon's Monsoonal Musings
5.0 out of 5 stars Fast delivery, great service
Reviewed in Australia on 31 August 2020
Verified Purchase
Easy to apply although I had some issues removing air pockets. Feels like paper great to write on with the stylus and relatively sensitive not too much lag.
Read more
Helpful
Comment Report abuse

Nantana
4.0 out of 5 stars Less responsive after installation
Reviewed in Australia on 21 July 2020
Verified Purchase
I am not sure if my Surface is less responsive to the Surface pen because of this, but it happens after I applied the screen protector.
Read more
Helpful
Comment Report abuse

John-Howard Avice-Demay
5.0 out of 5 stars Right for the job.
Reviewed in Australia on 2 November 2019
Verified Purchase
Does exactly what it is intended to do.
Read more
Helpful
Comment Report abuse

Sam F.
5.0 out of 5 stars Great.
Reviewed in the United Kingdom on 16 August 2020
Verified Purchase
I love these things, just be carefull when you're taking the top protective film off as the glue is a bit strong and it can pull the screen protector off the screen.
Read more
Report abuse

Hyeran Kim
1.0 out of 5 stars Bad
Reviewed in the United Kingdom on 2 December 2019
Verified Purchase
Poor value.
It stick awfully
And the touch is not working well.
I wasted my money
Read more

Admiral Teddy
4.0 out of 5 stars Good papery feel that comes with a downside.
Reviewed in the United Kingdom on 31 May 2019
Verified Purchase
I took a gamble and ordered one of these for my surface pro 6 as I use it to take notes and draw digital art and wanted a less slippery surface.
This had no reviews when I bought it and I just chose it since it seemed to match most of my wants.

You'll get an alcohol pad to clean the screen, a cleaning cloth, 2 screen protectors, a squeedgy, and a dust collection film (a sticky film that you can use to get rid of any small bits of dust on the screen).

It's very easy to install with clear instructions (just make sure you're somewhere to minimise dust or you'll get little bits stuck under. It pretty much clings onto your screen and you squeeze bubbles out. Though I will say, I have some experience with installing screen protectors, but you get two in the box so there is room for trial and error.

It gives you a superb paper-like feel and I haven't noticed any loss in pen or touch performance. Also reduces glare by a small amount, much better than glass glare though.

However, there are two downsides you need to consider. The first, which applies to all matt screens... Your screen will lose a bit of its vividness, so the colours won't shine as bright as it was with the glass, but they are still decent enough.
The second, and the reason I knocked off one star: there is a grain, which will become very visible on a white background. And since I draw on a white background, this is a big let down for me. Very simply put, you will see subpixels on a white background which to my understanding, is the result of some sort of anti-glare coating. It'll work fine for other colours of the spectrum, but as you reach white, it will be visible. (though it depends on your distance from the screen, but this is a tablet/laptop so you will be close more often than not.
Update: after some time with this, I have grown used to it and it isn't as noticible to me, but you can tell there is some coating there, though I think the paper like feeling and the touch accuracy justifies it for me.
Read more
4 people found this helpful
Report abuse

Andy Ford
4.0 out of 5 stars Good for handwriting
Reviewed in the United Kingdom on 1 March 2020
Verified Purchase
A nicer texture to write on than the original surface screen. It slows the stylus down a bit!
Read more
Report abuse
See all reviews
Pages with related products. See and discover other items: Best Rated in Tablet Screen Protectors
Get FREE delivery with Amazon Prime
Prime members enjoy FREE Delivery and exclusive access to movies, TV shows, music, Kindle e-books, Twitch Prime, and more.
> Get Started
Back to top
Get to Know Us
Make Money with Us
Let Us Help You
And don't forget:
© 1996-2020, Amazon.com, Inc. or its affiliates