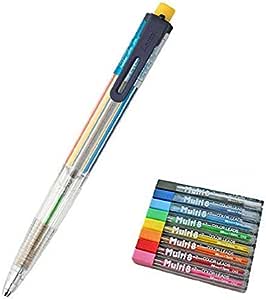 Visit the Pentel Store
5.0 out of 5 stars 2 ratings

Auto Crayon offers eight lead colors in one automatic pencil. The equivalent to a box of pencils comes in one handy, refillable pencil. Ideal for highlighting thin grades of papers, such as bibles, encyclopedias, dictionaries and more. Great for drawing, sketching, and crafting. Refillable with Pentel CH2 leads.

Gail No 3
5.0 out of 5 stars Pentel PH158 Pen
Reviewed in Australia on 20 July 2020
Size Name: 1 PencilVerified Purchase
I love this Pentel marker pen as I use it for Bible marking and it does not bleed on the page nor go through it. It is absolutely perfect for what I need it for - Thank you!
Read more
Helpful
Report abuse

Amazon Customer
5.0 out of 5 stars Very practical and useful!
Reviewed in Australia on 7 April 2021
Size Name: 1 PencilVerified Purchase
I like the pencil because there is 8 colours together and I use it to highlight verses in my Bible
Read more
Helpful
Report abuse
See all reviews

ladilynn63
5.0 out of 5 stars Great multi-color tool...where has it been all my life?
Reviewed in the United States on 5 December 2015
Size Name: 1 PencilVerified Purchase
I love this multi-color pencil. I bought two and have all the colors of leads except for the neon ones. I use mine exclusively for coloring books right now. I love that I can have 12 colors between two pencils and not have to dig through a box or pencil case for the right color. They are basic colors, nothing fancy - I probably only used half the colors in a set of 25 colored pencils anyway. I have not tried to blend colors yet but I'm pretty sure it could be done with this lead. The best part of the pencil is being able to easily see all the colors that are loaded in it. I'll be using it for coloring sketches soon, I just haven't gotten around to it. For me, it's too thick for taking notes or any sort of writing since I like a very fine lead for that. As to function, this is easy to use once you get the concept of NOT turning the clip to another color until the last color has been fully retracted. It's easy, invert the pencil, press the button on top of the pen - lead slides back into the top of the pencil. Be careful turning the clip to change colors at first, it will be a bit stiff. Do not force it. Just go in the opposite direction - it will "loosen up" with each use. Changing the colors or putting in a new lead is also simple. Align the "REFILL" letters on the top button to the clip. Hold the pen point facing down. When you press the button, whatever color you are on will come all the way out (it happens quickly so make sure you are ready to catch it). Slide the new lead in - metal end first. The leads are a bit pricey but they last a long time for me (I get mine at www.jetpens.com for $1.65 per color). I haven't had any issue with the lead breaking on me while I'm coloring - I always make sure not too much is sticking out. I have broken it by dropping the lead though. It is 2mm thick but like any lead will break if you aren't careful. One final note: Amazon has the best price for the Pentel Multi-pencil.
Read more
28 people found this helpful
Report abuse

I did not know how either model worked this one and this one (  Pentel Multi 8 Lead Holder - 2 mm ), and bought this because I noticed the other model had metal on the end of each lead, and thought that if I didn't buy led with the medal it wouldn't work, it turns out this model also has the metal on the end as well, but it seems like the pencil will still function just fine if you bought any type, as long as it is the right length and 2.0mm. Here's why: with this model of pen, the very tip of the pen grabs the led and holds it in place, so as the user, when you hold down the button to bring the led down you have to physically stop it where you want, or else it will fall out completely, the metal part does not stop the lead from falling out. Also, if you ended up breaking your lead, I feel that it would still work because as mentioned, the tip of the pen grabs the lead.

One star less because I feel the metal parts on each lead is pointless and just wastes a portion of the already small lead; therefore, I won't be buying the expensive Pentel refills. Also because I do not find it to be useful and efficient as I originally thought it would be.
Read more
13 people found this helpful
Report abuse

Tracie
5.0 out of 5 stars Great Purchase! Be sure to read my one warning!
Reviewed in the United States on 29 May 2014
Size Name: 1 PencilVerified Purchase
Love this pencil! It's very convenient having 8 colors in one instrument. I'm using mine for reading and studying the Bible, and it's great! I love how easy it is to make a color change. This was the best price I found anywhere. The seller shipped fast, and I received it quicker than expected. One word of warning, extend as little lead as possible to write (just a little less than the directions). I broke my lead and thinking I wouldn't waste that piece, I stuck it back in the pencil. I was able to write with it and was pleased by my frugal idea, but it didn't take long and that small piece got stuck in the barrel. The pencil still works fine , but it drives me crazy to see pink led stuck in my pretty clear barrel! I've tried everything and it's not coming out! So, If the lead breaks, mourn your tiny piece of color loss and bury him. I wouldn't recommend trying to save him!
Read more
53 people found this helpful
Report abuse

Kate
5.0 out of 5 stars just what a scripture marker needs
Reviewed in the United States on 14 October 2019
Size Name: 1 Pencil + RefillsVerified Purchase
I like to highlight scriptures but the thin paper makes using a pen, pencil or even a yellow pencil tricky. Either it bleeds thru or wrinkles the paper. These wonderful pencil tips work terrific for marking in books, scriptures, or even highlighting my grocery list. I love the thick pen, how fun to easily change colors and reloading is a breeze. I had one of these from about 20years ago or longer and couldn't find refills. Thank you! Now I have two pencils and plenty of refills! Stand back, I"m about to mark something!
Read more
3 people found this helpful
Report abuse

D. Leander
5.0 out of 5 stars Great color and consistency!
Reviewed in the United States on 23 April 2016
Size Name: 1 PencilVerified Purchase
This is a unique product that is terrific for on the go coloring, bullet journaling, or Bible journaling. The pen is not quite like the old-school pens where you just quickly click down to get a lead; you need to "select" the lead and then open the chute. When it's time for another color, you need to have the lead go up the chute and select a new lead etc. I find the colors to be accurate and the leads soft enough to produce some great color. Would buy again. Buy the lead refills too as the pencil only has one thread of lead per color.
Read more
11 people found this helpful
Report abuse
See all reviews
Back to top
Get to Know Us
Make Money with Us
Let Us Help You
And don't forget:
© 1996-2021, Amazon.com, Inc. or its affiliates