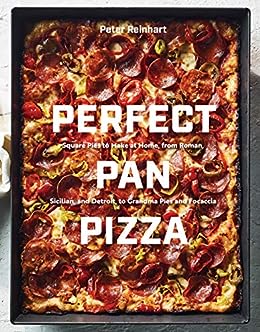 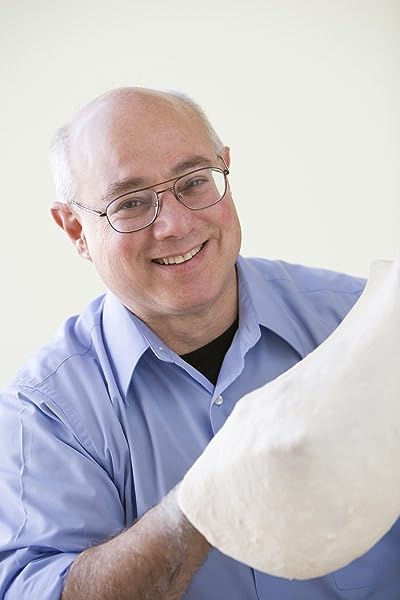 Perfect Pan Pizza: Square Pies to Make at Home, from Roman, Sicilian, and Detroit, to Grandma Pies and Focaccia [A Cookbook] Kindle Edition

Enjoy a great reading experience when you buy the Kindle edition of this book. Learn more about Great on Kindle, available in select categories.
An in-depth guide to pan pizza from baking authority Peter Reinhart, including achievable recipes for making Detroit-, Sicilian-, and Roman-style pan pizzas and focaccias in a home oven.

This new book from bread legend Peter Reinhart is a lushly photographed ode to the pan pizza, a doughy, crispy, crowd-pleasing version of everyone's favorite food that is easy to make in a home oven without specialty equipment like stones and peels. Starting with recipes for three master doughs that can be made with commercial yeast, as well as a brief intro to sourdough starters, Perfect Pan Pizza illustrates how to make several styles of pan pizza including Detroit-style "deep pan" pizza, focaccia and schiacciata, and Roman and Sicilian styles through step-by-step photographs. The pizzas include classic toppings like pepperoni and mushrooms, as well as an exciting variety of recipes like the sandwich-inspired Philly-style Roast Pork and Broccoli Rabe; Reuben pizza; Bacon and Egg with Tomato and Arugula Pizza; Blue Cheese, Balsamic Onion Marmalade, and Walnut Focaccia; and Rosemary Garlic Potato, Baby Kale, and Prosciutto Pizza Al Taglio. With unique recipes, plenty of informative FAQs for beginners, and a permissive and inspiring tone, this book will appeal to both experienced bread bakers and novice home pizza makers alike.
Read more
Previous page
Next page
Due to its large file size, this book may take longer to download

"This celebration of one of pizza's underappreciated permutations is the latest must-read by bread-making legend Peter Reinhart."--Fine Cooking "[Reinhart's] techniques are methodical and easy to follow. . . . This is a great guide for home cooks who want to create pizzas that have more bite and chew to them than thin crust pizzas."--Publishers Weekly "Make pizza like your Italian nonna did--in a pan. And oh, wow! It's great! This guide from Peter Reinhart is pragmatic, accessible, and creative, and you will soon find it indispensable."--Ken Forkish, author of The Elements of Pizza and owner of Ken's Artisan Pizza and Checkerboard Pizza

"Written by a true expert and pizzaiolo, this masterpiece delves deep inside everyone's favorite food."--Tony Gemignani, author of The Pizza Bible and owner of Tony's Pizza Napoletana "Peter Reinhart's tireless quest for pizza perfection brings the reader new insights into the art, craft, and science of pan pizza in all its forms."--John Arena, owner of Metro Pizza

"Reinhart has an uncanny ability to create books that speak to people, and Perfect Pan Pizza is no exception. Once again, he has delivered a book that is both inspirational and educational to baking and cooking enthusiasts of all levels."--Brian Spangler, owner of Apizza Scholls
--This text refers to the hardcover edition.

An in-depth guide to pan pizza from baking authority Peter Reinhart, including achievable recipes for making Detroit-, Sicilian-, and Roman-style pan pizzas and focaccias in a home oven. --This text refers to the hardcover edition.

PETER REINHART is widely acknowledged as one of the world's leading authorities on bread. He is the author of ten books on bread, including the James Beard Award- and IACP cookbook award-winning The Bread Baker's Apprentice, and American Pie- My Search for the Perfect Pizza. He appears regularly on television and radio, and he is a full-time baking instructor at Johnson and Wales University, a culinary and keynote presenter at conferences around the world, and the founder and host of the popular video website PizzaQuest.com. --This text refers to the hardcover edition.
Read more

PETER REINHART is widely acknowledged as one of the world's leading authorities on bread. He is the author of six books on bread baking, including the 2008 James Beard Award-winning WHOLE GRAIN BREADS; the 2002 James Beard and IACP Cookbook of the Year, THE BREAD BAKER'S APPRENTICE; and the 1999 James Beard Award-winning CRUST AND CRUMB. He is a full-time baking instructor at Johnson and Wales University and the owner of Pie Town restaurant in Charlotte, North Carolina.

4.7 out of 5 stars
4.7 out of 5
553 global ratings
How are ratings calculated?
To calculate the overall star rating and percentage breakdown by star, we don’t use a simple average. Instead, our system considers things like how recent a review is and if the reviewer bought the item on Amazon. It also analyses reviews to verify trustworthiness.

Dave Brown
3.0 out of 5 stars Think twice on this purchase, there are better books out there
Reviewed in Australia on 9 January 2021
Verified Purchase
I have a number of books from Peter Reinhart and I am a big fan of his work. This book however is a rehash of his other recipes and methods. I didn't see anything new or innovative in Reinharts dough methods compared with his other books, quite basic I thought. Peter now brings along other 'pies' as he calls them such as the Detroit style Focaccia and Roman Pizza's using one of three master doughs used throughout the book. One of the doughs is sourdough using a 'mother'/ starter and then there is his typical wholewheat option yawn (who eats wholewheat pizza) and then one using bread bakers flour which is a cop out when if your making authentic pizza it has to be italian 00. Forget king arthur he hasn't a clue when it comes to a European quality flour. When I read the recipe for the bread bakers flour for a Roman style it uses olive oil as an ingredient, what is he thinking? From an aficionado olive oil is a not used, it should be flour water, salt and yeast only. The book has good reviews on the inside cover from several pizzeria owners and big names such as Gemignani and Forkish and a guy that offers pizza tours, really? I think that there is some back slapping going on here because these two guys leave Peter for dead in my opinion. Both Gemignani and Forkish have pizzerias Peter does not have a pizza store. I'm not so sure how a person can be an authority on a subject such as pizza making when you don't do it for a living and I don't think working for a university quite cuts it. Paying customers buying your goods is the only way to know that a person knows what they are doing well. 'If you don't own the Ken Forkish Elements of Pizza then you need to go with that one or the Gemignani Pizza Bible which is another great option. I don't like the way Gemignani asks you to jump to this page carry out several steps then to that page to make up some of his pizzas it is not fluid reading and makes what should be a straightforward set of instructions into a mission quite tedious. Another point about this book is that it has lots of thick padding for the front and back covers making it appear to have more content. Note that it is around 1/3 smaller in contents on the page compared to his other books. Overall for a beginner who is just dipping their toes into this subject its an okay book. I got the feeling when I read through the book that I had been ripped off and he had cashed in on his name and the subject at hand.
Read more
2 people found this helpful
Helpful
Report abuse
See all reviews

FunkMaster
5.0 out of 5 stars Nice selection of recipes
Reviewed in the United Kingdom on 9 December 2020
Verified Purchase
I was looking for a recipe book that would give me lots of options for pan pizzas since my clay oven is hibernating for the Winter and this has many.
Read more
Report abuse

Kerry
5.0 out of 5 stars Christmas present
Reviewed in the United Kingdom on 13 February 2020
Verified Purchase
Bought as a christmas present. My other half loves it and we have already made some of the pizzas!
Read more
Report abuse

Truly Sirius
5.0 out of 5 stars As promised! A good pizza from my own oven!
Reviewed in Canada on 14 July 2019
Verified Purchase
OK, so if you like the deeper dish styles in this book, then just don't worry about baking steels etc.
What Mr. Reinhard says is true.
You really can create an excellent pizza in your own home. I did it this evening.
I follwed his recipe for the white flour dough, and brought it home to create the Classic Detroit Red Stripe pizza.
We made the suggested marinara suace to finish it and , oh my, it was divine.
I can see that I will have to crank my convection bake setting to 475 as opposed to 460, in order to get that classic browning.
This book is indepensible for a pizza cook like myself, who does not want to invest in a ton of fancy equipmnent.; rather, I feel that my convection overn should stand as an investment in itself. This book shows that it can!
I love this pizza cookbook, and perhaps you will too.

Jillian Relano
2.0 out of 5 stars Beautiful book, but whole wheat dough recipe is off
Reviewed in Canada on 14 November 2019
Verified Purchase
This is a beautiful book with a lot of great information, however I don't know if I got an older version of the book or if there have been revisions, but the recipe for the whole grain country style dough has incorrect measurements in grams. I'm assuming that the recipes based on percentages are correct but the gram measurements don't match them. Using the gram measurements makes for an unworkable, over hydrated dough.

Just to make sure I was reading the recipe correctly, I emailed the author, Peter Reinhart and he confirmed that the gram measurements were off and he was going to contact the publisher to get it corrected.

I haven't verified the white dough recipe but it looks like others that have reviewed the book were successful so I'm going to assume it's correct.

I would either wait for an updated version to come out before buying this book or go strictly by the percentages in the dough recipes
Read more
2 people found this helpful
Report abuse
See all reviews
Back to top
Get to Know Us
Make Money with Us
Let Us Help You
And don't forget:
© 1996-2022, Amazon.com, Inc. or its affiliates