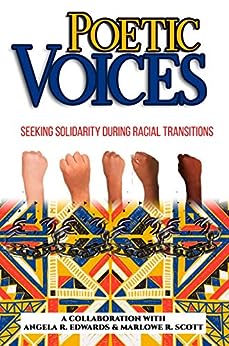 The landscape of the world is changing yet again. Where it once appeared various races were coming together, forces have come with a distinct mission to disturb that peace.

Will they be successful? Not if these authors have anything to say about it!

From the minds of children as young as seven, to the musings of an older generation, Poetic Voices speaks of times past and present, while looking toward a hope-filled future.

Readers are encouraged to search within themselves to determine how they truly feel…to express those things they are either afraid to give a voice to or have been “whipped” into silence about.

With the onset of Black and Brown people holding high offices in the United States Government and more, NOW is the time to stand in unity and embrace the culture that is not meant to cower but to come together and profess: WE WILL NO LONGER BE SILENT!

GRAND NANA
5.0 out of 5 stars Poems to Enable Positive Change in America's Racial Issues
Reviewed in the United States on 17 September 2020
Verified Purchase
The messages in this book expressed in Poetic form are priceless and should be made a part of these historic times!!! From 7 to 76 years of age the voices are written out for all to read and understand!!! Pearly Gates Publishing, LLC has again produced a collaboration to bless, encourage, inspire and enable changes for ALL MANKIND!
Read more
Report abuse

Brenda T
5.0 out of 5 stars A true Treasure
Reviewed in the United States on 18 September 2020
Verified Purchase
I cannot say enough about this book. I purchased it yesterday and could not put it down until I finished. Today, I still think about the poems and stories. I especially felt moved by the words written by the youth. Their experiences remain with me. I recommend this book for readers of all ages. It is a treasure. Sincere thanks to the authors, publishing company and contributors for this special book.
Read more
Report abuse

Terrace
5.0 out of 5 stars One Voice
Reviewed in the United States on 27 September 2020
Verified Purchase
This book is a must read for all ages! The contributing authors let it all out and expressed their raw feelings about the events of racial transitions. Together, they speak with one voice of unity and necessary change!
Read more
Report abuse
See all reviews
Report an issue
Does this item contain inappropriate content?
Report
Do you believe that this item violates a copyright?
Report
Does this item contain quality or formatting issues?
Report