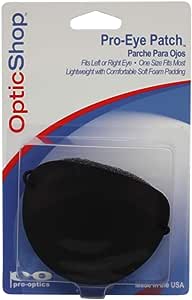 Brand: Pro-Optics
3.9 out of 5 stars 143 ratings
Secure transaction
Returns Policy
Amazon-managed Delivery
Your transaction is secure
We work hard to protect your security and privacy. Our payment security system encrypts your information during transmission. We don’t share your credit card details with third-party sellers, and we don’t sell your information to others. Learn more
Amazon-managed Delivery
Amazon manages delivery by using preferred couriers/agents. Order delivery tracking to your doorstep is available

3.9 out of 5 stars
3.9 out of 5
143 global ratings
How are ratings calculated?
To calculate the overall star rating and percentage breakdown by star, we don’t use a simple average. Instead, our system considers things like how recent a review is and if the reviewer bought the item on Amazon. It also analyses reviews to verify trustworthiness.

Amazon Customer
5.0 out of 5 stars Best patch ever...I'll teach you how to adjust it
Reviewed in the United States on 30 April 2015
Verified Purchase
I love this patch! I've needed to wear an eye patch a lot since losing my eye in 2002. Other eye patches (Walgreens, Wal-Mart, and local pharmacy) I've used are way too tight when you first open up the package. I also don't like that they have a point, or that they look like a cone covering my eye. My most recent patch before this one also came from the internet. This one was great because it was adjustable (you string the elastic through the holes and tie little knots in front, but I don't like being able to see the little knots) and it is made out of a rubberized type material, maybe silicone? This was nice because there was no longer a cone or point poking out. This is nice, too, because you could wear it underneath glasses. The downside with that patch is that it got hot and steamy under there. Who knew your eye could sweat, right?! This patch it awesome because it using the same concept of being adjustable, but the knots are underneath the patch and behind some foam that's underneath. The foam keeps the knots from rubbing against your head. This is the most comfortable patch there is, I'm convinced. It is nice and smooth so there is no point. I haven't tried, but I'm pretty sure it would fit under glasses. It also doesn't get hot underneath because the foam keeps it from laying flat against your face. At certain angles, you can see the grey foam underneath, which I don't really like, but this patch is so much better than any other that I've used that I'm willing to overlook this one flaw. Buy this one, you won't regret it! After trying this one and discovering its greatness, I turned around and bought 2 more.
*** The eye patch is adjustable, but it doesn't appear that way at first. When looking at the eye patch, foam-side up, the knot on the upper right side is the adjustable one. It's actually glued in place under the foam. I just opened a new patch and I'd forgotten this was my experience the first time I opened a package. You have to kind of work the knot away from the glue a little. It may seem like you'll ruin the patch, but you won't. Just move the foam a little away from the knot and pull on the knot. It will give away after a few tugs. Once it does, you adjust it to the size you like by making a new knot and cutting the excess off. The new knot will rest under the foam and you won't feel anything.
It's a bit frustrating that there were no instructions with the patch, but now that I know the tricks, I love this patch! Give it a try, it was a game changer for me!

PoochMania
1.0 out of 5 stars Poorly made, sponge inside is good idea, but didn't provide the comfort, rather it added more problem.
Reviewed in the United States on 28 February 2016
Verified Purchase
I got this for my husband who has brain tumor that was pressing his optic nerve and restricting movement on his left eye. Because of this problem, he has double vision. While he was waiting for the surgery, he had to have eye patch, so that he doesn't see double.

* Elastic broke - Well, laterally first time he put this on, elastic broke, so I had to sew them back on. If I bought it from the local store, I would have run to the store and exchange, but I got it from Amazon and I couldn't wait for exchange. (no time for that)

* It's too thick. - When he was wearing this, there is no way to wear his glasses. Around inside edge of the patch has rather thick sponge that pushes the patch too far out, even if he can get his glasses over this patch, he can't see too well.

* Doesn't cover the eye well. - When he wear this patch, it doesn't sit well on his face and doesn't cover his eye well. He said light coming through gap between the patch and his skin, it actually irritate his eye more and his eye to tear.

I ended up buying one from the Walgreen (the kind that is flat-no cushion inside of patch kind), so he could use it while waiting for the surgery.
I should have return this immediately after I received. However, under the circumstances, I didn't have a mind set to call Amazon and package this up for return or refund. So, this was totally waste of money, time and create more aggravation.

Terry R. Nye
3.0 out of 5 stars non-adjustable band; does not fit under glasses
Reviewed in the United States on 5 July 2017
Verified Purchase
I purchased this eye patch to wear while recovering from cataract surgery. The patch arrives nicely packaged. The patch itself is plastic and has a foam edge on the inside that makes contact with your skin for a seal that does not let light in. The band is a thin, flexible cord that cannot be adjusted for size.

After having cataract surgery on my first eye I tried to wear the patch but quickly discovered it does not fit under my glasses. So, for me, it was useless. It could be worn for eye protection while sleeping at night, but its size is pretty small compared with the eye shield provided to me by the surgery center, and I do not think it would offer as good protection for that reason.

If you do not need glasses and simply need to patch one eye, you may find this eye patch to be worthwhile. The band fits snugly, but since it is not adjustable I expect it will loosen over time with usage. Anyone requiring a patch to wear on a permanent basis will probably want to consider another product. For me, even for temporary usage, because I could not wear it with glasses it was a waste of money.
Read more
One person found this helpful
Report abuse

tony
4.0 out of 5 stars Good eye patch
Reviewed in the United States on 30 March 2017
Verified Purchase
This is a good eye patch. So far I haven't had any issues with it. Since first using eye patches, I had been looking for one that I could use at the gym, and this one seems to be holding up pretty well. I have no sight out of this eye and it is discolored plus smaller than my other eye. So that is the reason I use eye patches, I don't really have to worry about light coming through since I have no sight through this eye.
Read more
3 people found this helpful
Report abuse

GSLOGOS
1.0 out of 5 stars The Three Day Eye Patch.
Reviewed in the United States on 3 January 2015
Verified Purchase
Eye patch is light-weight & more attractive than most but has a fatal flaw : once the tension in the elastic string is gone - that's it !!! The eye patch becomes utterly useless. The more you use the eye patch the quicker the tension in the elastic string decreases. After I started using/wearing mine, all the elasticity was gone in three days or so.
Read more
35 people found this helpful
Report abuse
See all reviews
Get FREE delivery with Amazon Prime
Prime members enjoy FREE Delivery and exclusive access to movies, TV shows, music, Kindle e-books, Twitch Prime, and more.
> Get Started
Back to top
Get to Know Us
Make Money with Us
Let Us Help You
And don't forget:
© 1996-2020, Amazon.com, Inc. or its affiliates