A Promised Land and over 1.5 million other books are available for Amazon Kindle . Learn more
Share <Embed> 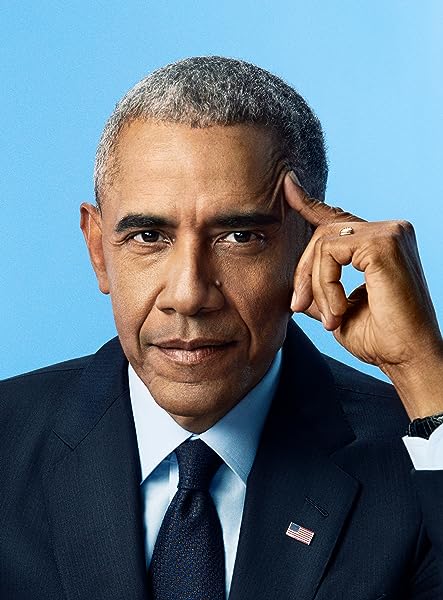 Releases January 5, 2021. Pre-order Bluey, The Pool now with Pre-order Price Guarantee.
If the Amazon.com.au price decreases between your order time and the end of the day of the release date, you'll receive the lowest price. Order now
click to open popover

Page 1 of 1 Start overPage 1 of 1
This shopping feature will continue to load items when the Enter key is pressed. In order to navigate out of this carousel please use your heading shortcut key to navigate to the next or previous heading.
Back
Next
Start reading A Promised Land on your Kindle in under a minute.

Barack Obama is as fine a writer as they come. It is not merely that this book avoids being ponderous, as might be expected, even forgiven, of a hefty memoir, but that it is nearly always pleasurable to read, sentence by sentence, the prose gorgeous in places, the detail granular and vivid...Barack Obama has...illuminated a pivotal moment in American history -- Chimamanda Ngozi Adichie ― The New York Times

Deeply introspective and at times elegiac... [it] isn't the usual post-presidential legacy-burnishing project. There is a literary grandness... and dramatic renderings of moments high and low captured in sometimes Sorkin-esque dialogue...The narrative puts the reader in the room at defining moments -- Eli Stokols ― LA Times

701 pages of elegantly written narrative, contemplation and introspection, in which he frequently burrows down into his own motivations... A Promised Land delivers amply on the basic expectations of political autobiographies, providing a granular view from the driving seat of power. There are also the gratifying details observed in moments of historic import -- Julian Borger ― The Guardian

A supremely intelligent, accomplished man . . . Obama emerges as kind to his staff, devoted to his children and absolutely in love with his wife -- Tim Stanley ― The Telegraph

A classy book and not just one for insiders...[Obama] reminds us what it was like having a sense of magnanimity and modest statesmanship in the White House. Welcome home, decency -- James Hanning ― inews.co.uk

Obama's is a beautifully written memoir...and covers his childhood through to the assassination of Osama bin Laden in 2011, which is written up like a thriller...it's probably the best volume of autobiography from a former president in modern times. As a reminder of a face of America it is invaluable -- Sean O'Grady ― Independent, *****

The author of Dreams from My Father - his lyrical 1995 account of his tangled mixed-race upbringing in Hawaii and Jakarta - has not lost his narrative touch. This memoir is beautifully written and disarmingly candid...leavened with telling asides, poignant vignettes, painterly character sketches and an occasional corker of a joke -- Tony Allen-Mills ― The Sunday Times

A riveting, deeply personal account of history in the making-from the president who inspired us to believe in the power of democracy

Barack Obama was the 44th president of the United States, elected in November 2008 and holding office for two terms. He is the author of two previous New York Times bestselling books, Dreams from My Father and The Audacity of Hope, and the recipient of the 2009 Nobel Peace Prize. He lives in Washington, D.C., with his wife, Michelle. They have two daughters, Malia and Sasha.
Read more

4.9 out of 5 stars
4.9 out of 5
6,408 global ratings
How are ratings calculated?
To calculate the overall star rating and percentage breakdown by star, we don’t use a simple average. Instead, our system considers things like how recent a review is and if the reviewer bought the item on Amazon. It also analyses reviews to verify trustworthiness.

Prashant Sinha
5.0 out of 5 stars Candid story telling from a Genius.
Reviewed in Australia on 22 November 2020
Verified Purchase
Amazing read...Enjoying the candid story telling covering an honest account of background scenery that happened at the highest level. Still long way to go in finishing this book, but I know it will get more interesting from where I got to in last 2 days of getting my hands on this much awaited book.
Read more
One person found this helpful
Helpful
Comment Report abuse

Verinder Mehta
5.0 out of 5 stars Great read
Reviewed in Australia on 22 November 2020
Verified Purchase
Obama is just an effortless communicator, whether writing or speaking, he is just fantastic to listen to and read. Thoroughly enjoyed this purchase and made all the better by a prompt service from Amazon.
Read more
One person found this helpful
Helpful
Comment Report abuse

Michael
5.0 out of 5 stars Modern history Biography
Reviewed in Australia on 1 December 2020
Oh, what a joy. A memoir by the first black President of the United States in his inimitable, gentle style. The intellect, humanity, compassion and philosophy are on show as he recounts his years in the Whitehouse. Beginning with some of his early journey, the book’s focus is really on 2007 when he announced his candidacy until 2010 with the Bin Laden raid. Originally intended as a 500-word book, this first volume is over 700 pages but a most pleasant read none-the-less. A great first-hand of recent history, from the man who gave us decency and intelligence in world leadership, deservedly a 5-star plus rating.
Read more
Helpful
Comment Report abuse
See all reviews

Pebbles
5.0 out of 5 stars Absolutely a great read! Refreshing! :-)
Reviewed in the United States on 18 November 2020
Verified Purchase
If you would like to see and read an educated person speak his truth and hide nothing in the process, this is the book to purchase. It is refreshing to read something a book from a Great President of this time. With all the drama and racism his' family had to deal with in the WH, shows how mature they truly are. He still managed to be a kind spirit to anyone and everyone he has met, so far. Compared to the people who have turned it into a Fun House, full of clowns. This book is very enlightening to his' life and to his' journey. So, thank you Mr. President for all of you and Ms. First Lady hard work! Keep up the good work, Mr. Obama. God bless you and your lovely family!
Read more
1,563 people found this helpful
Report abuse

JC
1.0 out of 5 stars Racial identity so important
Reviewed in the United States on 20 November 2020
Verified Purchase
I wish Obama had spent more time on how he created divisive racial separation to advance his agendas. He glossed over how he promulgated how all blacks are victims even though he was President and we have a black supreme court justice, a black attorney general, a black national security advisor, etc. Always a victim.
Read more
3,011 people found this helpful
Report abuse

Mrs. Books
5.0 out of 5 stars Well worth the wait!
Reviewed in the United States on 18 November 2020
Verified Purchase
I just received it today, so am just getting into it. It doesn't disappoint! It allows one to re-live the presidency of a man whose decency and integrity so many took for granted, but who more people grew to appreciate after witnessing and living through the horror of the president that came after Obama! So wonderful to be able to relive the moments through the elegant writing of one of the world's most admired men, whose legacy of Obamacare lets us know that Obama cared for the citizens of the country he sincerely led. Thank You President Obama! Thank You for setting an excellent example for our children, and for continuing to invest in the youth of this nation!
Read more
1,016 people found this helpful
Report abuse

James M.
1.0 out of 5 stars Boring!!!!!
Reviewed in the United States on 24 November 2020
Verified Purchase
Boring!!!!!!!!
Read more
689 people found this helpful
Report abuse
See all reviews
Get FREE delivery with Amazon Prime
Prime members enjoy FREE Delivery and exclusive access to movies, TV shows, music, Kindle e-books, Twitch Prime, and more.
> Get Started
Back to top
Get to Know Us
Make Money with Us
Let Us Help You
And don't forget:
© 1996-2020, Amazon.com, Inc. or its affiliates