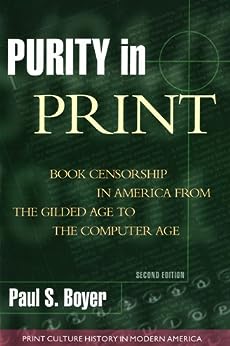 by Paul S. Boyer (Author) Format: Kindle Edition
See all formats and editions
Sorry, there was a problem loading this page. Try again.

The first edition of Purity in Print documented book censorship in America from the 1870s to the 1930s, embedding it within the larger social and cultural history of the time. In this second edition, Boyer adds two new chapters carrying his history forward to the beginning of the twenty-first century.

"Boyer . . . writes with insight and sophisticated wit . . . [about] the emergence of courageous and controversial publishers after World War I, the effect of Nazi book burnings, and the failure or reticence of librarians . . . to be in the anti-censorship vanguard. . . . The best literary, social, and ethical history of [book censorship in] the U.S."--Choice

The best literary, social, and ethical history of book censorship in the U.S. - Choice ""Boyer has traced the confusions, the ironies, and the sometimes humorous and sometimes tragic effects of American efforts to cope with the question of what is permissible and what is taboo in the public morality and in the printed word."" - George K. Smart, American Quarterly --This text refers to the paperback edition.

Paul Boyer is the Merle Curti Professor of History at the University of Wisconsin-Madison. His many books include Salem Possessed (with Stephen Nissenbaum), By the Bomb's Early Light, When Time Shall Be No More, and Fallout. He is editor in chief of The Oxford Companion to United States History.

--This text refers to the paperback edition.
Read more

RDD
5.0 out of 5 stars Excellent Study of Censorship in America!
Reviewed in the United States on 16 February 2018
Verified Purchase
Discussing post-war censorship, Boyer writes, “In the early postwar period, as the courts adopted an increasingly permissive stance in the sexual arena, repressive efforts rooted in Cold War fears of radicalism and subversion characterized the nation’s public life. Even in the realm of sexual expression, the Supreme Court’s permissive rulings, coupled with mass-culture products offering more and more explicit descriptions and representations, triggered a sharp reaction in conservative and religious circles. This, in turn, stimulated renewed demands for censorship” (pg. 281-282). Discussing the Smith Act, Boyer writes, “In its heyday, however, the domestic anticommunism campaign, involving all three branches of the federal government, local governments, and various private organizations, resulted in gross and sustained violations of many citizens’ First Amendment rights, including freedom of speech and freedom of the press. In a 1953 Gallup Poll that asked whether a person ‘known to favor communism’ should be permitted to deliver a speech, 29 percent of Americans said yes, 67 percent, no” (pg. 285). Writes Boyer, “In 1952, Democratic Congressman Ezekiel C. Gathings of Arkansas chaired a ‘select committee on current pornographic materials.’ The highly publicized 1954 hearings on juvenile delinquency conducted by Senator Estes Kefauver of Tennessee devoted much attention to pornography, including violent and salacious comic books, issuing an alarming report on Obscene and Pornographic Materials. Putting a dollar figure on the menace, it estimated the annual traffic in mail-order pornography at $500 million” (pg. 288). Boyer notes that Americans typically formed voluntary groups for handling these issues (pg. 292-293). He sets the 1950s and early 1960s resurgence in censorship “against a backdrop of increasing political and social conflict” (pg. 293). Boyer concludes, “In the three decades from 1945 through the mid-1970s, public attitudes and legal rulings in the U.S. relating to censorship followed two interrelated and partially contradictory trajectories. On the one hand, through the mid-1960s the court, and to a more limited extent the public at large, grew more tolerant of cultural material dealing with sex, and more willing to extend First Amendment protection to a wider range of materials. In response, the volume and explicitness of such material entering the cultural mainstream increased exponentially. Simultaneously, a counter-trend of repressiveness, present throughout the period, grew in momentum from the mid-1960s on” (pg. 316).
Read more
Report abuse
See all reviews
Back to top
Get to Know Us
Make Money with Us
Let Us Help You
And don't forget:
© 1996-2021, Amazon.com, Inc. or its affiliates