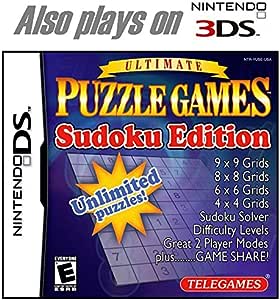 Brand: Telegames
Platform : Nintendo DS
4.3 out of 5 stars 57 ratings
Currently unavailable.
We don't know when or if this item will be back in stock.

UNLIMITED NUMBER OF PUZZLES - VIRTUALLY INFINITE NUMBER OF PUZZLES, THANKS TO AN INTERNAL ALGORITHM THAT RANDOMLY GENERA TES MILLIONS OF PUZZLES. FOUR GRID LAYOUTS. USES TOUCH SCREEN AND STYLUS. MULTIPLE DIFFICULTY SELECTIONS, INCLUDING SECTIONS FOR YOU

4.3 out of 5 stars
4.3 out of 5
57 global ratings
How are ratings calculated?
To calculate the overall star rating and percentage breakdown by star, we don’t use a simple average. Instead, our system considers things like how recent a review is and if the reviewer bought the item on Amazon. It also analyses reviews to verify trustworthiness.

JD
4.0 out of 5 stars Not perfect
Reviewed in Canada on 10 August 2013
Verified Purchase
Didn't like it as much as the one I had but still okay to play and that is what i think
Read more
Report abuse

Stevens
5.0 out of 5 stars THE BEST, I LOVE IT!!
Reviewed in the United States on 4 March 2009
Verified Purchase
The Ultimate Puzzle Games - Sudoku Edition is the best Sudoku software I have tried. It has many choices for puzzles: the Classic 9 x 9 grid with Easy, Medium, Hard and Extreme levels of difficulty.

It offers also the Eight 8 x 8 or Mini 6 x 6 grid with Easy and Medium levels. Has also a Junior grid which is a 4 x 4 with an Easy level. It offers from the very basic, beginner level to the extreme hard puzzles.

If you get interrupted and cannot finish the game, YOU CAN SAVE IT if for later by pressing the START button on the DS console. A Menu opens offering a Game sub-menu with choices for Restart Puzzle, Solve Puzzle or Quit. Next is the Options sub-menu with the choices for SAVE, Reset Best Time, Music, ERROR HIGHLIGHT, Background and How to Play.

Besides this, when playing the game you have on the screen icons that allow you to pencil-in or erase candidates, erase entries, undo last move or redo last move.

I have played the Sudokus that come with the BRAIN AGE games and prefer the ones from the Ultimate Puzzle Games Sudoku Edition. The BRAIN AGE software frequently has trouble recognizing the numbers I am trying to pencil-in or enter, showing a 9 when I am trying to enter a 4, a 1 instead of a 7, and so on. It is quite annoying. With the Ultimate Puzzle Games Sudoku Edition I DON'T HAVE THIS PROBLEM, the numbers are tapped in, they are not "written" by hand.

Also, the BRAIN AGE Sudokus do not offer the different kinds of Sudoku puzzles the Ultimate Puzzles Sudoku Edition offers, nor do they have the unlimited number of puzzles this software can create.

The Ultimate Puzzle Games Sudoku Edition software is the one I prefer and I highly recommend it as the best.
Read more

Larson Juhl
4.0 out of 5 stars Very Good Sudoku game for DS
Reviewed in the United States on 13 April 2008
Verified Purchase
My wife and I have been playing the Ultimate Puzzle Games Sudoku game for the DS for a few months now. We both like to play at the Hard difficulty setting. At the Extreme difficulty setting, I can't solve some of the puzzles logically, even though I've scoured the Internet for sudoku tips. After several bad experiences, I'm inclined to think that at least some of these Extreme puzzles aren't really fair, in the sense that they don't have solutions that can be found without guessing.
What makes this game so much more fun than the sudoku in Brain Age 2 is 1) you don't have to run a gauntlet of annoying nonsense to get started with the sudoku game, 2) you can very quickly enter small numbers into a bunch of boxes by simply tapping each box in succession (once you've touched the two appropriate keys to the left of the screen) and 3) you can just as easily remove small numbers from a bunch of boxes by tapping each one (once you've touched the three appropriate keys to the left of the screen). Since you're going to need to use small numbers to solve puzzles at the Hard level, having an efficient method for adding and removing these numbers makes the game more enjoyable.
My main reservation about this game is that, as mentioned above, at least some of the Extreme puzzles seem to be impossible to solve logically. I wish I knew more about sudoku puzzle design, but it seems to me that a good sudoku puzzle must be a product of a human mind, rather than something generated by a computer. Since these puzzles are supposedly generated randomly by the software, that may account for the appearance of unsolvable puzzles at the Extreme setting.
Addendum:
After writing this review, I've learned a little more about solving Extreme puzzles. For one thing, I've found that even my local newspaper prints some level 4 puzzles that cannot be solved using the techniques I learned on-line. The newspaper provides a link to a web site, [...], which explains most of the techniques that I previously learned, and - when these techniques don't work - actually recommends guessing to solve more difficult puzzles! I didn't know that it was OK to guess. However, even though it's possible to solve puzzles by guessing, I don't think it's fun to play that way, so I'm sticking to the Hard difficulty setting with this game.
Incidentally, another nice feature of this game is that it allows you to enter a sudoku game you might find in a book or newspaper and solve it using the DS machine, which is easier than writing and erasing small numbers on paper.
Read more
41 people found this helpful
Report abuse

CheriJ
5.0 out of 5 stars Just challenging enough to be lots of fun
Reviewed in the United States on 18 March 2017
Verified Purchase
Love this! Fun games with lots of variation and unlimited combinations. It's a nice way to keep my brain busy without being overly taxing--keeps me from getting bored while traveling or waiting in doctors' offices. I bought the game for my old Nintendo DS, but I'm happy to see it will also work in the new 3DS XL I'm planning to splurge on. Very enjoyable!
Read more
One person found this helpful
Report abuse

Arnim Zola
3.0 out of 5 stars Ugly Interface. NOT the best Sudoku for the DS
Reviewed in the United States on 3 December 2008
Verified Purchase
This is my 4th Sudoku game for the DS. I actually bought it for a relative but had the chance to try it myself a few times.

- Unlimited sodoku puzzles which are generated by the program.

- This has a really ugly interface. The best I've seen for the DS is still in Brain Age and Brain Age 2. The screen is not easy to read. The software uses an ugly font that will slow you down. Some of the buttons confused my relative, an older casual gamer.

- The optional wallpapers/backgrounds are ugly and distracting.

- As mentioned earlier, the sodoku puzzles that you spend several minutes entering can't be played. The program will solve them for you but you can't play it. Why? This is bizarre. It would have been great if you could enter a sudoku puzzle from the newspaper and then take advantage of the option to alert you if you make an error. But nope, go find a pen to solve the newspaper sudoku puzzle instead.
Read more
20 people found this helpful
Report abuse
See all reviews
Get FREE delivery with Amazon Prime
Prime members enjoy FREE Delivery and exclusive access to movies, TV shows, music, Kindle e-books, Twitch Prime, and more.
> Get Started
Back to top
Get to Know Us
Make Money with Us
Let Us Help You
And don't forget:
© 1996-2020, Amazon.com, Inc. or its affiliates