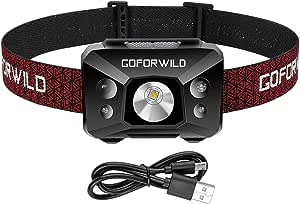 Brand: GOFORWILD
4.6 out of 5 stars 907 ratings
Secure transaction
Returns Policy
Amazon-managed Delivery
Your transaction is secure
We work hard to protect your security and privacy. Our payment security system encrypts your information during transmission. We don’t share your credit card details with third-party sellers, and we don’t sell your information to others. Learn more
Amazon-managed Delivery
Amazon manages delivery by using preferred couriers/agents. Order delivery tracking to your doorstep is available
New (2) from $21.66

CAUTION: Don't use high-power charger(over 5W) to charge the headlamp, it may cause the Overheat and Permanent Damage to the product.

4.6 out of 5 stars
4.6 out of 5
907 global ratings
How are ratings calculated?
To calculate the overall star rating and percentage breakdown by star, we don’t use a simple average. Instead, our system considers things like how recent a review is and if the reviewer bought the item on Amazon. It also analyses reviews to verify trustworthiness.

Damo A.
4.0 out of 5 stars So far so good
Reviewed in Australia on 5 May 2020
Verified Purchase
Used this twice so far.

The light is brilliant! Literally! Turning it on, even on the lowest setting, will illuminate trees 100m away in the dark. Aside from the central spot, it has a wider dimmer arc of around 20 degrees, which is fine for general peripheral vision without blinding yourself.

So far, I've used this for putting the bins out, which was a revelation in terms of being able to walk up the drive to the street with a completely lit view of everything around whilst using both hands.

I also did a run along a steep forest track after dark, and again, I had perfectly well lit vision ahead and to the sides, without it being blinding.

Minor niggles are that it's quite thick and heavy, and that weight caused it to shift a little on my head - while thudding down a tarmac 1:10 hill! Otherwise, in normal running, or track running, it didn't shift at all. The band and light were comfortable against my head for 20 mins each time, and didn't shift. The light can be pointed downwards in increments so you can light a bit closer to your feet.

The one design fault I've found so far, is 'hand wave' on/off sensor. It's a brilliant idea, and it worked really well in turning on/off easily whilst moving the bins without wanting to shine into my neighbours' houses, and without needing to fumble for the on/off switch. BUT - the problem is that it turns on/off instantly as you wave your hand in front of the torch, and the beam *turns on to illuminate your hand just a few cm in front of the light*! Thus you get the full power of the torch bounced off your hand right back into your eyes, blinding you!! They could have done better to have put a 0.5s delay before turning it on. I've taken to closing my eyes tightly, which still isn't enough, when waving my hand.

Otherwise the hand sensor is also pretty reliable - I had the sensor on whilst running up and down hills, and in 15 mins it didn't inadvertently turn on once.

eli
5.0 out of 5 stars so far so good
Reviewed in Australia on 24 March 2020
Verified Purchase
Very happy so far (3 weeks in, everyday use). Very comfortable and bright light - we are being careful not to let the battery drain completely (as per instructions), all rechargeable batteries state not to run the battery out completely so no difference in this one. Great product.
Read more
Helpful
Report abuse

R Beale Wallace
5.0 out of 5 stars Great features and rechargeable
Reviewed in Australia on 23 August 2020
Verified Purchase
It is a great head light and rechargeable, I purchase 1 and was so impress I purchased a 2nd one for a gift for friend.
Read more
Helpful
Report abuse

Amazon Customer
5.0 out of 5 stars Very good product and good value.
Reviewed in Australia on 6 May 2020
Verified Purchase
Very good quality. Charging least about 10 his of continuous use, easy to operate and good features.
Read more
Helpful
Report abuse

Ray Silcox
5.0 out of 5 stars Very Bright and has long battery life
Reviewed in Singapore on 2 October 2020
Verified Purchase
Delivery was swift and my purchase was just as described. good quality and fair priced
Read more
Report abuse

G. Langley
5.0 out of 5 stars Long press the button on the right!
Reviewed in the United States on 11 November 2019
Verified Purchase
I was about to give this light a 4 star rating, then I read the first question (as of now). I hate it when these lights start off with the brightest white light setting and cycle through other white light settings to get to red. By the time you do that, you have destroyed your night vision, which is what the red light is for!
Now that I am reminded that a long FIRST press will turn on the red light, I'm ready to give it five stars. I also chose to have a USB rechargeable light because I'm tired of throwing away batteries and worrying about having spare batteries when I need them.
Now all I have to do is remember the long press if I don't want to go straight to brightest white.
Read more
46 people found this helpful
Report abuse

Kindle Customer
5.0 out of 5 stars Librarian's Helper
Reviewed in the United States on 30 July 2019
Verified Purchase
I am a librarian in a library that is also an archive of historical materials. Parts of it between rows of shelves are a bit dark and book spine labels are difficult to read. I wear my headlamp when searching for titles and it surely does help. This has become an essential tool for everyday use. It is very bright and puts out a plenty of light. I haven't used the motion detector yet.
Read more
39 people found this helpful
Report abuse

Derek A
5.0 out of 5 stars This is better than lights several times the price!
Reviewed in the United States on 1 October 2019
Verified Purchase
I didn't expect a whole lot from thos light given the price. Well I was very very wrong! This light is incredible! It is super bright! I ise it when I go night fishing and it lights up the whole area. The motion sensor to turn it iff and on is very responsive, never having to wave my hand more than once. A full charge will last a long time. I've used it for a couple nights in a row, easily several hours of use, turning it on and off and the battery lasts! And the fact that it is rechargeable just puts it so far above most other lights in this price range. And it is durable, I've dropped it multiple times with no ossues. This is a no brainer, BUY IT!!!
Read more
32 people found this helpful
Report abuse

EWJ
4.0 out of 5 stars Good headlight - worth the prize but does not live up to the hype
Reviewed in the United States on 3 January 2020
Verified Purchase
I use the headlamps for running in the morning and winter camping. I have had it for 3 months. The headlamp max is really around 345 lumens measured not the 500. Given what I use it for 340 lumens is good enough. I have used Black Diamond, Fenix, and Petzl flash, bike, and headlights. This lamp with the ability to wave your hand to turn it off and on makes it worth the price. It is half the price of the others around 325-350 lumens. Two issues why it did not get 5 starts. 1. It is nowhere near the 500 lumens, I would have expected at least 450 lumens. 2. The red light function is almost useless, most times you use it to not blind people at night or for being able to view the night sky without needing to adjust your eyes. Am I glad I got it, yes.
Read more
3 people found this helpful
Report abuse
See all reviews
Pages with related products. See and discover other items: Best Rated in Torches, Best Rated in Headlamps
Get FREE delivery with Amazon Prime
Prime members enjoy FREE Delivery and exclusive access to movies, TV shows, music, Kindle e-books, Twitch Prime, and more.
> Get Started
Back to top
Get to Know Us
Make Money with Us
Let Us Help You
And don't forget:
© 1996-2020, Amazon.com, Inc. or its affiliates