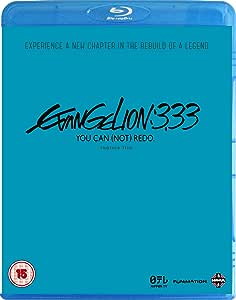 Please note this is a region B Blu-ray and will require a region B or region free Blu-ray player in order to play.

After the 'Third Impact', Shinji awakens to an existence he does not recognise. Earth lies in ruins. Those he once fought valiantly to protect have cruelly turned against him. With Rei Ayanami nowhere to be seen, could his efforts to save her have been in vain - and what friendships can he now rely on? Trapped in a harrowing cycle of death and rebirth, Shinji continues to courageously battle the Angels - even as the world spirals toward a tragic end.

4.3 out of 5 stars
4.3 out of 5
113 global ratings
How are ratings calculated?
To calculate the overall star rating and percentage breakdown by star, we don’t use a simple average. Instead, our system considers things like how recent a review is and if the reviewer bought the item on Amazon. It also analyses reviews to verify trustworthiness.

Rich T
5.0 out of 5 stars Still room for development
Reviewed in the United Kingdom on 2 March 2016
Verified Purchase
I've waited 24 hours after viewing to write this review. Usually I write them straight after. Why the delay? I had to decide what I really thought. I really liked the original series, platinum version, its mix of existential angst, moral philosophy and mecha mayhem were fantastic. This rebuild has been good in parts and dreadful in equal measure. The character rewrites and uneven tone threw me. Fourteen years after forcing his son to bring about the third impact Shinji awakens to a changed world. It's an uneven film, fans of the franchise will love the lore and mystical elements present in the first 40 minutes, the ending feels like fan service and mecha mayhem thrown in to keep things moving. Shinji self-hatred still stains the development, he's still exceptionally whiny, but at least it's short lived. The plot asks more questions which the final part will find hard to answer if someone doesn't reign in the messy exposition and choose a direction for the film to follow. I liked it, but it won't be everyone's idea of what Evangelion should be.
Read more
3 people found this helpful
Report abuse

Callum
4.0 out of 5 stars Good film. Mind bending. Not much else.
Reviewed in the United Kingdom on 25 September 2018
Verified Purchase
This is going to be a review of the case and extra content because I assume that, if you are thinking about buying this show, you've already seen it and have decided you liked it enough to purchase the physical copy.
The case is nothing special. Holds the discs and has nice artwork, can't ask for much else.
It does have some extra feature but nothing that is interesting.
It's going cheap at the moment so worth getting it you like the film.

Mr. F. T. Saffre
2.0 out of 5 stars Good-looking nonsense
Reviewed in the United Kingdom on 25 May 2016
Verified Purchase
Saying that this 3rd part of the Evangelion "reboot" favours form over content is a gross understatement: visually nice but utterly nonsensical! A collection of graphically stunning and emotionally charged scenes strung together in seemingly random order without any discernable plot. Maybe you need to be high to enjoy it... I didn't!
Read more
2 people found this helpful
Report abuse

Amazon Customer
1.0 out of 5 stars It's in Italian
Reviewed in the United Kingdom on 14 November 2020
Verified Purchase
It is in Italian and you cant change it to English
Read more
Report abuse

Andrew Webb
5.0 out of 5 stars A must buy for Evangelion Lovers
Reviewed in the United Kingdom on 6 July 2016
Verified Purchase
Fantastic continuation to the series. Like end of Evangelion took me a couple of time watching this to understand what happened and what is going on.
Read more
Report abuse
See all reviews
Get FREE delivery with Amazon Prime
Prime members enjoy FREE Delivery and exclusive access to movies, TV shows, music, Kindle e-books, Twitch Prime, and more.
> Get Started
Back to top
Get to Know Us
Make Money with Us
Let Us Help You
And don't forget:
© 1996-2020, Amazon.com, Inc. or its affiliates