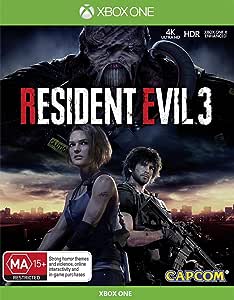 Witness the climactic events of Raccoon city in a completely reimagined Resident Evil 3. This highly demanded follow-up in the 94 million unit selling franchise comes on the heels of the award-winning Resident Evil 2, and completes the Raccoon city story Arc. Resident Evil 3 will also include the online 4VS1 asymmetric multiplayer experience Resident Evil resistance. In Resident Evil 3, S.Toa.R.S. Member Jill Valentine, One of video games' Most iconic heroines, flees a city being consumed by zombies and other horrifying creatures. Built with capcom's proprietary Re engine, Resident Evil 3 uses modernized gameplay to combine action with classic survival horror in vivid high-definition. Jill's harrowing experiences in Resident Evil 3 take place in the nightmarish hours leading up to and following the events in Resident Evil 2, shedding new light on the plight of Raccoon city's residents. Every hope of escape is cut off by another Star in the Resident Evil franchise: the towering bio organic weapon Nemesis. This brutal yet intelligent monstrosity uses an arsenal of high-powered weaponry to indiscriminately eliminate any surviving S.Toa.R.S. Members in the city - with Jill being his final target.

It’s time for the final escape

A series of strange disappearances have been occurring in the American Midwest within a place called Raccoon City. A specialist squad of the police force known as S.T.A.R.S. has been investigating the case, and have determined that the pharmaceutical company Umbrella and their biological weapon, the T-Virus, are behind the incidents - though they've lost several members in the process. Jill Valentine and the other surviving S.T.A.R.S. members try to make this truth known, but find that the police department itself is under Umbrella's sway and their reports are rejected out of hand.

However, soon reports of a grisly "cannibal virus" begin to surface, and vicious dogs begin roaming the streets. With the viral plague spreading through the town and to her very doorstep, Jill is determined to survive. However, unbeknownst to Jill, an extremely powerful pursuer has already been dispatched to eliminate her.

Chris Mugavin
2.0 out of 5 stars Half hearted follow up to the excellent RE.2 remake
Reviewed in Australia on 6 April 2020
Verified Purchase
Short, took all of 5hrs on the first play through, linear and underwelming compared the previous entry. Way more action focused, with a rather bland story arc. Where RE.2 left me wanting to play it again and then again after my first run, after finishing RE.3 I switched off the game and probably wont touch it again. Very disappointed, wait for a really deep discount if your disperate to play.
Read more
One person found this helpful
Helpful
Comment Report abuse

Giggly Giggles
TOP 1000 REVIEWER
5.0 out of 5 stars Resident evil 3
Reviewed in Australia on 3 May 2020
Verified Purchase
Resident evil 3 remake is a remake done right because the difficulty in this game is perfect and the graphics are amazing
Read more
Helpful
Comment Report abuse

ianwheller1988
4.0 out of 5 stars Great game but.....
Reviewed in Australia on 14 April 2020
Verified Purchase
Great, but way to get easy to complete on normal mode. Advanced mode is ridiculous!
Read more
One person found this helpful
Helpful
Comment Report abuse
See all reviews from Australia
Get FREE delivery with Amazon Prime
Prime members enjoy FREE Delivery and exclusive access to movies, TV shows, music, Kindle e-books, Twitch Prime, and more.
> Get Started
Back to top
Get to Know Us
Make Money with Us
Let Us Help You
And don't forget:
© 1996-2020, Amazon.com, Inc. or its affiliates