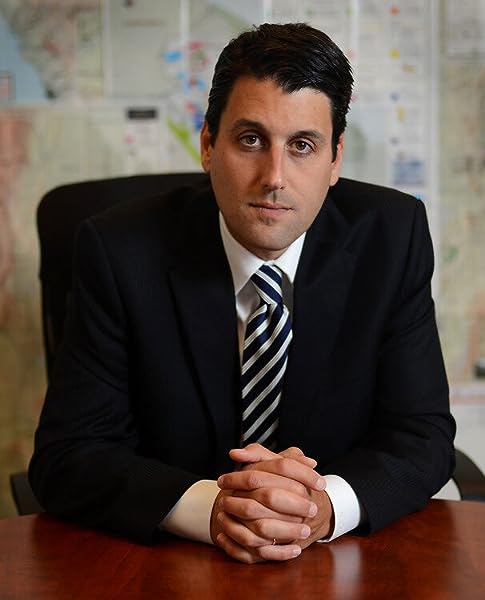 The Rise of America: Remaking the World Order Paperback – 16 May 2021

by Marin Katusa (Author)
4.4 out of 5 stars 172 ratings
See all formats and editions
Sorry, there was a problem loading this page. Try again.
Great on Kindle
Great Experience. Great Value.

As a new president takes office in 2021, America is deeply divided politically and socially, while the economy seems precariously balanced on increasingly shaky legs.

Doom and gloom is the predominant sentiment in America. It has become widely accepted within the investment, political, and media sectors that America is on the decline and that China will drive the global agenda in the 21st century.

To which I say, not so fast. This book carefully examines the trends and actual hard data from the economic, geopolitical, financial, and demographic spheres and comes to an inescapable conclusion: America’s future has never been brighter.

Forged in the 20th century, America’s leadership role will expand in the 21st century, resulting in a substantial rise in the standard of living, not just for Americans but also across the world.
Read more
Previous page
Next page

Marin Katusa is the author of The New York Times bestseller The Colder War. Over the last two decades, he has become the largest independent financier in the resource sector globally. Katusa has visited over 500 resource projects in over a hundred countries. His insights have been featured in The Wall Street Journal, The New York Times, Bloomberg, and CNBC. He publishes his unique resource strategies and research at www.katusaresearch.com.
Start reading The Rise of America: Remaking the World Order on your Kindle in under a minute.

Marin Katusa is one of the leading experts on--and most successful portfolio managers in--the energy and resource exploration sectors.

Katusa has rubbed elbows with energy ministers, generals, oligarchs, and billionaires all over the world. He's strapped on a flak jacket to survey lucrative projects in Russia, Iraq, Ukraine, Kuwait, Mongolia, Kosovo, Colombia, and many other dangerous yet resource-rich jurisdictions that require the protection of heavily armed private security forces.

Starting out as a mathematics professor, Katusa left academics to apply his models to portfolio management. His funds are among the top-performing in the resource sector over the last five years in Canada. He's a regular contributor to the Business News Network (BNN), and has been interviewed by global media outlets such as CNBC, RT, CBC, Bloomberg, and Forbes.

Katusa first became interested in the energy sector through investing. He began in mining, shifted to Uranium, and began to see the unconventional energy sector as a much bigger story.

Since 2007, Katusa has been serving as the chief energy investment strategist for Casey Research. He is one of the most active financiers for early-stage, junior resource companies in Canada, and was the lead financier in the first two financings for Cuadrilla Resources, now one of the largest and most successful unconventional natural-gas plays in the UK. He also structured the financing and the sale of Turkana and the world-class 10BB oil block in Kenya to Africa Oil, a Lundin-held company with a market capitalization of over C$2 billion. Katusa is a founding director of Copper Mountain, Canada's third-largest copper mine.

Over the years, Katusa has been involved in raising over C$1 billion in capital for early-stage and producing resource companies.

Katusa speaks fluent Serbian and Croatian, and is conversant in Russian. A graduate of the University of British Columbia, he lives in Vancouver.

4.4 out of 5 stars
4.4 out of 5
172 global ratings
How are ratings calculated?
To calculate the overall star rating and percentage breakdown by star, we don’t use a simple average. Instead, our system considers things like how recent a review is and if the reviewer bought the item on Amazon. It also analyses reviews to verify trustworthiness.

P Foo
5.0 out of 5 stars A Breath of Fresh Air Amongst Doomsayers and Naysayers
Reviewed in Australia on 9 July 2021
Verified Purchase
I found the book to be very educational It covers financial history and shows that not all is doomed as is the current mood. Marin soundly explains and backs his claims with calm and sound logic.
Read more
Helpful
Report abuse

CPC
5.0 out of 5 stars Awesome! Needs to be on Audible!
Reviewed in Australia on 30 June 2021
Verified Purchase
Great positive book...would love to have it on audible as well.
Read more
Helpful
Report abuse
See all reviews

Ann Yates
5.0 out of 5 stars You learn something new every day.
Reviewed in the United Kingdom on 29 June 2021
Verified Purchase
I had not heard of MMT Modern Monetary Theory before so now I know what may lie ahead.
Read more
Report abuse

Amazon Customer
5.0 out of 5 stars Worth the time & money
Reviewed in the United Kingdom on 27 May 2021
Verified Purchase
Very informative & thought provoking.
This book deserves multiple re-reads in order to fully absorb the considerable amount of information contained.

Simon
5.0 out of 5 stars The most important book I've read in years
Reviewed in Canada on 26 May 2021
Verified Purchase
I am a financial educator so my entire world is based on instilling financial discipline and global macroeconomics. I am constantly looking for anything that could help my clients or myself. Sometimes its math, an original idea, or just plain good hard data presented in a brilliant manner. In this case its most of the book.

What Marin has crafted is so novel, and so original that by the time you're done reading, you'll have a much more broadened perspective of the global geopolitical, economical and social atmosphere of America. Loved this book, it was super easy to read, and you'll have no problem digesting it in one or two sessions. Highly recommended.

daddycool
4.0 out of 5 stars A good book to gain an overview of the current macroeconomic picture of the world.
Reviewed in India on 22 July 2021
Verified Purchase
I liked the fact that Marin advocates a practical approach to investing rather than wishful thinking.
He says that the clean energy sector will get a lot of money from the government and huge spending on infrastructure upgrade and technology upgrade in the US. The money will be printed out of thin air by the FED by using a so called Modern Monetary theory(MMT) which allows unlimited currency creation. Government will collect taxes just to maintain faith in the dollar and not to pay back the government debt. Ultimately the dollar may collapse in the distant future as MMT fails.
The summary is that America is not going to decline as the world power anytime soon since dollar is the world reserve currency and enjoyed unrivalled dominance in the international markets. China will not replace America anytime soon. The rise of america will help other countries as well.

Ultimately the dollar will collapse of unlimited money keeps on. but that time is far away and this is the message from this book.
Read more
Report abuse

Great points of view by an investor who is a visionary. I hope he is right about America.

Don't expect to hear these views on the 6 o'clock news anytime soon. But at least you can say
you have been warned in advance.

Mr. Katusa, if your reading this review, thank you for writing this crystal ball book, your style of writing is very entertaining, and it really opened up my mind.
Read more
Report abuse
See all reviews
Back to top
Get to Know Us
Make Money with Us
Let Us Help You
And don't forget:
© 1996-2022, Amazon.com, Inc. or its affiliates