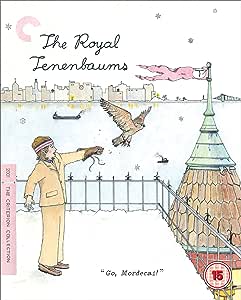 Royal Tenenbaum (Unforgiven’s GENE HACKMAN) and his wife, Etheline (Prizzi’s Honor’s ANJELICA HUSTON) had three children - Chas, Margot, and Richie and then they separated. Chas (Meet the Parents’ BEN STILLER) started buying real estate in his early teens and seemed to have an almost preternatural understanding of international finance. Margot (Shakespeare in Love’s GWYNETH PALTROW) was a playwright and received a Braverman Grant of $50,000 in the ninth grade. Richie (Rushmore’s LUKE WILSON) was a junior champion tennis player and won the U.S. Nationals three years in a row. Virtually all memory of the brilliance of the young Tenenbaums was subsequently erased by two decades of betrayal, failure, and disaster. The Royal Tenenbaums is a hilarious, touching and brilliantly stylized study of melancholy and redemption from WES ANDERSON (The Darjeeling Limited).

4.8 out of 5 stars
4.8 out of 5
657 global ratings
How are ratings calculated?
To calculate the overall star rating and percentage breakdown by star, we don’t use a simple average. Instead, our system considers things like how recent a review is and if the reviewer bought the item on Amazon. It also analyses reviews to verify trustworthiness.

Slowlearner
3.0 out of 5 stars It didn't do it for me
Reviewed in the United Kingdom on 2 April 2020
Verified Purchase
I see other people liked this film, so all I can say is it didn't do it for me. Good performances all round but it was like a near-miss Woody Alan movie. Not awful, but I was a bit bored and did not find the characters interesting or engaging. Gene Hackman was in fine form as usual, but even his character (the father of a dysfunctional family of "geniuses") varies from dull to vaguely unpleasant. Bottom line: no laughs.
Read more
One person found this helpful
Report abuse

Ross P. Hyland
5.0 out of 5 stars Another excellent Wes Anderson finally on Region "B"...... Now for Life Aquatic and Rushmore!!
Reviewed in the United Kingdom on 21 June 2018
Verified Purchase
21st June 2018..... and the very helpful Mr Mulvaney from Criterion has advised that RUSHMORE is soon be released as a Region "B" Blu Ray.... (finally).

Also, for your interest, there is already a release of "The Life Aquatic with Steve Zissou" as a region "B" release due for shipping in a few days (25th June 2018.)

This release of The Royal Tenenbaums is excellent...... Wes Anderson is incapable of making a bad film!

Random Tandem
4.0 out of 5 stars A window on a strange family
Reviewed in the United Kingdom on 24 July 2013
Verified Purchase
The description of this film left me unsure what to expect, but I was pleasantly surprised and rather enjoyed its left-field humour. The basic premise of a dysfunctional family attempting to right some wrongs and restore themselves is of course not new to film-making. But some of the extreme twists and turns of how this particular family go about things is hugely bizarre. Within many families there will be topics that remain out of bounds for various reasons; this family has them in abundance!

Seeing Gene Hackman in a comedy role was unexpected, but he pulled it off with aplomb. I already knew he was a great actor, but this uncharacteristic part further reinforced my admiration. Gwyneth Paltrow also shone very brightly, giving a great turn as a former child prodigy turned nervous wreck adult. Throughout this film there is a succession of events that should generate light chuckles, which build its momentum and carry it along rather well. There are also a couple of mood-changing darker moments which linger in the air, to make you wonder whether laughing was appropriate. A clever ploy. Recommended
Read more
4 people found this helpful
Report abuse

Jordan
5.0 out of 5 stars Good film
Reviewed in the United Kingdom on 23 February 2019
Verified Purchase
Good film, the Criterion blu-ray improves the picture quality substantially and the colors are massively improved. Lots of extras, though I wish they included information on how long each special feature is as some of the interviews are up to an hour long.
Read more
Report abuse

jackie jayes
5.0 out of 5 stars Ten out of Ten
Reviewed in the United Kingdom on 24 May 2020
Verified Purchase
One of Wes Anderson's best films thanks to the top class cast i.e. Gene Hackman(superb) even Ben Stiller usually a pain to watch isnt out pf his depth usual quirky Anderson plot,dialogue all add up to an enjoyable watch
Read more
Report abuse
See all reviews
Get FREE delivery with Amazon Prime
Prime members enjoy FREE Delivery and exclusive access to movies, TV shows, music, Kindle e-books, Twitch Prime, and more.
> Get Started
Back to top
Get to Know Us
Make Money with Us
Let Us Help You
And don't forget:
© 1996-2020, Amazon.com, Inc. or its affiliates