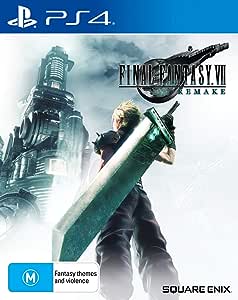 Daniel Minge
1.0 out of 5 stars Great game, poor pre-order experience.
Reviewed in Australia on 14 April 2020
Verified Purchase
Look, I love the game, it's just, when you offer pre-order DLC (Chocobo Chick Summon), which for the record was offered on ALL standard game pre-orders, then advise in a chat that you never offered any Pre-order content for the game. It leaves a bitter taste in the mouth.

Well, it's not like my $10 store credit will give me the pre-order DLC.

Would happily increase to a higher rating if the actual code was provided.

Old Grim's Reviews
TOP 100 REVIEWER
5.0 out of 5 stars This re-imagining of a beloved classic from the 90s was well worth the wait!!
Reviewed in Australia on 8 April 2020
Verified Purchase
Well, since it was first teased as a tech demo for the PS3 way back in 2005 (a year before the PS3 console launch), the years ticked by until its official announcement for the PS4 in 2015, I knew it would still be a long wait. Hype was tempered with the disappointment of Final Fantasy 15, a game (as Versus XIII) announced the same year as that infamous tech demo failed to live up to what was promised. So I worried this would befall VII's Remake, as well, and kept my hype to an absolute minimum.

And what Square Enix has delivered with this "Remake" is noting short of majesty. Tetsuya Nomura left heading FF15 to spearhead the Directing on FF7R. And what was clearly 15's loss became 7's gain.
This version is more than a Remake. It is truly a re-imaging. The story only takes place on Midgar, as this is the first of a yet determined number in a series of games in the Remake. Yet it will be expanded upon and added to, as the Midgar section of the original was only about a 5th of the games length.
The production values on this game are breathtaking. Not only does this thing looks absolutely stunning, it plays seamless. No frame tips even in the heat of battle.
The game play sees a departure of the turn based of the original for more of an action flavor, yet there is still some tactical options to be had. FF7R is a action/ ATB hybrid. and it works beautifully. You are always on your toes in combat. and while you technically control one character in your party at a time you can give orders with R2 on the fly to select targets or to heal a team member. I loved the original 7, it is an all time top 10 game for me, yet I never ever felt pressured in combat. (Outside of a few Weapon battles) That is something that cannot be said about this version. You always feel in the moment.

The story has seen a few tweaks here and there and, at least for this version, it is for the better The fully fledged cast of Jesse, Biggs and Wedge is truly amazing to see... and well... yeah, that's gunna hurt more. Barret has probably seen to worst change. Maybe his obnoxious, zealot attitude towards his belief in freeing the planet wasn't has cringy when I read the dialogue instead of hearing it spoken and preached.

Gee, I could go on forever but just know, this is one amazing game that was well worth the wait. Do not be on the fence with this one, grab it when you can.

NOTE: thank you to Amazon for the next day shipping, the ETA for this was for mid April because of the online demand because of how crazy everything is right now in the world, so to have this arrive on my door when I wasn't expecting it for another week, it really made my year to date. So once again, thank you!!
Read more
One person found this helpful
Helpful
Comment Report abuse

Coxy
4.0 out of 5 stars Awesome game, definitely recommend if you loved the original.
Reviewed in Australia on 10 April 2020
Verified Purchase
Brilliant Remake of a classic. Game is absolutely amazing in every detail.
My only negative opinion is that I was under the impression that all standard Pre-ordered came with the pre order DLC.
Not sure if this was supposed to be a code in the box or if Amazon are sending it.
However the game is only released today so maybe they will send soon.
Read more
2 people found this helpful
Helpful
Comment Report abuse

Andy
1.0 out of 5 stars Where is the DLC code?
Reviewed in Australia on 10 April 2020
Verified Purchase
Where is the DLC bonus? The Q&A clearly states chocobo chick materia included!?
Read more
4 people found this helpful
Helpful
Comment Report abuse

Charlie
1.0 out of 5 stars Did not come with DLC
Reviewed in Australia on 27 April 2020
Verified Purchase
Did not come with preorder bonus even though I preordered through Amazon. Very disappointed as it was extremely misleading with the description. Would not preorder with amazon again.
Read more
2 people found this helpful
Helpful
Comment Report abuse

Jellycookie
TOP 1000 REVIEWER
5.0 out of 5 stars Proper remaster
Reviewed in Australia on 9 April 2020
Verified Purchase
Unlike the majority of "remastered" games, Final Fantasy VII remake looks and feels just as good as any 2020 release.

Just be aware that this game is just 1/3 of the story.
Read more
Helpful
Comment Report abuse

Nisson
5.0 out of 5 stars Excited but not happy.
Reviewed in Australia on 3 April 2020
Verified Purchase
I really happy when it finally come,but i remember that i choose deluxe not regular. But when it come, i got regular. Quite disappointed actually or maybe there's explaination for this.
Read more
Helpful
Comment Report abuse
See all reviews from Australia
Get FREE delivery with Amazon Prime
Prime members enjoy FREE Delivery and exclusive access to movies, TV shows, music, Kindle e-books, Twitch Prime, and more.
> Get Started
Back to top
Get to Know Us
Make Money with Us
Let Us Help You
And don't forget:
© 1996-2020, Amazon.com, Inc. or its affiliates