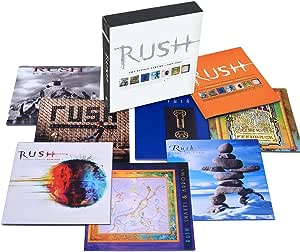 Secure transaction
Your transaction is secure
We work hard to protect your security and privacy. Our payment security system encrypts your information during transmission. We don’t share your credit card details with third-party sellers, and we don’t sell your information to others. Learn more
Details
Ships from
Amazon UK
Sold by
Amazon UK
New (12) from
$38.74 + $3.00 Delivery

This year's celebration of Rush continues with the highly anticipated release of a remixed version of the band 2002's album VAPOR TRAILS. In 2009, two tracks from VAPOR TRAILS ( One Little Victory and Earthshine ) were remixed for the Retrospective III collection, setting fans into a frenzy in anticipation of a possible remixed version of the entire album being released one day. Four years later, that day is finally approaching.

"Vapor Trails was an album made under difficult and emotional circumstances - sort of like Rush learning how to be Rush again - and as a result, mistakes were made that we have longed to correct. David Bottrill's remixes have finally brought some justice and clarity to this deserving body of our work, says Geddy Lee.

"Every song has been given a new life, from the fire of One Little Victory, Secret Touch, and Ceiling Unlimited to the melodic musicality of Sweet Miracle and How It Is ... these songs have been redeemed. Thank you David!"

The remixed version of VAPOR TRAILS will also be included in the new 7-disc boxed set THE STUDIO ALBUMS 1989-2007, which features every studio album Rush recorded for Atlantic Records. The collection includes the Gold & Platinum albums Presto (1989), Roll The Bones (1991), Counterparts (1993), and Test For Echo (1996), as well as their covers EP Feedback (2004) and the Billboard Top 5 album Snakes & Arrows (2007). THE STUDIO ALBUMS 1989-2007 features each album presented in a wallet sleeve that faithfully reproduces the original artwork (except for VAPOR TRAILS, which features a reinterpreted version of the original cover) and is available on October 1st from Atlantic/Rhino.

4.7 out of 5 stars
4.7 out of 5
710 global ratings
How are ratings calculated?
To calculate the overall star rating and percentage breakdown by star, we don’t use a simple average. Instead, our system considers things like how recent a review is and if the reviewer bought the item on Amazon. It also analyses reviews to verify trustworthiness.

Amazon Customer
5.0 out of 5 stars Hardcore Rush fans only.
Reviewed in the United Kingdom on 18 December 2018
Verified Purchase
All the greats and some not so...
You cannot deny the talent of Rush.
A 3 piece legendary band that has survived
and out lived more supergroups known to man...ok, maybe not the Rolling Stones then.
Every tune has that distinct Rush sound.
I thought I had heard every song that they had produced and immortalised in vinyl.
Not so.. this is there studio albums from 1989 to 2007 so none of their more
reknown albums like..
"2112" "Moving pictures" "A farewell to kings" etc... Apart from that, this boxed set
makes the grade with the "Feedback" covers album alone imo. Not that many gems, but enough to compliment your
existing Rush collection. A steal really.

GSJF
5.0 out of 5 stars WatchingRUSH documentary for R40 took me back,and brought me back into the fold..
Reviewed in the United Kingdom on 24 January 2020
Verified Purchase
I first saw RUSH in a not quite sold out Liverpool Empire in the late 1970's..and followedtheir career for about 10 years..but lost track. To be honest I only bought this catch up box set,after seeing the documentary on them on SKY,and hearing of Nei Pearts death.
I can remember the amazing amount of pedals that bass and lead guitar went through. that made this 3 piece sound like a rock orchestra. at the Empire,and the deep thud of the bass through the venues floor that nearly knocked you over,and stopped your heart..Also the mammoth drum kit..and the drummer with the cavalier moustache.
Well any chance of reseeing them live again,has now sadly gone with Neil's death.But they do leave behind them a wealth of material for fans new and old to get into,or back into..this 7 cd set appart from neing staggerringly great value.more or less brings me up to date..and I look forward to hammering the volume on the cd player..
At last I will be able to hear the sound closer to what it was meant to sound like ,as the vinyl,though good never did have the dynamic range..
Read more
4 people found this helpful
Report abuse

Amazon Customer
5.0 out of 5 stars commit to streaming at your peril!!
Reviewed in the United Kingdom on 5 August 2020
Verified Purchase
This is a great album and the music is 5stars...although not the best from rush still extremely good. WARNING follows- I bought the box set with the download. I got it for the download because I had the albums on cd anyways,..I wanted to listen on my mobile. I am a prime member and the mp3 is free for prime members so I should be able to stream it for free...but I want to own it as an mp3 file for ease of use on the phone listening..when the tracks ain't available with my prime membership anymore!!
after a while only 20 out of 80 tracks were showing and no talking with customer service solved the issue...so I paid for the mp3 again...27 quid...and guess what...it still didn't play without huge issues...tracks vanished...playing the wrong songs ..etc..etc.
..they jumped to give the refund , but only 1 refund not 2. ..so in the end I got 2 copies of these album's on cd and no mp3 download!!..which was what I bought it for in the first place. I also should be able to play it for free because it's free with prime, and I am a member who pays annually...so what's the lesson...don't buy it if it's available for free with your prime membership, it will be a problem playing it for some reason as this happens with all the mp3 albums a bought separately from prime..
won't play properly again and you'll end up at tidal because you just want it to work as it should. I prefer the Amazon music app for sure but the lack of a stress free experience will cause you to leave as I unfortunately had to and I was an Amazon fan until repeated issues wore me down. ..and I was going to restart my hd subscription again soon...major rethink due now I'm with tidal which has had no issues yet. said my piece. done.
p.s.
update...after a month of faultless tidal I came back to Amazon music hd. Within 24 hrs I was having major track skipping issues....just restarted tidal . bye.
Read more
3 people found this helpful
Report abuse

Philip Dootson
5.0 out of 5 stars Rush didn't make any bad albums
Reviewed in the United Kingdom on 21 July 2019
Verified Purchase
I was a child of the seventies so grew up listening to my older brothers records Rush where one band i used to enjoy, he had all the vinyl albums up to Moving pictures but as i grew up and discovered other music Rush where shelved for a while and only revisited intermittently over the years. I was aware that they had made many albums down through the decades so my curiosity led me to check some of this out so i saw this boxset and for a mere £16 i thought if i didn't like it then i hadn't really lost much,however on the first listening of these albums in chronological order i was astonished just how good they are,when i read some reviews of Rush albums there are a couple included in this collection i was expecting to be poor even the much maligned Test for echo which according to most polls i had seen was considered their worst album is in my opinion rather good which leads to the question "if Test for echo is their worst album how good can the others be?" the answer in my opinion is pretty damn amazing!
Read more
5 people found this helpful
Report abuse

Paul
5.0 out of 5 stars Rush just keep it going!
Reviewed in the United Kingdom on 11 June 2020
Verified Purchase
I have been a fan of Rush since the late 70’s, since first hearing 2112 and then seeing the band on the Moving Pictures tour in 1981 and I have to say I was totally blown away that night. I have been a fan ever since but must admit to loosing interest after the Signals album. I have played every Rush album from 2112 to Signals regularly since the early 80’s but didn’t even know any of the albums after Hold Your Fire.
I decided to purchase this box set of 7 CD’s after reading the many positive reviews , but was worried I would play a few of the cd’s, think ‘none of them are a patch on the 70’s and early 80’s Rush albums’ then put the whole box set in a drawer and forget about it.....
However i am still playing all the CD’s from this box set and enjoying each and every one. The ‘later’ Rush have moved on from the early 80’s but then bands who have staying power need to do just that.
So I won’t do reviews of each album, as many reviewers on this page have already done so in greater detail than I could. My favorite from the box set so far is Roll The Bones, closely followed by Test For Echo. It’s a real treat to play
7 albums I have never heard before from one of my favorite bands. So I absolutely give this Box set 5 stars.
My all time favorite Rush album is still Hemispheres but if you are an ‘early’ Rush fan, do not pass this box set by.
RIP Neil.
Read more
2 people found this helpful
Report abuse
See all reviews
Back to top
Get to Know Us
Make Money with Us
Let Us Help You
And don't forget:
© 1996-2021, Amazon.com, Inc. or its affiliates