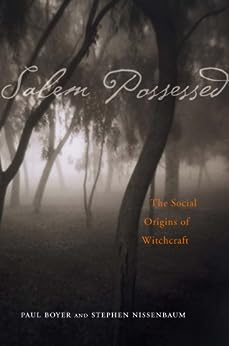 The authors' whole approach to the Salem disaster is canny, rewarding, and sure to fascinate readers interested in that aberrant affair.-- "The Atlantic" --This text refers to the audioCD edition.

Paul Boyer was Merle Curti Professor of History at the University of Wisconsin-Madison.

Stephen Nissenbaum received his AB from Harvard College, his MA from Columbia University, and his PhD from the University of Wisconsin. He has taught at the University of Massachusetts, Amherst since 1968, and is currently professor of history there. He has been the recipient of fellowships from the National Endowment for the Humanities, the American Council of Learned Societies, the American Antiquarian Society, the Massachusetts Historical Society, and the Charles Warren Center at Harvard. In addition, he was James P. Harrison Professor of History at the College of William and Mary, 1989-90.

Norman Dietz is a writer, voice-over artist, and audiobook narrator. He has won numerous Earphones Awards and was named one of the fifty "Best Voices of the Century" by AudioFile magazine. He and his late wife, Sandra, transformed an abandoned ice-cream parlor into a playhouse, which served "the world's best hot fudge sundaes" before and after performances. The founder of Theatre in the Works, he lives in Lancaster, Pennsylvania.

4.6 out of 5 stars
4.6 out of 5
103 global ratings
How are ratings calculated?
To calculate the overall star rating and percentage breakdown by star, we don’t use a simple average. Instead, our system considers things like how recent a review is and if the reviewer bought the item on Amazon. It also analyses reviews to verify trustworthiness.

Wyrd One
4.0 out of 5 stars Four Stars
Reviewed in the United Kingdom on 11 August 2017
Verified Purchase
A well structured and researched insight into the social environment of the colony in the seventeenth century.
Read more
Report abuse

Amazon Customer
5.0 out of 5 stars a nuanced and detailed account of the witchcraft trials
Reviewed in the United States on 19 July 2021
Verified Purchase
The book is totally absorbing, a well-written account of a polarized period in history. It's too easy to dismiss such times as crazy aberrations, but seeing all the factors that influence people's behavior allows us to learn from the past. I read this to understand some family genealogy, and it filled the bill. However, the story is worth reading for anyone interested in history, New England, how distrust grows and how healing takes place. Excellent!
Read more
Report abuse

Amanda
4.0 out of 5 stars Great source of information and interesting read
Reviewed in the United States on 12 June 2016
Verified Purchase
I needed this book for my capstone paper. My topic was figuring out if Parris sparked the trials to secure his place in the community. This book was perfect since it explores the social problems and situations of Salem to help explain the trials. The book reads very easily and is just all together interesting, even as just a fun read.
Read more
3 people found this helpful
Report abuse