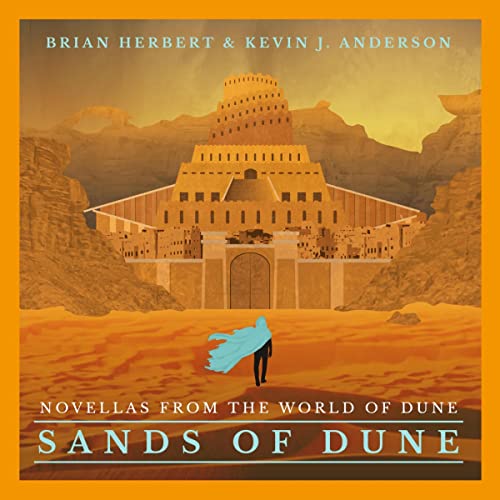 Sands of Dune: Novellas from the World of Dune

Collected for the first time, these Dune novellas by bestselling authors Brian Herbert and Kevin J. Anderson shine a light upon the darker corners of the Dune universe. Spanning space and time, Sands of Dune is essential listening for any fan of the series.

The world of Dune has shaped an entire generation of science fiction. From the sand-blasted world of Arrakis, to the splendor of the imperial homeworld of Kaitain, readers and listeners have lived in a universe of treachery and wonder.

Now, these stories expand on the Dune universe, telling of the lost years of Gurney Halleck as he works with smugglers on Arrakis in a deadly gambit for revenge; inside the ranks of the Sardaukar as the child of a betrayed nobleman becomes one of the Emperor's most ruthless fighters; a young firebrand Fremen woman, a guerrilla fighter against the ruthless Harkonnens, who will one day become Shadout Mapes.

Switch between reading the Kindle book & listening to the Audible narration with Whispersync for Voice.
Get the Audible audiobook for the reduced price of $10.99 after you buy the Kindle book.
Learn more about membership
By completing your purchase, you agree to Audible’s Conditions Of Use and Privacy Notice.
Sold and delivered by Audible, an Amazon company

4.2 out of 5 stars
4.2 out of 5
90 global ratings
How are ratings calculated?
To calculate the overall star rating and percentage breakdown by star, we don’t use a simple average. Instead, our system considers things like how recent a review is and if the reviewer bought the item on Amazon. It also analyses reviews to verify trustworthiness.

Jim Arrowood
5.0 out of 5 stars Four Excellent Tales From The Dune Universe
Reviewed in the United States on 13 July 2022
Verified Purchase
This is a collection of four novellas from the Dune universe intended to add some perspective to the series’ mythos. The four stories are about events that took place outside of the tale told in the full novels by Frank Herbert and the team of Brian Herbert and Kevin J. Anderson.

In this volume, the four stories are:

The Edge of a Crysknife: What was the Shadout Mapes like before she became the head housekeeper for the Atreides? Well, she was a fierce Fremmen warrior. This is a great tale, and many say it is their favorite in the book.

Blood of the Sardukar: Even though the Padishah Emperor Shaddam IV is complicit in the Baron Harkonnen killing Duke Leto Atreides, he has ordered that the Duke not be tortured and made to suffer before he dies. A Sardukar warrior has taken it upon himself to see that Shaddam's wishes are carried out. Mostly seen as merciless killers, this particular Sardukar's background has allowed him to keep a certain amount of compassion.

The Waters of Kanly: In this tale, Gurney Halleck is at the center. He knows the Duke has been captured and killed and thinks the same has happened to the young Paul and his mother, the Lady Jessica. He has taken up with a band of smugglers and is using them to further his vow to avenge himself upon the Harkonnen for the Duke and Paul, as well as what they did to him before he came into the employ of the Atreides.

Imperial Court: A tale set ten-thousand years before the events in Frank Herbert's Dune, It chronicles more of what took place between the Atreides and Harkonnens to make them blood enemies.

I enjoyed all the four stories, but my favorite was The Waters of Kanly.

As one would expect, these are all well-written stories with a lot of action involving characters Dune fans would know, and some new ones we only see in this volume. It is well worth the time to pick this up if you are a fan of the extended Dune universe.

What I enjoyed the most was how well these stories dovetail right into the universe with the same feeling I get when reading any of the books in the saga. Whenever I pick up new material, I always feel like I am getting a visit from friends I haven’t seen for a while. The stories contained in this volume are all entertaining and after I finished reading, I wanted more.

Just a little side note here. I was recently in a local Starbucks for a coffee break. I happened to have on a t-shirt that depicted a sandworm and a group of Fremmen around it. On the back is printed the litany against fear. The young woman who was getting my order together asked me if my shirt was about Dune. Of course, I answered that it was, and we had a brief conversation about how both us enjoyed the new film. It would appear there is a Dune revival currently taking place, and no one is happier about that than I am.

FeralCat
4.0 out of 5 stars Four Novellas
Reviewed in the United States on 20 July 2022
Verified Purchase
Each of the four novellas stands alone and cover a wide span of years. They were all good and fleshed out some side characters while exploring the Harkonnen/Atratries feud. My only fault, and it's a minor one, is that the 4th Novella takes place the earliest in the Dune time line.
Read more
Report abuse

Tuck
3.0 out of 5 stars VERY small book but OK
Reviewed in the United States on 19 July 2022
Verified Purchase
2 of the stories were pretty good: Mapes and Gurney. The other 2, meh. Just wish those 2 good ones were longer. Very high price for such a small book (not even an inch thick).
Read more
Report abuse
See all reviews