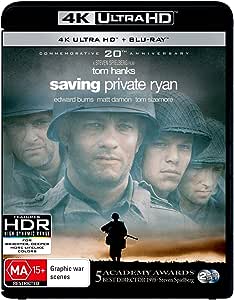 IN THE LAST GREAT INVASION, OF THE LAST GREAT WAR, THE GREATEST DANGER FOR EIGHT MEN. WAS SAVING ONE. Internationally acclaimed by critics and audiences alike, Saving Private Ryan, directed by Steven Spielberg, is an unforgettable film achievement that has had a profound and lasting impact throughout the world. Winner of five Academy Awards - including Best Director (Spielberg) - Saving Private Ryan also garnered two Golden Globe Awards for Best Motion Picture (Drama) and Best Director. Seen through the eyes of a squad of American soldiers, the story begins with World War II's historic D-Day invasion, then moves beyond the beach as the men embark on a dangerous special mission. Captain John Miller (Tom Hanks) must take his men behind enemy lines to find Private James Ryan (Matt Damon), whose three brothers have been killed in combat. Faced with impossible odds, the men question their orders. Why are eight men risking their lives to save just one? Surrounded by the brutal realities of war, each man searches for his own answer - and the strength to triumph over an uncertain future with honour, decency, and respect.|Steven Spielberg's Oscar winning, epic, World War 2 drama is set against the backdrop of the Normandy landings. A squad of American soldiers, led by Captain John Miller (Tom Hanks), receive top-level instructions to undertake an unusual mission: to rescue Private James Ryan (Matt Damon), whose three brothers have all been killed in action. As the soldiers forge deeper into enemy territory, they begin to question the sense of risking life and limb for the sake of one man.

Kjaouad
5.0 out of 5 stars Awesome
Reviewed in Australia on 5 December 2019
Verified Purchase
For me the best atmos movie just for that normandie scene
Read more
Helpful
Comment Report abuse

DJ Control
TOP 1000 REVIEWER
5.0 out of 5 stars Lest We Forget
Reviewed in Australia on 6 June 2019
I don't normally write "movie reviews". I'm more interested in the quality of the sound and picture for home video and find opinions on whether this movie is better than that one personal or subjective at best. This one is an exception.

Director Steven Spielberg has made three films to date directly concerning the Second World War. One a comedy, "1941" and the other two, straight out historical dramas, "Schindler's List" and "Saving Private Ryan".

On this 75th anniversary of the landing of Allied troops at Normandy, also known as D-Day, take some time to remember those who sacrificed so much, so that we could have a better world to live in. If you perhaps need a history lesson in some of the events that occurred during this time, have a look at "Saving Private Ryan". It's not a true story (it's actually based on a story about brothers who fought in Vietnam) but it's set within the context of factual events.

Steven Spielberg won an Oscar for best director in 1998 when this film was made and his mark is in every frame. The story is told with such passion and conviction that you could be forgiven for believing it IS a true story. See this movie, learn a little about the sacrifices made by so few for the greater good of the world and take from it what you will. Yes the first 15 minutes are very heavy going but I believe it is one of the best films ever made. A very personal and subjective opinion.


Read more
One person found this helpful
Helpful
Comment Report abuse
See all reviews
Get FREE delivery with Amazon Prime
Prime members enjoy FREE Delivery and exclusive access to movies, TV shows, music, Kindle e-books, Twitch Prime, and more.
> Get Started
Back to top
Get to Know Us
Make Money with Us
Let Us Help You
And don't forget:
© 1996-2020, Amazon.com, Inc. or its affiliates