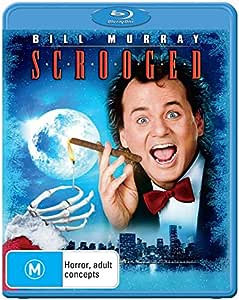 Festive comedy starring Bill Murray as Frank Cross, a network TV president and modern day Scrooge who is always looking out for number one. One night, as Christmas approaches, he is visited by three zany ghosts including the Ghost of Christmas Past (David Johansen) and a violent Ghost of Christmas Present (Carol Kane). The cast also includes John Forsythe, Karen Allen and Miles Davis.

4.8 out of 5 stars
4.8 out of 5
1,940 global ratings
How are ratings calculated?
To calculate the overall star rating and percentage breakdown by star, we don’t use a simple average. Instead, our system considers things like how recent a review is and if the reviewer bought the item on Amazon. It also analyses reviews to verify trustworthiness.

Mr. J. J. Brett
4.0 out of 5 stars A great update of a classic story
Reviewed in the United Kingdom on 27 December 2011
Verified Purchase
I love this movie. It's one of my top ten Christmas films. Yes, Bill Murray pretty much plays himself. Yes, the ending is too sentimental in a way that only Americans can do. No, it doesn't matter. Dickens's story never fails to engage. The relocation of the action to 1980s New York with a curmudgeonly TV exec' in the lead role works really well. The ghosts are refreshingly different with the exception of Christmas yet-to-be who probably only ever really works as a faceless shrouded figure.

The story should be familiar to all by now and Scrooged follows the premise fairly closely. Frank Cross (Murray) has achieved his current exalted position by sacrificing his personal life, his family and his girlfriend on the altar of ambition. He marks Christmas Eve by authorising a horrific TV trailer for a live showing of A Christmas Carol even though it has caused the death of an elderly viewer. He sacks another exec' played by Bobcat Goldthwaite for disagreeing with him and forces his PA to work late even though she has a doctor's appointment for her son who cannot speak. Goldthwaite's character and his rapid descent into alcoholic decrepitude are interspersed with Murray's adventures with the ghosts. Despite Goldthwaite's weird vocal delivery and his previous form as a crazed baddie in Police Academy, he plays the nerdy exec well and it is difficult to imagine anyone else playing the part.

Murray retires to his office and is visited by the ghost of his old boss (a cue for some gruesome make up and prosthetics) who warns him that he will be visited by three ghosts. After some spooky shenanigans in a restaurant Murray is picked up by the ghost of Christmas Past who takes him back to 1955 a la Back to the Future in a ghostly Checker Cab. Here he sees his childhood, his early career and the love of his life played by Karen Allen. Then to the ghost of Christmas Present played by Carol Kane as a fairy with an irritating high voice and a penchant for violence. She shows Murray how his actions affect his overworked and underpaid PA and his brother whilst finding time to kick him in the 'nads and belt him in the face with a toaster. Finally the ghost of Christmas yet-to-be shows him the future if he doesn't change his ways. This ends with Murray actually finding himself in his coffin as it enters the crematorium before returning to reality to get shot at by Goldthwaite.

In between each ghostly visitation Murray interacts with various people including his brother, his ex-girlfriend, a rival exec from LA and three down-and-outs all of who help shape the change in his personality. Murray's journey also runs parallel to the live showing of A Christmas Carol being played out in the TV studio and Murray causes mayhem on set when he returns there after a ghostly experience. He also returns to the set after his Christmas epiphany and uses the opportunity to spread the word about the spirit of Christmas to the viewing multitudes. This is where the film descends into sentimental schmaltz but it's feelgood Christmas schmaltz so I don't mind.

There are loads of references to classic TV shows and the eighties setting doesn't date the film too much. My favourite scene is the restaurant one where Murray flips out after being served a Highball with an eyeball (by Grouty from Porridge of all people) and thinking one of the waiters has caught fire. Murray's pratfall as he leaves the restaurant is brilliant and never fails to make me laugh. The prelude with Lee Majors is a hoot and could've formed the basis for an actual movie. If you fancy a helping of Scrooge without the Victorian trappings then this film is for you. Top Christmas viewing.

Daemonik
4.0 out of 5 stars Best "Alternative" version (aside from the Muppets, of course!)
Reviewed in the United Kingdom on 25 January 2016
Verified Purchase
This is a great take on the classic Christmas Carol story. Bill Murray is at his manic best! Although the ending is a little OTT, hell, it is in the original story too. Rick Moranis plays a blinder as the whiskey-sozzled, shotgun-toting ex-employee who is suddenly confronted - and recruited - by the reformed Murray.
Well worth a watch!
Read more
6 people found this helpful
Report abuse

D.B.
4.0 out of 5 stars Blu Ray Review, slight flaw but "It's only mone'oney"
Reviewed in the United Kingdom on 19 February 2016
Verified Purchase
Looks and sounds like a new movie
It is a straight port from the same source as the dvd version though, it retains a piece of audio where Murry says "It's only money" but it sounds like a stretched audio tape and comes out as "It's only mone'oney"
the line is very distracting when you know and love the film so it is disappointing that it has come up again on this format
Read more
2 people found this helpful
Report abuse

ebenezer scrooge
5.0 out of 5 stars a great a christmas carol version movie
Reviewed in the United Kingdom on 10 August 2014
Verified Purchase
im a very big a Christmas carol fan ebenezer Scrooge is probably the one of the greatest literary characters of all time charles dickens always brings the strong characters to life
i really enjoyed this movie i feel the messages it gives out are quite universal and makes this dvd worth watching even on the hottest of summer days
Bill Murray does a great job as the main protagonist in this feature there is alot of emotion in this film i definately enjoy watching this movie its a great family movie

Sean S. White
4.0 out of 5 stars Video default language set to "German" or similar language???
Reviewed in the United Kingdom on 28 February 2020
Verified Purchase
Well the title of this review says it all.

I can't fathom it... I sent the first DVD back, and again the language default is German or something similar?

Excellent film nevertheless... 'highlight' of my Christmas, but then I was still recoiling from the election results and a Tory win, and Brexit probably going ahead.

Well, you gotta laugh or cry.

Keep fighting people!!!
Read more
Report abuse
See all reviews
Get FREE delivery with Amazon Prime
Prime members enjoy FREE Delivery and exclusive access to movies, TV shows, music, Kindle e-books, Twitch Prime, and more.
> Get Started
Back to top
Get to Know Us
Make Money with Us
Let Us Help You
And don't forget:
© 1996-2020, Amazon.com, Inc. or its affiliates