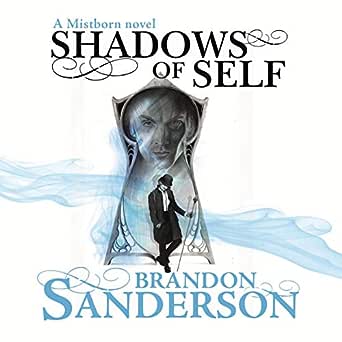 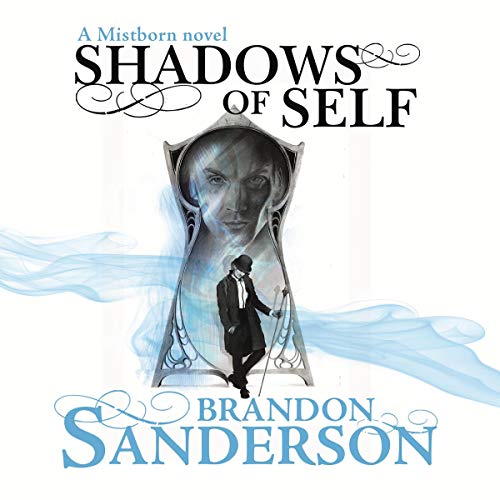 Shadows of Self: A Mistborn Novel

4.7 out of 5 stars
4.7 out of 5
2,176 global ratings
How are ratings calculated?
To calculate the overall star rating and percentage breakdown by star, we don’t use a simple average. Instead, our system considers things like how recent a review is and if the reviewer bought the item on Amazon. It also analyses reviews to verify trustworthiness.

Amazon Customer
4.0 out of 5 stars Covering all the bases with Aplomb! Action Fantasy Romance and Comedy
Reviewed in Australia on 27 March 2017
Verified Purchase
Very enjoyable being Australian love the use of mate and bloke in the text. Also Wayne's self effacing character has a sense of larrikinism that is a pleasure to read. Definitely like the introduction of technology and looking forward (pardon the pun ) to where it is heading.
The growing affection between Wax and Steris is fascinating as well . Cheers Crag
Read more
Helpful
Report abuse

Amazon Customer
5.0 out of 5 stars A must read
Reviewed in Australia on 30 December 2015
Verified Purchase
One of my favourite works by author Brandon Sanderson, Shadows of Self is a gripping novel that follows the events of the previous book, the Alloy of Law, with spectacular plot twists and chatacter development. I highly recommend this book to all readers, old and young. In fact I command you all to read this book, along with ALL of Brandon Sandersons books.
Read more
Helpful
Report abuse

Aranda Morrison
4.0 out of 5 stars Very good read.
Reviewed in Australia on 31 October 2015
Verified Purchase
I enjoyed getting familiar with Wax and Wayne again, that fun Sanderson humour is definitely present. Marasi Colms plays a large part in this instalment, as do the Kandra, which is nice. Doesn't quite match the epic feel of the original Mistborn trilogy, but that would be extremely difficult to achieve!
Read more
Helpful
Report abuse

Kindle Customer
5.0 out of 5 stars Emporer of fantasy
Reviewed in Australia on 15 May 2017
Verified Purchase
Sanderson is one of the best writers of the modern era, a true master of his craft. An absolute genius.
Read more
Helpful
Report abuse

Len ozzimo
5.0 out of 5 stars Five Stars
Reviewed in Australia on 13 February 2018
Verified Purchase
One of the best I’ve read in a long time
Read more
Helpful
Report abuse

FallenGrace
4.0 out of 5 stars Excellent follow up to Alloy of Law!
Reviewed in the United Kingdom on 28 September 2017
Verified Purchase
At the time of writing this the Mistborn series consists of two trilogies, the original trilogy set in an epic fantasy world and the Wax and Wayne triology in which Shadows of Self is book two set 300 years later in an almost wild west fantasy setting. I highly recommend you read the series from the start or many ideas and references will be lost on you if you have started from the Wax and Wayne books half way through.

Shadows of Self is an excellent read, I really enjoyed it though less than it's predecessor Alloy of Law. The storyline in a loose description follows the plot of a murderer in the city of Elendel having killed a large group of criminals at an underground auction. Lord Waxillium and his unofficial deputy Wayne get called to the scene and start to track the murderer down but they are no normal criminal using abilities that should be impossible they start to sow unrest through the city and time is low for Wax and his friends to stop them. The story is excellent and everything comes together in the end brilliantly. The characters are mostly developed well from the previous novel, especially Wayne and Marasi who both get a deeper look into their character over the course of the book and some of the new characters introduced here are also pretty interesting. Sadly I think Wax himself gets a little neglected despite being the lead character strangely, perhaps it's just because some sections are a little darker so there is a lot more brooding slowing things down at times.

The action scenes and Brandon Sanderson's fantastic magic system are as excellent as ever. I especially like how he tied in some aspects from the previous trilogy in this book and yet made them feel fresh for the new series. I don't want to say anything without spoiling anything but the way he gives his old formulas a new twist is well done keeping the theme of the world yet keeping things interesting.

All in all the series continues to be fun easy reading. The characters, action scenes and ideas are all excellent. If you liked the previous Mistborn books you'll probably enjoy this one, and if you haven't read them, you should.

+ Great story especially the ending.
+ Wayne and Marasi get good development.
+ Fresh twist on some of his old ideas.
+ Excellent action moments.

Victoria@CartonManetteDarnay
4.0 out of 5 stars I have mixed feelings about this book...
Reviewed in the United Kingdom on 17 July 2020
Verified Purchase
As the fifth book in the Mistborn series, or the second book in the Second Era series it's difficult to say much without spoilers. I can say that both series' are high fantasies where one can use certain powers after consuming certain metals. I have mixed feelings about this book because I found that the middle dragged a little, which messed up the overall pacing. However, something was revealed in the final few chapters that really changed my feelings for the book. Up until that point, I was really questioning the inclusion of a backstory but that reveal made everything make sense, and I found myself loving the book again. Ultimately it's still not as good as the original Mistborn trilogy, at least in my opinion, but I am most definitely warming to the series.
Read more
Report abuse

Alaran
4.0 out of 5 stars Elendel under threat
Reviewed in the United Kingdom on 4 November 2016
Verified Purchase
A fast paced and exciting read, the fifth Mistborn novel is much less in the realm of fantasy than the original trilogy and possesses less of a Western influence than the previous book. Although, unlike the others, ‘Shadows of Self’ is based virtually entirely within the city of Elendel, it still has the feeling of the wider Mistborn world and is a successful melding of crime fiction, political thriller, fantasy, western and superhero genres.

Due to the events of ‘Alloy of Law’ (which presumably take place not that long before this novel) Waxillium Ladrian is now part of Elendel society once more. Now working alongside the city constabulary, where their colleague Marasi is now employed, Wax and his sidekick Wayne find themselves investigating the mass murder of several of the city’s leading crime figures and gang members.

The early stages of the novel read a bit like a murder investigation but after some gruesome killings and acts of terrorism things become more of a thriller as Wax, Wayne and Marasi uncover a plot to assassinate the Governor. As the city devolves into a state of unrest it becomes clear that a wider political objective is at work and soon they all become inveigled in a political conspiracy that intends to bring down the city.

There is little expansion on the ‘metallic arts’, but by this point this elaborate and detailed magic system is firmly established. The emphasis in this novel is more on how the Kandra interact and utilise these abilities coupled with their own.

There are several connections to the first three Mistborn novels and small links to other works in Sanderson’s extended Cosmere. Even though more centred around a single episode/event than the other Mistborn novels, ‘Shadows of Self’ ties in more with the original trilogy than ‘The Alloy of Law’ and also with the short story set in the world of Mistborn, ‘Secret History’. There is, perhaps, less of a connection to ‘The Alloy of Law’ than might be expected. There is little involvement in the events of this book from Wax’s uncle and his organisation that Wax uncovers in the previous book.
Read more
One person found this helpful
Report abuse

Kindle Customer
4.0 out of 5 stars Good second instalment
Reviewed in the United Kingdom on 26 October 2015
Verified Purchase
I loved the first Mistborn series and was a bit worried about the new one. So far so good. The second book carries on with the same characters, and some old ones reappear. More is added to the plot surrounding Wax, his motivations and back story. A few hints are given about the larger picture concerning gods, powers, etc. Wax's uncle puts in a brief appearance but is not the main villain here. His plot is being saved for the next book. Some questions are answered while others are posed to keep you guessing. This is a good book in itself as any middle book of a trilogy should be. Looking forward to book three.
Read more
3 people found this helpful
Report abuse

HC
5.0 out of 5 stars More brilliance from Brandon!
Reviewed in the United Kingdom on 18 October 2015
Verified Purchase
I very much enjoyed the original mistborn trilogy......all Brandons magic concepts are novel, well thought out and brilliantly depicted (please do something else with the rithmatist idea!).......but I did find the story possibly a little heavy going and more standard 'end of world' fantasy fare.

Then came The Alloy of Law which is one of my favourite books ever....and Shadows of Self follows brilliantly. The major characters of Wax and Wayne are just superb...their interactions and complimentary skills and abilities are just wonderful for murder mysteries set in a Wild West turning into civilisation backdrop. Read these two books if you've ever enjoyed a good story! In fact read everything the man writes...he's a rusting genius.
Read more
8 people found this helpful
Report abuse
See all reviews
Back to top
Get to Know Us
Make Money with Us
Let Us Help You
And don't forget:
© 1996-2021, Amazon.com, Inc. or its affiliates