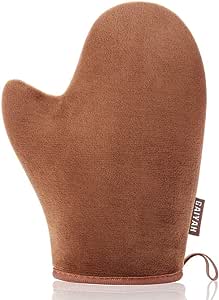 OFFER A 1 YEAR WARRANTY - 100% Satisfaction Guarantee! We're absolutely confident in the quality control and its durability! CLICK the "Add to Cart" Button and Get the Perfect Tan Now! How to apply self-tanner 1.Exfoliate. Use a washcloth to exfoliate the skin prior to applying a self-tanner. Using an exfoliating product also will help remove dead skin cells. 2.Dry your skin. Drying your skin before you apply a self-tanner helps it go on evenly. 3.Use Gaiyah self tan applicator mitt. Gaiyah tanning glove helps distribute product for a more even, natural-looking finish. Gaiyah suggests applying the product onto the palm of your mitt and then clenching your hand so the mitt folds and the product presses into the top half of the mitt. Then, apply it to your body using only the top part of the self tan mitt. This is especially important if youre applying it to your facethis way, youre lightly buffering the tan onto your face without it being too dark. Only small amounts are going on, and youre only getting a thin layer. 4.Apply in sections. Apply the self-tanner in sections (such as the arms, then legs, followed by the torso). Massage the self-tanner into your skin in a circular motion. 5.Blend at your wrists and ankles. For a natural look, you need to lightly extend the tanner from your wrists to your hands and from your ankles to your feet. 6.Dilute over your joints. Dilute the self-tanner on the knees, ankles and elbows, because these areas tend to absorb more self-tanner than the rest of the skin. To dilute, lightly rub with a damp towel or apply a thin layer of lotion on top of the self-tanner. 7.Give your skin time to dry. Wait at least 10 minutes before getting dressed. For the next three hours, it is best to wear loose clothing and try to avoid sweating. 8.Apply sunscreen every day. You still need to protect your skin with sunscreen.

Klaudia Sterna
5.0 out of 5 stars Super soft product
Reviewed in the United Kingdom on 21 April 2020
Verified Purchase
Absolutely fabulous self tanning mitt! It feels so soft and I can’t wait to use it, just waiting for a little warmer days to put my summer dress on. Highly recommend to everyone!
Read more

Witchy Woo
5.0 out of 5 stars Tan-tastic product! ☀️🧤
Reviewed in the United Kingdom on 14 June 2019
Verified Purchase
I love this tanning mitt, it’s like a really soft velour fabric, which glides over the skin with ease, & isn’t rough like some others I’ve used, which were a bit scratchy & irritating.

The mitt soaks up a fair amount of product - which isn’t necessarily a bad thing, but instead of applying more & more, make sure you use what’s already on it, it should make your tanning product spread further, a little seems to go a long way.

I like the fact that the mitt has a thumb, when I’ve used other mitts that didn’t have one, I found that they were more prone to slipping off my hand during tan application, I had no such problems with this mitt, it’s definitely a design improvement, making it much easier to use.

My only slight negative about the product was that it only just fit, it’s definitely on the snug side if you have large hands, but other than that, I’m delighted with it so far, it seems to wash well, & the little loop was quite handy, as I could hang it up to dry afterwards.

It was more than I realistically wanted to pay for a tanning mitt, but I think it was worth it, especially if it lasts me a while.

I’ve only used it once so far, but it made application of my tanning moisturiser really simple, & ensured that it was properly distributed, leaving me with a lovely, even, patch-free tan.

Shay
5.0 out of 5 stars Lined Glove
Reviewed in the United Kingdom on 31 July 2019
Verified Purchase
Bought this for the hubs. He said it's way better than he expected. The glove is lined inside with a thin plastic to prevent the product from seeping onto your hands. It's soft and usable on both sides. He has big man hands but was somehow able to get the glove on okay and was happy lol. I like that the bag it comes in is thick, resealable plastic. For only £4, we'll be sticking to this product ;)
Read more
18 people found this helpful
Helpful
Sending feedback...
Thank you for your feedback.
Sorry, we failed to record your vote. Please try again
Report abuse

Gabriela
5.0 out of 5 stars Good purchase
Reviewed in the United Kingdom on 31 January 2019
Verified Purchase
Everything I wanted. Awesome quality makes the process of spreading the tanning mousse so much easier. Helps to not leave marks over th body. Definitely a good purchase.
Read more
22 people found this helpful
Helpful
Sending feedback...
Thank you for your feedback.
Sorry, we failed to record your vote. Please try again
Report abuse
Load more international reviews

Constance Crane
5.0 out of 5 stars Love it!
Reviewed in the United Kingdom on 27 January 2020
Verified Purchase
Really comfortable and easy to use, spreads the product evenly and smoothly and the plastic lining inside the glove prevents the mousse seeping onto your hands when applying. Great value for money.
Read more

Liz
5.0 out of 5 stars Fabulous!!!
Reviewed in the United Kingdom on 21 October 2018
Verified Purchase
If only I'd bought this product before. The usual tanning mits last no time at all. This is sturdy and excellent quality. I imagine this will last for quite a long time? Vey pleased with this product.
Read more
22 people found this helpful
Helpful
Sending feedback...
Thank you for your feedback.
Sorry, we failed to record your vote. Please try again
Report abuse

Storkandshilling
5.0 out of 5 stars Best tanning mitt I have ever used
Reviewed in the United Kingdom on 30 May 2019
Verified Purchase
This mitt is gentle on your skin and really does apply your tanning product evenly and without streaks, lovely. My only quibble is that it could be slightly longer on your hand but that is easily remedied by putting an elastic band over it around your wrist.
Read more
17 people found this helpful
Helpful
Sending feedback...
Thank you for your feedback.
Sorry, we failed to record your vote. Please try again
Report abuse

Maria bailie
5.0 out of 5 stars Much better to use with the thumb.
Reviewed in the United Kingdom on 8 April 2019
Verified Purchase
The glove is really soft, does exactly what it says it does. Lot easier to use as it has the thumb in it, and it is soft on both sides. Arrived really quickly which was good too.
Read more
18 people found this helpful
Helpful
Sending feedback...
Thank you for your feedback.
Sorry, we failed to record your vote. Please try again
Report abuse

Sharon S
5.0 out of 5 stars 100% buy!!
Reviewed in the United Kingdom on 4 July 2019
Verified Purchase
The material of the mitt is so soft and so easy to use. The tan doesn’t absorb into the mitt which is brilliant as some of my other gloves have done. I will definitely be recommending to my friends.
Read more
17 people found this helpful
Helpful
Sending feedback...
Thank you for your feedback.
Sorry, we failed to record your vote. Please try again
Report abuse

Enigmatic Blonde
5.0 out of 5 stars Can't fault it!
Reviewed in the United Kingdom on 13 June 2019
Verified Purchase
Like everyone else has said its an excellent mitt. I'm thinking of buying the back pad too - so I'm more even.

It's soft, puts the tan on beautifully and is easy to wash.
Read more
16 people found this helpful
Helpful
Sending feedback...
Thank you for your feedback.
Sorry, we failed to record your vote. Please try again
Report abuse