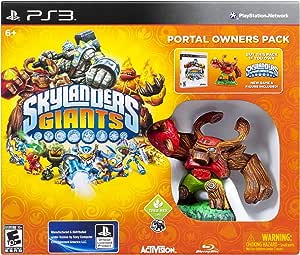 Ships from and sold by Amazon US.

4.4 out of 5 stars
4.4 out of 5
68 global ratings
How are ratings calculated?
To calculate the overall star rating and percentage breakdown by star, we don’t use a simple average. Instead, our system considers things like how recent a review is and if the reviewer bought the item on Amazon. It also analyses reviews to verify trustworthiness.

joanna
5.0 out of 5 stars Amazing price.
Reviewed in the United States on 19 October 2016
Platform: PLAYSTATION 3Edition: Portal Owner PackVerified Purchase
My son recently discovered the wonderful world of Skylanders. He started with the Swap Force game, well in places a giant is needed, so I went on a search for a giant that would not break the bank. Found this great game and figure combo, for $4 it is a steal. Since Swap Force game came out after giants, the portal is compatible with it. There was not any need for us to have another portal anyways. The figure Tree Rex is really neat if i had to say so myself. Yeah, I probably shouldn't be into my sons game, but he left it paused the other day and I picked up the controller to see what he was always talking about. Well it is a cute lil game, easy to play, simple to understand, and family friendly. It is so hard to find a game for your kids anymore that doesn't have some sort of inappropriate action, talk something in it. Also it is about helping others in quests without massive blood and violence. My son is 12 and really enjoys this game and finally I can take a deep breath and relax knowing it isn't anything to worry about while he plays it.
Read more
4 people found this helpful
Report abuse

Mena P.
5.0 out of 5 stars Look out Kaos!
Reviewed in the United States on 6 May 2013
Platform: PLAYSTATION 3Edition: Portal Owner PackVerified Purchase
Say what you will about Skylanders. Go ahead, rant about the "death" of Classic Spyro, Activision's moneygrubbing, the "unnecessary" amount of figures. Got that off your chest? Good, now get out of here, because you are looking at a big ol' fan right here.

10,000 years ago, there were gifted Giant Skylanders who helped protect Skylands. Gifted in both the height and strength department, they easily took down any enemies in their path. Then the Arkeyans began their conquest, aided by the Iron Fist of Arkus, and who better to take on a giant army of intelligent robots than a group of Giant Skylanders? While they did defeat the Arkeyans, the Fist sealed away the Giants and banished them to Earth, long forgotten and reduced to nothing more than a myth. That is, until now, as you (the Portal Master) have just unearthed them from their long sleep! And just in time, because everyone's favorite height challenged villain has just set his sights on the Iron Fist of Arkus and is determined to wake the Arkeyan army and take over Skylands with help from the bad luck magnet Glumshanks and a recently awakened Arkeyan Conquertron (voiced by George Takei.)

While many people can complain that yes, you can finish the game with just one Giant and all your Skylanders from the previous game, where is your sense of fun? The collectability, the different attacks and upgrades, not to mention unlockables like Heroic Challenges and elemental zones. "Blah blah, too much money, blah blah." I bet you weren't saying the same thing when YOUR generation's collectables were big. I know I spent countless amounts of money on Pokémon cards, and had dozens upon dozens of repeats, just so I could find a holographic card.

Gameplay is fun as ever, with a lot of new elements added in.

- The legendary treasures, which carried over from SSA, now have a purpose. They are different parts and paint jobs for the hub world, Flynn's Ship, the Dread-Yacht.

- Each Skylander now does Elemental damage in their respective elemental zones, which count toward in game quests, which will be discussed below. Different hats (especially the Wizard hat and Showtime hat) and Heroic Challenge boosts can really aid a Skylander in completing this quest.

- Along with hats found throughout the levels, there are nine quests Skylanders can complete to unlock three special hats; the Bronze, Silver, and Gold top hats, in that order. Completing three quests will unlock a hat, as well as boost the Skylander in rank (also Bronze, Silver, and Gold.) All Skylanders must complete defeat 1000 enemies, eat 50 pieces of food, win ten PvP matches, complete a Heroic Challenge without taking damage, complete an arena battle without taking damage (only Brock's Arena, not the ones in game), and do 7500 elemental damage. Every Skylander then has two element specific quests (that they usually share with other Skylanders of their element) and a Skylander specific quest. For example, Lightning Rod shares the quests "Skylooter" (collecting 500 gold in air) and "From Above" (defeat 25 enemies while falling), but has his own unique quest titled "Current Event" (defeat 10 enemies with one Grand Lightning strike.) These are all rather daunting for a child, but with an adult's help (or, of course, adult Portal Masters) these are no problem.

- The graphics are, of course, better and brighter than the last game!

- A few Heroic Challenges have been spruced up to make them easier to play with a multitude of Skylanders. If memory serves me correctly, in SSA Whirlwind's challenge "Lobs O' Fun" needed to be completed with a character that could reach high places, as there were no bombs and the enemies that had to be taken out were Blastaneers. The enemies are now a Bag O' Boom, a character that throws bombs at you that can be picked up and thrown back at them.

I'm sure I'm forgetting all kinds of wonderful additions, but trust me, you'll want to discover some on your own!

I definitely like this game more than SSA, and I'm sure I'm going to like Swap Force even more. I don't care what your motives are Activision, you can have my money.
Read more
3 people found this helpful
Report abuse

Calyn
5.0 out of 5 stars good for our purposes
Reviewed in the United States on 19 June 2018
Platform: PLAYSTATION 3Edition: Portal Owner PackVerified Purchase
One of my boys got the giants game, for wii, for a birthday. It was the game only (he already had a portal from another game), so he needed the characters. It was cheaper to buy this ps3 portal owners set, which was marked way down, than it was to buy just the characters. We gave the ps3 game to one of my husband's coworkers who wanted it, and the characters worked perfectly.
Read more
One person found this helpful
Report abuse
See all reviews
Get FREE delivery with Amazon Prime
Prime members enjoy FREE Delivery and exclusive access to movies, TV shows, music, Kindle e-books, Twitch Prime, and more.
> Get Started
Back to top
Get to Know Us
Make Money with Us
Let Us Help You
And don't forget:
© 1996-2020, Amazon.com, Inc. or its affiliates