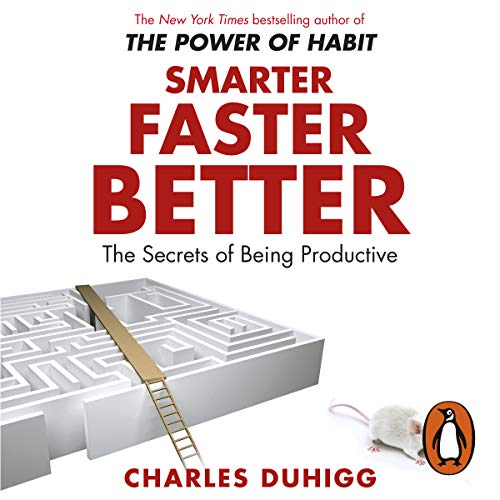 Smarter Faster Better: The Secrets of Being Productive

In the international best seller The Power of Habit, Pulitzer Prize-winning journalist Charles Duhigg explained why we do what we do. In Smarter Faster Better, he applies the same relentless curiosity, rigorous reporting and rich storytelling to explain how we can get better at the things we do. The result is a groundbreaking exploration of the science of productivity.

A group of data scientists at Google embark on a four-year study of how the best teams function and find that how a group interacts is much more important than who is in the group.

A marine corps general, faced with low morale among recruits, reimagines boot camp - and discovers that instilling a 'bias toward action' can turn even the most directionless teenagers into self-motivating achievers.

The filmmakers behind Disney's Frozen are on the brink of catastrophe - until they shake up their team in just the right way, spurring a creative breakthrough that leads to one of the highest-grossing movies of all time.

What do these people have in common? They know that productivity relies on making certain choices. The way we frame our daily decisions; the big ambitions we embrace and the easy goals we ignore; the cultures we establish as leaders to drive innovation: these are the things that separate the merely busy from the genuinely productive.

At the core of Smarter Faster Better are eight key concepts - from motivation and goal setting to focus and decision making - that explain why some people and companies get so much done. Drawing on the latest findings in neuroscience, psychology and behavioural eco­nomics - as well as the experiences of CEOs, educational reformers, four-star generals, airplane pilots and Broadway songwriters - this painstakingly researched book explains that the most productive people, companies and organizations don't merely act differently.

They view the world, and their choices, in profoundly different ways.

Switch between reading the Kindle book & listening to the Audible narration with Whispersync for Voice.
Get the Audible audiobook for the reduced price of $8.49 after you buy the Kindle book.
Learn more about membership
By completing your purchase, you agree to Audible’s Conditions Of Use and Privacy Notice.
Sold and delivered by Audible, an Amazon company

4.5 out of 5 stars
4.5 out of 5
1,477 global ratings
How are ratings calculated?
To calculate the overall star rating and percentage breakdown by star, we don’t use a simple average. Instead, our system considers things like how recent a review is and if the reviewer bought the item on Amazon. It also analyses reviews to verify trustworthiness.

Kindle Customer
5.0 out of 5 stars Excellently Portrayed Real life application
Reviewed in Australia on 20 December 2020
Verified Purchase
I loved this book, and what it stands for. Your own improvement. This provides some wonderful tools based off solid research. I will be applying these in my life tomorrow and every day after. I really appreciated the appendix where he provides his own experience with the tools and how he used them.
Excellent book :)
Read more
Helpful
Report abuse

Rossleighbrisbane
5.0 out of 5 stars Definitely worth reading.
Reviewed in Australia on 22 March 2016
Verified Purchase
An interesting perspective on improving productivity. Easy to read and the case studies are relevant. Well-structured to maintain reader interest.
Read more
One person found this helpful
Helpful
Report abuse

Kindle Customer
5.0 out of 5 stars One of the best books I have ever read
Reviewed in Australia on 23 April 2018
Verified Purchase
Really awesome book. Lots of insight and story telling is spot on. Recommended to anyone who is in the quest to improve their lives
Read more
Helpful
Report abuse

Amazon Customer
5.0 out of 5 stars Take your time to absorb & enjoy the craftsmanship
Reviewed in Australia on 14 November 2017
Verified Purchase
Well worth the read... even more valuable if you take notes... you'll see why if you read to the end!
Read more
Helpful
Report abuse

Noor
4.0 out of 5 stars Interesting insights
Reviewed in Australia on 15 August 2016
Verified Purchase
An amazing and insightful book from the author of Power of habit. Really enjoyed reading.

The one thing that could have made it even better was some how linking all the topics and synthesising them.
Read more
One person found this helpful
Helpful
Report abuse

Emma S
4.0 out of 5 stars Exactly what it says on the packet - you will be smarter, faster and better!
Reviewed in Australia on 3 September 2017
Verified Purchase
I refer to this book over and over. It delves more deeply into some of the concepts introduced in The Power of Habit with even more insights and thinking.
The stories are informative and engaging and really do help with strategies to be smarter, faster and better. I originally purchased the audio, but went back and purchased the Kindle version so I could search and reference the stories when explaining certain concepts to colleagues and clients. I like the personal stories that show how the author applied the concepts to himself and would have loved more.
Read more
Helpful
Report abuse

Gaspard Marsala
2.0 out of 5 stars Anecdotal over Practical
Reviewed in Australia on 10 May 2016
Verified Purchase
I wish the author had spent more time outlining strategies and giving some practically advice - it's in there (sort of) however the books structure is confusing anecdotal stories are abruptly cut and reappear after another anecdote.
Read more
2 people found this helpful
Helpful
Report abuse
See all reviews

CheeseFan
4.0 out of 5 stars Fascinating case studies but a muddled theme
Reviewed in the United Kingdom on 2 April 2017
Verified Purchase
I loved 'The Power of Habit' and was really excited to read this. In many ways I wasn't disappointed: if there's one thing Charles Duhigg can do, it's write in a fascinating, engaging manner. I was gripped by the various anecdotes given throughout the book, and at times it felt like a series of interesting stories more than anything else. The points made around productivity were interesting, but buried; quite often I found myself wondering how this related to the overall theme of the book (if indeed there was one). Part of me wonders whether Charles just put together an anthology of what might otherwise have been a series of journal articles and attempted to unify them under a theme of 'productivity', but really to me this doesn't ring true. This is more a series of ways to live your life a little better, with accompanying case studies. It is a good, engaging and interesting book, but it seems a little muddled and confused at times.
Read more
22 people found this helpful
Report abuse

Amazon customer
5.0 out of 5 stars Great Narratives
Reviewed in the United Kingdom on 29 January 2018
Verified Purchase
Great stories used to illustrate the pertinent points. Tying the lessons to stories actually builds upon one of the lessons in the book: retention is increased by greater engagement. People engage more with stories. Great work.
Read more
3 people found this helpful
Report abuse

Orchid Master
5.0 out of 5 stars Seriously superb book!
Reviewed in the United Kingdom on 25 October 2018
Verified Purchase
This is one of those books that everyone should read, like Black Box Thinking and Don't Shoot the Dog. Easy and enjoyably addictive, I read this very fast and came away having taken quite a few notes.
Read more
One person found this helpful
Report abuse

J L M
4.0 out of 5 stars Very enjoyable and informative
Reviewed in the United Kingdom on 16 May 2020
Verified Purchase
Duhigg draws from many real life examples to inform the reader about what makes people smarter,faster,better and more productive. Reading this book is a good use of your time!
Read more
Report abuse

C D Moore
5.0 out of 5 stars Excellent real world examples that demonstrate the advice
Reviewed in the United Kingdom on 6 May 2016
Verified Purchase
An excellent review of different tools that can help any individual or group to adopt state of the art efficiency, productivity and performance. The use of gripping novel-like stories to explain the derivation of each theory makes this text an easy read. I completed this on kindle in 5 days.
Read more
10 people found this helpful
Report abuse
See all reviews