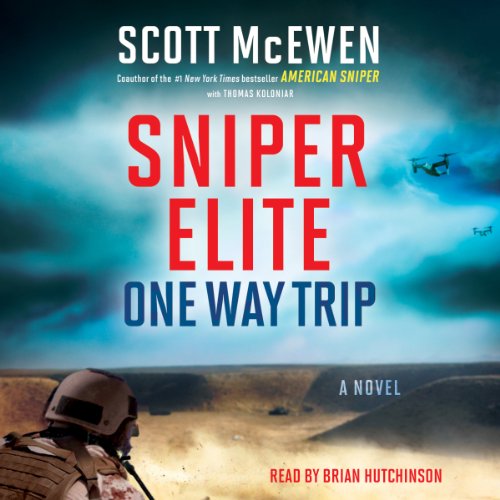 From the coauthor of the number-one New York Times best-selling American Sniper, this "inspired by true events" thriller follows one of America’s most lethal snipers as he leads the rescue of a downed female Special Ops pilot.

The President of the United States can’t decide how to respond to a classified video showing the Taliban’s brutal treatment of their captive - a female helicopter pilot of the Army’s elite Special Operations Aviation Regiment. Afraid that a botched rescue will further destabilize foreign policy and end his presidency, the Commander-in-Chief falters. But when the Special Ops community learns that one of their own is being tortured and will almost certainly be killed, no executive order will stop them from attempting a rescue mission.

In direct defiance of the President’s orders, Navy SEAL sniper Gil Shannon launches an audacious mission with the support of elite soldiers and an enigmatic government figure, to infiltrate the tribal faction holding the captured pilot. A pulse-pounding battle ensues, pitching the entire force of the Taliban against the fearless and heroic American sniper. Packed with blistering action and real-life combat scenes, Sniper Elite: One Way Trip will pin you to the edge of your seat until the very last sentence.

4.6 out of 5 stars
4.6 out of 5
744 global ratings
How are ratings calculated?
To calculate the overall star rating and percentage breakdown by star, we don’t use a simple average. Instead, our system considers things like how recent a review is and if the reviewer bought the item on Amazon. It also analyses reviews to verify trustworthiness.

Brent Towns
5.0 out of 5 stars Guts, determination and a whole lot of fire power!!!
Reviewed in Australia on 21 July 2015
Verified Purchase
For those who like good military fiction with heaps of action this book is for you! Well written, easy to read and it keeps you engaged.
You'll find yourself cheering for the good guys and wishing the bad guys were dead.
Yes, some of the action is over the top, but that's what makes it such a good read. Good soldiers doing everything they can to ensure that everyone makes it home. Of course you have those who think only of themselves (President), but what's one more obstacle in the way.
In the end though it all comes down to guts, determination and a whole lot of fire power.
Totally recommend it. Buy it, you'll enjoy it.
Read more
Helpful
Report abuse

JD (Baen Fan)
4.0 out of 5 stars Unrealistic, but who cares. It's not a bad read.
Reviewed in Australia on 29 December 2016
Not a bad book, but the "heroes" suffer a little from "God Mode".
The story is plausible while still being a little over the top, and while I thought it a little slow to start, once it got going, it was not bad.
The first female SOAR pilot is captured by the Taliban, and the soldiers of DEVGRU and SOAR aren't taking it lying down. They hatch a plot to get her back, which fails, until a lone sniper SEAL finds a way to infiltrate the village where she is being held, and rescue her. After killing over 20 or so enemy, he succeeds and calls for extraction.
Despite the 3 main operators being wounded severely several times over, including a broken fibula and a broken pelvis/hip, they still manage to move at a normal pace, and fight off hundreds of Taliban before they are rescued and taken to hospital.
Read more
Helpful
Report abuse
See all reviews

Granny Di
1.0 out of 5 stars I had to give up on this!
Reviewed in the United Kingdom on 6 April 2019
Verified Purchase
I read a lot of spy; black ops; military; adventure & crime books. I couldn't see why I had started this then stopped at 13% so gave it another go. This time I got to around 30% before the totally overwhelming number of expletives finally defeated me. Don't think me a prude as I am totally okay with four letter words being used - but this was just awful. Once piece of dialogue had 2 four letter words in one short sentence. Sadly I was becoming so distracted by it that I just gave up.

It may have been a really good plot about black ops in Iran and Afghanistan but I will not now be finding out how it ends!

I know other American authors can write without resorting to this approach and hugely enjoy their books. Clearly I won't buy any more from this author.
Read more
One person found this helpful
Report abuse

David Rossifan 46
5.0 out of 5 stars Reacheresque.
Reviewed in the United Kingdom on 28 December 2017
Verified Purchase
Most enjoyable book in ages, way better than most.

Its a worn cliche, but if you like Reacher genre, this is for you.

Alexander Gordon
5.0 out of 5 stars Five Stars
Reviewed in the United Kingdom on 8 June 2018
Verified Purchase
Excellent book, unable to set it down once you start reading it
Read more
One person found this helpful
Report abuse
See all reviews