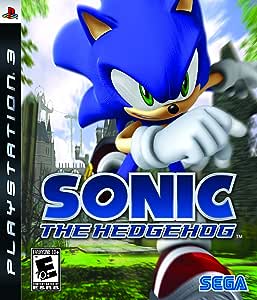 The game is set in Soleanna, the beautiful city of water. In his first adventure set in the human world, Sonic meets a beautiful princess named Elise, whom he quickly befriends, but Princess Elise is abducted by none other than the calculating Dr. Eggman, who is working under dark and sinister motives to destroy this special kingdom of hers.

In order to restore safety and serenity, Sonic must maneuver his way through a series of adventures and challenges where he will encounter and interact with a bevy of allies and enemies,and ultimately go head to head against the menacing doctor to thwart his malicious plans.

Along the way, Sonic encounters a mysterious character named Silver. Blocking him with unique supernatural powers, even the Blue dude with 'tude will find it difficult to out-maneuver the enigmatic Silver! As Sonic speeds through the huge kingdom, the mysteries unravel.

Sonic The Hedgehog melds top-tier animation production values with next generation art physics and game design to create the most intense high velocity Sonic adventure yet! Featuring interactive 3D environments a large cast of new and returning characters and a blistering sense of speed get ready for the reinvention of Sonic The Hedgehog!

ghamdisj
5.0 out of 5 stars thanks
Reviewed in the United Kingdom on 12 February 2020
Platform: PlayStation 3Verified Purchase
than
Read more
Helpful
Sending feedback...
Thank you for your feedback.
Sorry, we failed to record your vote. Please try again
Report abuse

Mr. D. A. Burke
2.0 out of 5 stars Frustrating game
Reviewed in the United Kingdom on 25 February 2020
Platform: PlayStation 3Verified Purchase
Too difficult to be a fun game. My fault, I ignored a decades’ worth of bad reviews
Read more
Helpful
Sending feedback...
Thank you for your feedback.
Sorry, we failed to record your vote. Please try again
Report abuse

Shimi
3.0 out of 5 stars Feels rushed, but worth playing once.
Reviewed in Canada on 22 November 2016
Platform: PlayStation 3Verified Purchase
This is a game that had the potential to be good. The story is interesting and the characters are as we expect them to be. Omega's voice bugs me, though. I'm used to his voice in Sonic Heroes and Shadow the Hedgehog, not this strange office robot voice! (Not tough-sounding at all!) Anyways, the graphics are nice, I guess, but the resolution is 720p instead of my preferred 1080p. Still, the cinematic cutscenes are beautifully rendered. As for gameplay, there are many glitches. Silver's story and Shadow's story were both good and fun, (with the exception of having to play as Rouge, since it's nearly impossible to let go of the wall you're climbing at-will), Sonic's story was downright frustrating! He is the buggiest by far in my opinion! He moves fast enough to mess up the frame-rate and his homing attacks feel so... slow. (Especially compared to the speed of say, Sonic Heroes.) Grind rails are difficult to land without homing attacks and the camera can be rather annoying at times, often being too close to sonic and the inabilty to zoom out). If you stop sideways on a wall, you'll fall, but if you stop up-side-down in a loop, you'll stay there. Dash Panels can be evil, causing you to run directly into obstacles or even off edges. And don't even get me started on the high-speed! Most of Sonic's action stages are split into two parts: the actual level, followed by a high-speed stage. During high-speed, you basically have to just keep running really fast and avoid obstacles. Easy right? Wrong. It's really difficult to maneuver on the ground and you can't change directions mid-air, forcing you to time your jumps or die. And die you will, over and over again. Occasionally, you will glitch through things, but it's much more common to get hit by an object that you clearly dodged. (Stupid invisible tree!)
The game also incorporates the idea of shops. You have to buy upgrades with rings. To obtain rings, you can complete town missions, which range from rediculous to annoying. But I wouldn't mind town missions so much if I didn't have to wait and wait and wait for the darn loading screens! I've never seen a game with so many loading screens! You talk to a (generic) npc and accept the mission. Loading screen. Single line of dialogue. Loading screen. Complete/fail mission. Loading screen. Single line of dialogue. Loading screen. Then you're placed back in town to repeat the process if you failed, or carry on with the game. It's extremely annoying!
There are good things about this game, though. It plays like a Sonic Adventure game and has an amazing soundtrack. Shadow can use vehicles, which is-for the most part-a plus. Silver's story offers a completely different gameplay style, using telekinesis to catch missiles and throw them and other obstacles back at opponents. He is actually my favorite character to play as in this game! He takes some getting used to, since he's not fast and the game fails to offer a tutorial. Once you master the controls, his story becomes quite enjoyable.
Moving on, the ability to adjust the audio and other options would be nice, but most (if not all) other Sonic games lack this feature as well. You can unlock cut scenes and audio, but there are no alternate costumes or artwork to reward you with. There is a 2-player co-op mode that can be a lot of fun, but you can't choose the stage and it doesn't contribute to the actual stay. You can also play 2-player battle mode, which is a race to the goal. Also, in the main game, you're partner's AI is really stupid, so tails, blaze, whoever, can often be heard jumping repeatedly in an attempt to reach you on a rooftop or falling to their death as they try to follow you. Overall, the game feels rushed. I later learned that it is in fact underdeveloped, which leaves me a bit disappointed in SEGA. So many of the bugs could have been fixed if SEGA had taken the time to perfect this game.
This game is worth playing if you're a fan of Sonic. You'll need patience, but it can be fun. Although it's one of those games that you'll play once or twice before letting it collect a thick layer of dust

Elizabeth Simpson
5.0 out of 5 stars Zoom with Sonic for lots of fun.
Reviewed in Canada on 18 March 2019
Platform: PlayStation 3Verified Purchase
Bought for my daughter for Christmas. She loves the graphics and ease of play. Price was reasonable compared to stores and in stock so I didn't need to look for it far.
Read more
Helpful
Sending feedback...
Thank you for your feedback.
Sorry, we failed to record your vote. Please try again
Report abuse

TurretCorruption
5.0 out of 5 stars Absolutely Abysmal
Reviewed in Canada on 30 July 2019
Platform: PlayStation 3Verified Purchase
I mean its sonic 06 so of course its absolutely terrible. I bought this knowing it was bad though and I wasn't disapointed. Can't wait to play this travesty all the way through. 10/10
Read more
Helpful
Sending feedback...
Thank you for your feedback.
Sorry, we failed to record your vote. Please try again
Report abuse

Skeeve
5.0 out of 5 stars Fun if you hate yourself.
Reviewed in Canada on 20 November 2016
Platform: PlayStation 3Verified Purchase
It's pretty much the worst game ever made. Playing it is a challenge in itself.
Read more
4 people found this helpful
Helpful
Sending feedback...
Thank you for your feedback.
Sorry, we failed to record your vote. Please try again
Report abuse

Riddell
3.0 out of 5 stars Came In Good Condition, Wish The Game Did Too
Reviewed in Canada on 4 March 2018
Platform: PlayStation 3Verified Purchase
It arrived in great condition, too bad the ps3 version of this game is the worst version of this game, which is already not the best game in the world.
Read more
One person found this helpful
Helpful
Sending feedback...
Thank you for your feedback.
Sorry, we failed to record your vote. Please try again
Report abuse
Load more international reviews

Jay D
4.0 out of 5 stars Better than Sonic Boom
Reviewed in Canada on 14 August 2015
Platform: PlayStation 3Verified Purchase
i wanted to prove to my brothers how glitchy this game is and i won the bet, better than sonic boom thought
Read more
One person found this helpful
Helpful
Sending feedback...
Thank you for your feedback.
Sorry, we failed to record your vote. Please try again
Report abuse

Blair McInnis
4.0 out of 5 stars Four Stars
Reviewed in Canada on 9 February 2018
Platform: PlayStation 3Verified Purchase
Was perfect, took a little longer to get here then anticipated, but the game is great.
Read more
Helpful
Sending feedback...
Thank you for your feedback.
Sorry, we failed to record your vote. Please try again
Report abuse