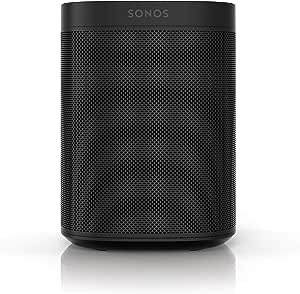 Superior sound: Enjoy surprisingly rich, room-filling sound from a smart speaker with voice control. Sonos One seamlessly syncs app and touch commands, enabling you to manage music with a single tap of the app or swipe of the speaker. Sonos One is backed by a pair of Class-D amplifiers and custom-built drivers, meticulously tuned to the speaker's unique acoustic architecture. Fits almost anywhere: its small size also makes it perfect for bookshelves, counters and snug spaces. Trueplay speaker tuning: Trueplay fine-tunes Sonos One to ensure you get the very best sound in any room, no matter where you put it.

C. Wheeler
1.0 out of 5 stars Easy to set up, descent sound, flaky Google Assistant, no Music Unlimited support
Reviewed in Australia on 24 August 2019
Colour: WhiteVerified Purchase
Edited March 2020
After 6 months of use, I am completely disappointed with the Sonos One. I bought the Sonos One when I was undecided between Google Home and Amazon Echo, and thought the Sonos One would give me the option between the two. Sadly, the Google Home Assistant lost it's connection or configuration and required resetting on multiple occasions. A recent web search confirms that this is still a problem. Also, in order to listen to music through the Sonos One, you must have the Sonos One app on one of your mobile devices, and have 'apps' for each music provider installed in Sonos. Despite what it said in the sales literature when I bought my Sonos One, it does not directly support Amazon Music Unlimited. It is only possible to listen to Amazon Music Unlimited if you have Alexa enabled as the assistant.

As far as Alexa, the microphone on the Sonos One seems more sensitive than the Echo that I have in the next room, and it regularly tries to respond from the next room to requests directed to the Echo in the room where I am. Furthermore, it doesn't seem to be aware of as many skills or as smart as the Amazon Echo I have. For instance, the Echo Show will quite happily open an iHeartRadio artist station given the command 'Ask iHeartRadio to play Vance Joy artist station'. The Sonos One *always* responds by opening the last station I had open. I've given up and generally leave the microphone turned off. I do almost all of my listening in the kitchen, where the Echo can actually deal with my requests.

If I were to do it over, I would probably buy one of Echos with really good speakers for my lounge room.

Edited November 2019
After using this speaker for several months, I'm less impressed than initially. It was easy to set up with both Alexa and Google Assistant. You can only have one set up to respond to requests, but I have been able to set it up with Google Assistant on the Sonos and also play things on it from my Echo. However, a few weeks after configuring it with Google Assistant, Google Assistant just stopped working, as if it never detected the end of a request (it still beeped when I said 'Hey Google' but then never did anything in response to what I said next. Reconfiguring the system got it working again for a few days, but then I gave up and installed Alexa.

The sound is pretty good but it doesn't really fill the room like a half decent amplifier and set of speakers does. The volume for the voice assistant is much louder than the media volume.

Using the Sonos speaker requires configuring the Sonos app with your music accounts, regardless of whether your Google or Amazon accounts already know about them.

NICK
TOP 1000 REVIEWER
5.0 out of 5 stars 3rd one to the collection.
Reviewed in Australia on 21 December 2019
Colour: BlackVerified Purchase
With sound being subjective, this is what I feel would be a fair review. I have listened to many speakers over the year and would say I listen to multiple types of music. From the first Play 1 that I purchased to adding in another Play 1 to now owning the One, they are a well-made speaker that at low volumes packs a kick in the low end. The higher you go, the less punch the bass has. I mainly run Spotify through it and can say the App and the ability to control it through Spotify connect mays it very easy to navigate. The addition of the voice control makes it easier, however, i have found sometimes it can be glitchy compared to my actual Echo. Other than that, i would 100% recommend this as a stereo pair to fill in your office. In saying this, I have this one in the kitchen that is open plan living and it fills that room very well. That room is approx 6m X 8 m and i can say that the sound from the speaker is good. Please note, if you are planning on the speaker to blow your hair back, then pair with with the sub or look at Play 5. That is going to be the next purchase!!...Otherwise, It a a great speaker with resonable punch.
Read more
Helpful
Comment Report abuse

Ben
4.0 out of 5 stars Great speaker. Incomplete voice control disappointing.
Reviewed in Australia on 4 September 2019
Colour: BlackVerified Purchase
Don't get me wrong. This is a very fine sounding speaker and easy to set up. That's why it gets four and not three. It gets a four, but not five, because I'd bought this primarily as a voice-controllable bedroom speaker. The Sonos alarm is fine but it's not voice controllable. I specifically didn't want to have to use my phone to manipulate alarms, in an attempt to banish it from the bedroom. Google assistant alarms aren't available either though. What's particularly egregious about this is that you can set a GA alarm with your voice and the speaker blithely reports that the alarm has been set, repeating the time and everything. Only it hasn't set anything. GA timers work as expected (go figure.) It's clearly a bug but Sonos support declined, implacably, to report it as such, preferring to call it a "feature request".

Not enough of a deal breaker to warrant sending it back (it does sound lovely). Still, arbitrarily incomplete voice control meant I couldn't use it for the purpose I bought it for. I hope to give this a five rating when the bug is fixed.
Read more
2 people found this helpful
Helpful
Comment Report abuse

Kay
3.0 out of 5 stars Average sound, cant integrate with other alexa devices and lacks bass.
Reviewed in Australia on 3 January 2020
Colour: WhiteVerified Purchase
I was really excited for this smart speaker. Sonos have the best reputation and with Alexa built in, it seemed perfect. Unfortunately it sounded very poor in my living room. The bass wasn't sufficient and i dont listen to heavy bass music. Alexa worked well but you should know that Sonos devices dont work well with Amazon alexa devices (i know, seems odd) - you can't create multi room audio with this and other devices unless theyre all sonos. Good price but over rated IMO.
Read more
One person found this helpful
Helpful
Comment Report abuse

JYA
TOP 500 REVIEWER
4.0 out of 5 stars Microphone not as sensitive as version 1
Reviewed in Australia on 29 April 2019
Colour: WhiteVerified Purchase
Only 4 stars as the microphone is much less sensitive than the other models I have (3 Sonos One version 1). You have to be within a couple of metres from this Sonos One for Alexa to work well.
I don't know if it's this particular unit or version 2 in general.
Read more
Helpful
Comment Report abuse

Luke S
1.0 out of 5 stars How long until obsolete....
Reviewed in Australia on 23 January 2020
Colour: WhiteVerified Purchase
Since making this purchase, I want to express my disappointment with SONOS' latest decision to no longer support the Play: 5. I have been a customer for over 8 years and have several thousand dollars of SONOS equipment in my household. I most recently purchased a series of SONOS One. I have also led many friends and family members to invest in their ecosystem. This decision feels like a big slap in the face and unless it is reversed, I will no longer purchase any more equipment. Further I will no longer recommend the ecosystem to friends and family.
Read more
Helpful
Comment Report abuse

Monica K.
5.0 out of 5 stars Sonos One (Gen 2) - Great quality
Reviewed in Australia on 4 December 2019
Colour: BlackVerified Purchase
I have a number of Sonos products and the Ones are a good quality product - compact, versatile and sound great. Very easy to add to an existing Sonos system and work flawlessly.
The product description here on Amazon is a little confusing. This is definitely the Sonos One (Gen 2), model number ONEG2AU1BLK.
Read more
Helpful
Comment Report abuse
See all reviews from Australia
Pages with related products. See and discover other items: Best Rated in Hi-Fi Speakers, Best Rated in Hi-Fi Speaker Systems
Get FREE delivery with Amazon Prime
Prime members enjoy FREE Delivery and exclusive access to movies, TV shows, music, Kindle e-books, Twitch Prime, and more.
> Get Started
Back to top
Get to Know Us
Make Money with Us
Let Us Help You
And don't forget:
© 1996-2020, Amazon.com, Inc. or its affiliates