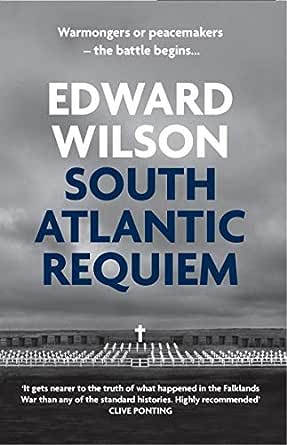 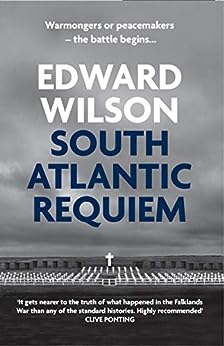 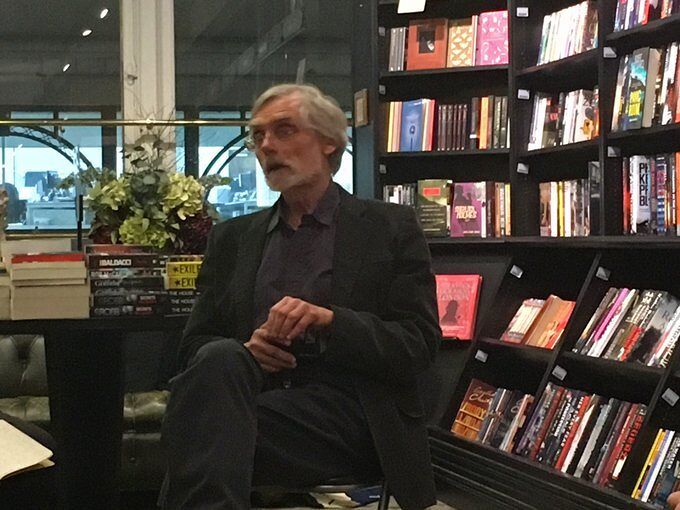 'High calibre writing throughout, and an array of extraordinary characters. Not to be missed.' Shots

'In The Whitehall Mandarin, Edward Wilson adeptly weaves his fiction together with historically accurate detail to present a broad-sweeping canvas of espionage as thrilling as it is believable.' claire-thinking

'Ted Wilson, writing out of deepest Suffolk, is a magnificent addition to the English tradition of writing about this dark side of politics and government. He deserves a big readership as fact and fiction blend into great storytelling.' Tribune

'The Whitehall Mandarin is a dream for book lovers - a smart, sophisticated spy novel.' texasbooklover

'This cynically complex plot is laid over perfectly described settings, from London to Moscow to Vietnam. Wilson's characters and their consciences come alive to lend the book its power. ... A deftly plotted homage to the mavens of Cold War spy thrillers.' Kirkus Reviews

'With surprise appearances by many an actual person or politician, this is a twisting tale of what might actually have happened that will tickle the imagination long after you've set the book down.' Lovereading

As in earlier Wilson novels, Catesby is a spook who never takes the easy option, and the elaborate minuets he dances around the equally elaborate terpsichore of his opponents provides great satisfaction for the reader. We attempt to second-guess both Catesby and his crafty creator, and are soundly outfoxed at every turn.' Barry Forshaw, Independent --This text refers to the hardcover edition.

Born in Baltimore and now based in Suffolk, Edward Wilson is a highly acclaimed writer whose novels focus on espionage and the Cold War. Winning praise from the TLS as well as the Mail on Sunday, Wilson is a master of ambiguity who creates likable villains and detestable heroes. He uses his background as a scholar, soldier, and cosmopolitan expatriate to create authentic settings and verifiable plots.

4.2 out of 5 stars
4.2 out of 5
133 global ratings
How are ratings calculated?
To calculate the overall star rating and percentage breakdown by star, we don’t use a simple average. Instead, our system considers things like how recent a review is and if the reviewer bought the item on Amazon. It also analyses reviews to verify trustworthiness.

Lizzie
4.0 out of 5 stars South Alantic Requiem - fiction/non fiction
Reviewed in Australia on 4 March 2021
Verified Purchase
The Falklands War had a big impact on my family life, so I was interested to read this book. It was full of information that has not always been readily available but I felt it would have had more credibility if it had been written as non-fiction. I did enjoy reading it but the ficticious characters seemed to fade into the background for much of the book and imerge at the end. Otherwise a good read.
Read more
Helpful
Report abuse
See all reviews

C. E. Utley
2.0 out of 5 stars Wilson's Left Wing Spy is Becoming Tiresome
Reviewed in the United Kingdom on 8 August 2018
Verified Purchase
There is no doubt that Wilson can write page turners. I don't think it matters that he is no more than a competent writer. It's the story that is important with him. That said, I do rather dislike the explicit and rather disgusting sex scenes he throws in every now and again (presumably at the insistence of his publisher). But one can always skip those and get back to the story.

Wilson's hero, William Catesby, has been around for a while. This is his sixth appearance. He is a senior member of the Secret Intelligence Service, sometimes known as MI6. And, interestingly we are meant to think, he is also a Socialist. This novel sees him as Director of South America for the SIS in the period leading up to and during the Falklands conflict. He recruits a beautiful young Englishwoman as a sort of occasional spy in Argentina in 1980. She sends some interesting reports to London which, taken together, suggest that the Junta may be contemplating an invasion of the Falklands. Catesby dutifully passes on this intelligence to the Joint Intelligence Committee, but no one pays any attention because all are terrified of a sort of wicked witch called Margaret Thatcher who is the British Prime Minister and who is known to care not a jot for the Falklands.

Now, of course, it is true that Mrs Thatcher was middle class, the daughter of a shopkeeper. So, to people like Mr Wilson, it must seem that she was common. Whether that is a very bad thing, as Mr Wilson and his characters believe, is open to doubt.

What of the other allegations? I have a slight advantage over Mr Wilson: I Knew her, and my parents knew her extremely well. I can assure Mr Wilson that it is simply not true that she was rude to everyone. She was both courteous and exceptionally considerate.

She was most definitely not an alcoholic. Yes, she liked a glass of whisky and I suppose some prudish teetotalers might say that made her an alcoholic. But they would be wrong. She drank a bit more than she used to once she stopped being Prime Minister, but even then she never overdid it.

Wilson's characters' final, and most damning, allegation against Mrs Thatcher is that she was a woman. She should never have been Prime Minister at a time of armed conflict because women had not served in the armed forces during the war. All I can say is that Mr Wilson should read a serious, not a conspiracy theory, book about the Falklands conflict. I advise him to start with Charles Moore's first volume of his biography of Lady Thatcher. Those who admired her and those who despised her were all interviewed and their views faithfully reported. In relation to the Falklands it is fair to say that even those who were opposed to her policies agreed that her conduct of the war was faultless. And that was chiefly because, as a woman, she knew she did not have the experience to do a Churchill and tell the Chiefs of Staff how to run the war.

Some may think I am overdoing the Thatcher element in the novel. But I can assure you I am not. The whole book is one long rant against the evil Thatcher. And it is packed with falsehoods (the Prime Minister knew nothing of the Peru peace proposals when she agreed to the Navy's request that the Belgrano should be sunk even though she was not in the exclusion zone). Of course, as Mr Wilson is at pains to point out, the book is fiction. He is not claiming that all the sins he alleges against Mrs Thatcher were true. But the trouble is that there are lots of readers out there who will assume it is all true.

Mr Wilson can do much better than this.

Kindle Customer
5.0 out of 5 stars Outstanding book in an outstanding series.
Reviewed in the United Kingdom on 17 February 2019
Verified Purchase
The Catesby series of books have, for me, been an absolute enthralling reading experience. A journey through the murky world of post war espionage, with Catesby, the MI6 "Quixote", eternally jousting at the reactionary windmills of class and right wing ideology.
As the series progressed Catesby left wing leanings became more of an influence on the books and this latest one, based around the Argentine invasion of the Falklands, brings Catesby's socialism into conflict with the neo conservatism of Thatcher.
The political viewpoint of the book is starkly left leaning and anyone of a rightish inclination will probably be upset by the portrayal of Margaret Thatcher, but this in no way diminishes the book or its message. The betrayal of young men and women in uniform, wrapped up in a jingoistic blanket, will always serve someone's political interest and this book is in no doubt that the Falklands War was more about the political crises of the two countries involved, then about the sovereignty of the Islands themselves.
I suppose this is also farewell and bon voyage to Catesby, although I do hope there are still a tale or two to be revealed.
Read more
3 people found this helpful
Report abuse

Mark
4.0 out of 5 stars Interesting fact based novel, but it has an angle to the way they're presented.
Reviewed in the United Kingdom on 7 February 2020
Verified Purchase
Mostly a 'behind the scenes' political/espionage novel on the Falklands War.

Firstly though, I'll say I don't know how much is true (press releases are quoted throughout) and how much is speculative fiction, but it was an enjoyable read for me.

However, if you're one who believes that the Falklands War was a glorious, necessary and righteous victory for Britain and Thatcher will remain forever a heroic figure because of it, you'll probably not feel the same, I suspect.

I lived through the period, a friend's father was there in the Paras and we worried about him daily (luckily he came back unscathed and I'm sure he felt he'd been doing the right thing), so it all seemed a bit less gung-ho heroism to us and the tone of the book is fairly clear in its view that the war started, at least partly, because of ignorance and neglect on the British Government's part and continued to its end for domestic political ends (on both sides), at the unnecessary cost of many lives, British and Argentine.

I enjoyed the book, but it played to my already held beliefs - If yours are different, it will play against them and I suspect you'd enjoy it less.
Read more
2 people found this helpful
Report abuse

david hammersley
5.0 out of 5 stars Excellent 'faction' concerning the Falklands War.
Reviewed in the United Kingdom on 19 March 2018
Verified Purchase
The ideas explored by Edward Wilson in all of the Catesby novels are intriguing and this one is an excellent addition to the series. I particularly like the way the characterisations show facets of people we think we know and at the end of the story I am left with the question "I wonder how much of that was true?" A very enjoyable read that I strongly recommend.
Read more
11 people found this helpful
Report abuse

Greenrig
4.0 out of 5 stars Inside story of Falklands War
Reviewed in the United Kingdom on 31 May 2018
Verified Purchase
The protagonist Catesby, seems to have the ability to be present at EVERY key discussion about the War, even meeting Thatcher, and taking part in key assassinations. It's not totally believable because of this,but it's very interested to read a "Spy" story with such a different background .. no Soviets, no Berlin... Some of the pacing seems off with an unresolved story regarding a British spy in Argentina, who is introduced, at great length, but never acts, and just disappears from the plot. Well recommended as a rapid and entertaining read.
Read more
4 people found this helpful
Report abuse
See all reviews
Back to top
Get to Know Us
Make Money with Us
Let Us Help You
And don't forget:
© 1996-2021, Amazon.com, Inc. or its affiliates