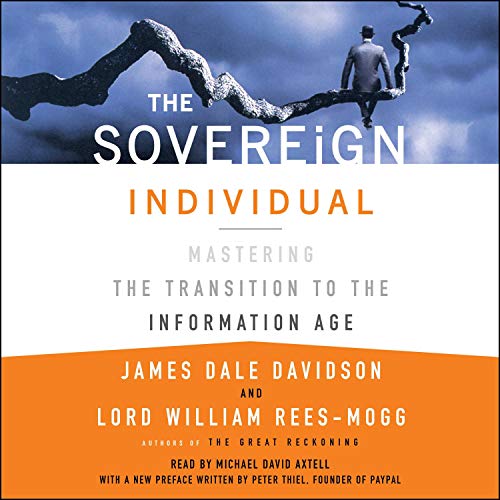 The Sovereign Individual: Mastering the Transition to the Information Age

Two renowned investment advisors and authors of the best seller The Great Reckoning bring to light both currents of disaster and the potential for prosperity and renewal in the face of radical changes in human history as we move into the next century. The Sovereign Individual details strategies necessary for adapting financially to the next phase of Western civilization.

Few observers of the late-20th century have their fingers so presciently on the pulse of the global political and economic realignment ushering in the new millennium as do James Dale Davidson and Lord William Rees-Mogg. Their bold prediction of disaster on Wall Street in Blood in the Streets was borne out by Black Tuesday. In their ensuing best sellar, The Great Reckoning, published just weeks before the coup attempt against Gorbachev, they analyzed the pending collapse of the Soviet Union and foretold the civil war in Yugoslavia and other events that have proved to be among the most searing developments of the past few years.

In The Sovereign Individual, Davidson and Rees-Mogg explore the greatest economic and political transition in centuries - the shift from an industrial to an information-based society. This transition, which they have termed "the fourth stage of human society", will liberate individuals as never before, irrevocably altering the power of government. This outstanding book will replace false hopes and fictions with new understanding and clarified values.

Read more
©1999 James Dale Davidson and Lord William Rees-Mogg (P)2019 Simon & Schuster
Previous page
Next page
Learn more about membership
By completing your purchase, you agree to Audible’s Conditions Of Use and Privacy Notice.
Sold and delivered by Audible, an Amazon company
Share

4.5 out of 5 stars
4.5 out of 5
545 global ratings
How are ratings calculated?
To calculate the overall star rating and percentage breakdown by star, we don’t use a simple average. Instead, our system considers things like how recent a review is and if the reviewer bought the item on Amazon. It also analyses reviews to verify trustworthiness.

A. Schaffer
5.0 out of 5 stars Unpleasant style, but ultimately changes the way you think
Reviewed in Australia on 13 May 2021
This is a difficult book to review, style vs. content...

Firstly, what is it? A book that breaks up human history into massive 500-1000 year long eras, and concludes that we are currently leaving the industrial era and entering the technology era. In this age, the world will change fundamentally and irreversibly, in ways that are uncomfortable to many, but liberating to others.

And what makes this book so amazing? That they get it broadly bang on, forecasting remote working, video conferencing, crypto currencies, handheld multipurpose computers, social media with personalised news feeds, battles between tech companies and governments, routing profits through low tax jurisdictions... it's all in there. Ok so they don't name "Zoom" and "iPhones", but close enough!

And when you get your head around their explanation of why this is all occurring, you gain a fundamental insight into everything that's going on in the world today (except pandemics, they missed that!). And then you realise this was all written in the 1990s, wow, just wow.

But the downsides... the book is long and repetitive, and whilst many sources are quoted, there's little hard data, you get the impression the sources are just right-leaning historians who agree with the authors.

But the most displeasing aspect is that - whilst the authors may well be correct about the long-term failure of institutions such as the nation state, social welfare, free healthcare, and other things that make life quite pleasant - they don't simply point out its inevitability, they seem to revel in it, almost cheering on the demise of the poor and needy. It leaves a bitter taste.

Nevertheless, if you can get through all that, it will completely change how you see the world, and for that gets 5 stars.
Read more
4 people found this helpful
Helpful
Report abuse
See all reviews

J
1.0 out of 5 stars If you voted brexit...this book is for you.
Reviewed in the United Kingdom on 26 September 2018
Verified Purchase
An extreme far right libertarian dystopian view of the future that his son JRM appears to be willing along with his WTO no deal Brexit plans. Yes...the information age is upon us and the impact of goverments being unprepared has led to western liberal democracy being challenged. This has resulted in a rise of nationalism across the globe. If you voted Brexit because you believe Britain can be a great sovereign state outside the EU...then read this book and you will find that WRM is predicting, with relish at the thought of monetary gains from no taxation, the demise of the nation state, including goverment services like the welfare state and nhs. Of course, we are just tax slaves and how much better off we will be when we are liberated from taxation and no longer have to pay for the services provided to the less well off in society...except you...yes you who voted brexit...will be one of the less well off rather than a sovereign individual.
Read more
260 people found this helpful
Report abuse

Alex
5.0 out of 5 stars Technological and political prophecy, based on thorough historical analysis
Reviewed in the United Kingdom on 17 March 2019
Verified Purchase
Although written before the turn of the Millennium, this book predicted many of the social, political, and technological changes that have come to pass in the first two decades of the twenty-first century.

Some other reviewers here have seen fit to condemn this book for what they perceive to be its authors' unpalatable "extreme far right libertarian" ideology or "selfish misanthropic" attitude. From my reading of the book, these accusations are unfair. The authors do have a detectable libertarian bent, but this does not detract from the rigour of their historical analysis or the clarity of the reasoning by which they arrive at their conclusions and predictions. Throughout the book their concern is reality, and what shape it will take in the future that is now our present.

By any objective measurement, the authors were immensely successful in their efforts, identifying and anticipating the many of the fundamental technological and social forces that have shaped the last twenty years of world history. Among their predictions (written, let us remember, in 1997) are:

Political:
- "A decline in the status and power of traditional elites, as well as a decline in the respect accorded the symbols and beliefs that justify the nation-state"
- "An intense, even violent nationalistic reaction centered among those who lose status, income, and power when what they consider to be "ordinary life" is disrupted by political devolution and new market arrangements."
- "...suspicion of and opposition to globalization, free trade, "foreign" ownership and penetration of local economies"
- "...popular hatred of the information elite, rich people, the well-educated, and complaints about capital flight and disappearing jobs"

Economic:
- "Lifetime employment will disappear as "jobs" increasingly become tasks or "piece work" rather than positions within an organization."
- "Many members of learned professions will be replaced by interactive information-retrieval systems."
- "The new society, and therefore the new culture, will be defined at one end by what machines can do better than people, by automation that will do away with increasing numbers of low-skill tasks, and at the other by the power that information technology gives to people who actually have the talent to take advantage of it."
- "When the state finds itself unable to meet its committed expenditures by raising tax revenues, it will resort to other, more desperate measures. Among them is printing money."

Technological:
- "...the advent of the Information Age implies another revolution in the character of money. As cybercommerce begins, it will lead inevitably to the cybermoney....This new digital form of money is destined to play a pivotal role in cybercommerce. It will consist of encrypted sequences of multihundred-digit prime numbers. Unique, anonymous, and verifiable, this money will accommodate the largest transactions. It will also be divisible into the tiniest fraction of value. It will be tradable at a keystroke in a multitrillion-dollar wholesale market without borders."

Media:
- "Within the next few decades, for example, narrow-casting will replace broadcasting as the method by which individuals obtain their news. This has significant implications. It amounts to a change in the imaginations of millions from first person plural to singular. As individuals themselves begin to serve as their own news editors, selecting what topics and news stories are of interest, it is far less likely that they well choose to indoctrinate themselves in the urgencies of sacrifice to the nation-state. Indeed, their attitudes are more likely to be informed by the global culture to which they relate as consumers of entertainment that by the highly personal "news" narrow-casts to which they may subscribe."

The authors did not come to these startling insights at random. They are derived from a detailed investigation into "megapolitical" historical trends, the most fundamental and important factors that have shaped the successive forms of human society and civilisation so far.

Anyone who seeks a deeper understanding of the technological, social, and political upheavals of the last two decades would be well advised to read this book. To quote from its introduction, "As technology revolutionizes the tools we use, it also antiquates our laws, reshapes our morals, and alters our perceptions. This book explains how."
Read more
105 people found this helpful
Report abuse

Marvel
5.0 out of 5 stars Libertarianism isn't extremism
Reviewed in the United Kingdom on 1 March 2021
Verified Purchase
It's quite bonkers, and yet a consistent pattern, that collectivists love to level the accusation of ‘extremism’ at libertarians.

A cursory understanding of history shows the opposite to be the case: only collectivist feeling and misguided collectivist projects have the ability to cause genocide and suffering at a scale appropriate to label 'extremist'.

The book is profound and insightful. Save yourself; collectivist delusions will only see you trampled under the boot of some statist delusion or another.
Read more
9 people found this helpful
Report abuse

MrH
5.0 out of 5 stars Can't believe it was written in the late 90's
Reviewed in the United Kingdom on 25 March 2021
Verified Purchase
Enjoyed the history part with the transition between eras. Best part is how much the authors saw of how the internet / chips would change everything. Will certainly challenge some people's thinking on the institutions / government setups... for me this is an interesting alternative perspective worth reading whatever your worldview.
Read more
6 people found this helpful
Report abuse

Grantham
5.0 out of 5 stars A must read if you want to understand Johnson and Rees-Mogg’s Tory Party
Reviewed in the United Kingdom on 25 August 2021
Verified Purchase
Is the writing on the wall for the ‘nation state’? So prophetic is so many ways.
If you want to understand current UK Conservative Party thinking this book will open your mind - a lot!!
Read more
3 people found this helpful
Report abuse
See all reviews
Back to top
Get to Know Us
Make Money with Us
Let Us Help You
And don't forget:
© 1996-2022, Amazon.com, Inc. or its affiliates