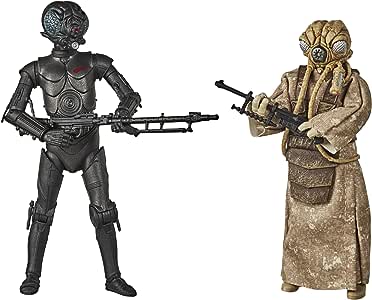 Originally a protocol droid, logic glitches allowed 4-LOM to become a bounty hunter. Zuckuss was a mercenary that heeded the call to locate the Millennium Falcon and its fugitive crew! Kids and collectors alike can imagine the biggest battles and missions in the Star Wars saga with figures from Star Wars The Black Series! With exquisite features and decoration, this series embodies the quality and realism that Star Wars devotees love. Star Wars The Black Series includes figures, vehicles, and roleplay items from the 40 plus year legacy of the Star Wars Galaxy, including comics, movies, and animated series. (Additional products each sold separately. Subject to availability.) The 6" (15 cm) Carbonised Collection Darth Vader figure is carefully detailed to look like the character from Star Wars: The Empire Strikes Back, featuring premium detail, multiple points of articulation, and a metallic finish.

4.5 out of 5 stars
4.5 out of 5
542 global ratings
How are ratings calculated?
To calculate the overall star rating and percentage breakdown by star, we don’t use a simple average. Instead, our system considers things like how recent a review is and if the reviewer bought the item on Amazon. It also analyses reviews to verify trustworthiness.

Robbie S
5.0 out of 5 stars Fantastic Collector's item sent in MAILER Allowing for damaged box.
Reviewed in Australia on 8 July 2020
Verified Purchase
Product looks awesome.
AMAZON, sent this expensive item in a filthy mailer, allowing for my box to be damaged. AND IT WAS.

How difficut is it to post these in boxes, so they're not ruined?
Collector's note;
BE AWARE WHEN BUYING THIS ITEM.. ESPECIALLY IF OVERSEAS.. REQUEST A BOX MAILER IN 'Gift options'

Alonso
2.0 out of 5 stars Extremely poor condition
Reviewed in Australia on 27 July 2020
Verified Purchase
The figure themselves are great, but the packaging was ruined. Normally I wouldn't mind since I mostly collect loose anyway, but these are collectors' items and the packaging is a big part of the appeal. Extremely disappointed.
Read more

Glenn
3.0 out of 5 stars Poor Packaging
Reviewed in Australia on 20 July 2020
Verified Purchase
Great product but sent in a mailer. Box was damaged.
Items like this should be default sent in a shipper carton. It’s not hard.
Read more
Helpful
Comment Report abuse

Aiden pstten
5.0 out of 5 stars Excellent
Reviewed in Australia on 6 August 2020
Verified Purchase
The figures are great quality and there was little to no dame to the box
Read more
Helpful
Comment Report abuse

Robert Stow
1.0 out of 5 stars Box ripped and damaged
Reviewed in the United Kingdom on 25 June 2020
Verified Purchase
The box it arrived it was torn. No more in stock currently to be able to replace it.
Read more
6 people found this helpful
Report abuse

Paul S
2.0 out of 5 stars Nice figures but appalling presentation/packaging
Reviewed in the United Kingdom on 28 August 2020
Verified Purchase
A real issue lately: packaging (it's the 'Han Solo in carbonite' situation all over again!). On many products, this wouldn't be an issue at all, nor any part of a review; but it's obviously considerably important for collector items and one of the main selling points of this set in particular is specifically the packaging and presentation. It's literally the basis of this release: to mimic the presentation of a specific original, 'old-school' release from the 80's as an anniversary exclusive.
These are 2 individual carded figures (on individual blister cards like the other 40th Anniversary 'Empire Strikes Back' figures) in a presentation box. The box doesn't split/open to reveal the contents or have any slipcase: it's just a printed box with no window.
I can't work out if it's an Amazon issue or a Hasbro issue or (likely) both, but lately the Star Wars Black Series figures from Amazon are arriving in a terrible condition, bashed, dented, bent backing cards with veining...
I bought two of these sets- they arrived together in one package and that package was sturdy and undamaged (so no mishandling during transit and delivery)- but inside, one box was fine bar for the corners, but the second was fully bashed down and dented in and broken in one corner. I've seen sales outlets for other carded Black Series figures illustrating that cards have veining and damage direct from Hasbro as a box is opened- and that stands true of these sets I purchased, too, because even inside the sealed presentation boxes that hold 2 carded figures each, the backing cards of those figures is damaged, too. The cards are bent and veined in areas where the external box isn't, and the protective plastic bubble/windows are scratched. So damaged cards were packed into a presentation box and sealed with tape by Hasbro before the presentation box was even damaged.
I'm at the stage where I don't think I'd buy another Hasbro Black Series item with any intention of keeping the packaging (so I'd only buy 'openers'/no extras to keep boxed, and no exclusives or presentation pack items). I probably won't buy any Black Series from Amazon anymore at all, to be honest, despite the free shipping on them being one of the primary reasons for my Prime subscription, because the state of them on arrival's just too disappointing now. To have to keep assuming items will be damaged on arrival at this price is just completely unsatisfactory- they're worse than used/second-hand. If its an Amazon issue: they need to address it, if it's purely a Hasbro issue: Amazon need to make it clear its unacceptable.
Really disappointed.
The figures themselves:
Basically re-releases of existing figures, but presented as they were in the 80's (so they're intentionally misnamed on the packaging - 4-LOM as Zuckuss and vice-versa- and with original 80's toys' colour schemes). The sculpts for both of these were/are great: detailed, intricate, accurate, if unbalanced to stand. Articulation isn't extraordinary, but that's not an issue for me, especially with these characters (and droids, especially protocol droids, rarely articulate much). Not a fan of soft goods personally, but that's an individual preference and I know others are entirely inclined the other way. This colour application on 4-LOM (labelled Zuckuss) is much poorer than the modern, accurate application, but it's intended to be to mimic the original figure. Certainly cheapens his appearance, though. Zuckuss (labelled 4-LOM) on the other hand, I think I prefer in this deco, weirdly. The lighter scheme highlights the details of the sculpt better, the soft goods jacket has a nicer effect and appearance here and this version actually makes for a really excellent 'alt'.
Difficult to rate this set highly because the primary purpose of it- repackaging existing figures so that the focus and selling point is the packaging and presentation- falls apart when the packaging arrives in a really sub-standard, damaged style. If these items were available elsewhere, or even still available at Amazon to replace, I'd return them- but I'm hijacked into accepting poor goods or not to have them at all. Undamaged, they'd be what I expected and paid for- which is a nice novelty package of well sculpted figures designed to bring some nostalgic joy- but what arrived feels like a disappointing rip-off and a substantial loss of money with a difficult choice of what to do about it. Quite a shame. Nice figures, though one much better than the other, packaging unfit for purpose.
Read more
Report abuse

Matt
5.0 out of 5 stars Black Series Collection Must Have
Reviewed in the United Kingdom on 29 June 2020
Verified Purchase
This beat all expectations - the name error is correct so don't panic if buying, this was deliberately done.
This item arrived immaculate and the quality and detail in both the packaging and item is amazing.
Read more
2 people found this helpful
Report abuse

Powerdroidpoodoo1985
5.0 out of 5 stars 5 star figures
Reviewed in the United Kingdom on 17 October 2020
Verified Purchase
First up , these are great value for money , paid £30 for 2 incredible sculpts whereas if you bought 2 individual black series exclusives (such as gaming greats) it would cost you £48 plus postage/shipping , as a proud owner of a mint in mint box 4-LOM and zuckuss vintage collection 3"75 set , i instantly went for these as i am a huge fan of nostalgic errors (the name switch) , as i already own the regular releases of these 2 , i will be proudly displaying them carded , i already know what to expect with the sculpts and neither of them are nothing short of amazing , vintage colours , incorrect names , collector's sleeve to hold them , what's not to like? A must have for all sixers out there and nostalgic collectors , bounty hunters sell , as i write this review this set has sold out for the 3rd time , hopefully this encourages hasbro to make more bounty hunters , background aliens or cantina characters! Just imagine exclusive cantina aliens in their screen inaccurate 70's coloured outfits! 5 stars hands down
Read more
Report abuse

Darren
1.0 out of 5 stars Arrived trashed.
Reviewed in the United Kingdom on 6 July 2020
Verified Purchase
Amazon delivery service at it best......not.
Read more

3 people found this helpful
Report abuse
See all reviews
Get FREE delivery with Amazon Prime
Prime members enjoy FREE Delivery and exclusive access to movies, TV shows, music, Kindle e-books, Twitch Prime, and more.
> Get Started
Back to top
Get to Know Us
Make Money with Us
Let Us Help You
And don't forget:
© 1996-2020, Amazon.com, Inc. or its affiliates