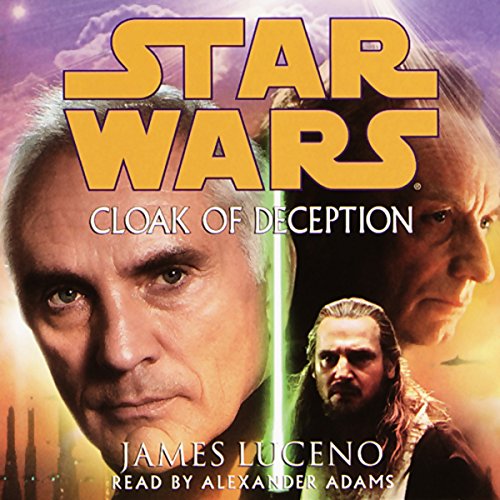 4.5 out of 5 stars
4.5 out of 5
285 global ratings
How are ratings calculated?
To calculate the overall star rating and percentage breakdown by star, we don’t use a simple average. Instead, our system considers things like how recent a review is and if the reviewer bought the item on Amazon. It also analyses reviews to verify trustworthiness.

Mr. Richard J. S. Blake
5.0 out of 5 stars Star Wars Cloak Of Deception
Reviewed in the United Kingdom on 3 February 2020
Verified Purchase
Okay so there is a four point of few of what doesn't seem like a prequel at first but as it goes along, and builds up and up, the more you get interested in it, so the Trade Federation from (Star Wars Episode 1 The Phantom Menace) is the set up for the first four chapters. It seems like a intro instead of four chapters, but you have what is called the Revenue and then terrorists from the Nebula Front tries to steal from them, this being three main characters, Captain Chol, Boiny and Havac but little do they know that seven Jedi will be on the chase to them, this includes Jedi Masters like Yaddle, Ki-Adi-Mundi, Sae Tiin, Adi Gallia. But mainly Jedi Knight Qui-Gon-Jinn whose behaviour before the Jedi council makes Yoda nearly go too far to confront him in a near argument, but Obi-Wan-Kenobi as usual is the wiser one and stays at Qui-Gon-Jinn's side, if he has something to ask he thinks it over before asking to learn off his wisdom and if anything else is asked to think about the Force, Qui-Gon-Jinn would put it in Master Yoda's wise words. So the bond between Master and Padawan is one thing, the second look at this is that deception is everywhere when a assassination attempt is put against Supreme Chancellor Volrum's life, the politics side has a lot to do with both Supreme Chancellor Volrum and Chancellor Palapatine. A lot of different politicians go behind the scenes and try to out do one another. The third look at it is the Trade Federation having there Battle Droids made and the tanks created, an army that gets Nute Gunray excited, the seven Jedi end up on a planet called Dorvalla where they are hostages but are able to eventually fight there way out but Qui-Gon-Jinn has a personal feeling for Captain Chol. Which the fourth look is on the terrorists but a different party, you get to see Lieutenant Tarkin, as the main part of this story line is to see if the Trade Federation is to be in the trade routes, since they have sworn to let go of their warfare but instead, they get to trade on what they seek on different planets, that's where Captain Chol comes in to steal Aurdoium Ingots. But on Eriadu, a main Senate summit is to be held for what happens to the Trade Federation, but is the Supreme Chancellor the main target? and will the Jedi be able to defend him while Qui-Gon-Jinn has other plans, other than that you get to read that Padme Amadalla goes into her first reign of power at the age of fourteen. And for those many people who have watched Star Wars Episode 1 The Phantom Menace, Darth Sidious tells the plans for the Trade Federation to use their new army by blocking the way to Naboo!

What amazed me was the way this prequel includes a personal objective for Qui-Gon-Jinn and that he ignores the approval of the Jedi council, but also the bond between him and Obi-Wan-Kenobi, the story line flowed well and there was new characters, even among the Jedi, to read about and two new Planets to explore in this amazing novel. However there was only two cons.

The Trade Federation didn't come into the story line as much as I thought it would, one ship only was written at the start of the four chapters, then the main Trade Federation Neimoidians, Nute Gunray and Lot Dodd appear at the end of chapter four, halfway into the book of there army being created and then at the summit.

Worse Darth Sidious only came into two parts of the book, one that Viceroy Nute Gunray was thinking about and then when he was asking them to make a blockade to Naboo, Darth Sidious could have came in now and again like in Star Wars The Approaching Storm, the Prequel to Star Wars Episode 2 Attack Of The Clones, in my review of that book I mentioned that Soergg The Hutt was not in that book for most the time.
Read more
One person found this helpful
Report abuse

S.
5.0 out of 5 stars Another Brilliant Luceno-Written Star Wars Novel
Reviewed in the United Kingdom on 30 July 2020
Verified Purchase
As ever, a James Luceno-written Star Wars novel hits the spot.

A political thriller preceding Episode 1, Cloak of Deception has countless highlights. The characterisations of Qui-Gon, Obi-Wan, Palpatine & Valorum in particular are all superbly done, while the dynamic throughout the book between all characters is brilliantly written.

Easter Eggs include the appearances of Imperial-era and Post-ROTJ characters, which alongside other nods and tie-ins highlight Luceno's gift for knotting together the various eras within the Star Wars Expanded Universe prior to the takeover.

Arguably THE key feature of the novel, however, is how Palpatine manipulates everything. And I mean that in the very literal sense: Everything! From the political mechanisms on Coruscant, to manipulating inter-galactic affairs, to playing all sides against each other, and moving the chess pieces around at all the right moments to ensure victory. Too often it is claimed that The Phantom Menace served no real purpose in terms of the Prequel Trilogy but this book rejects that notion and fills in so much detail, even where you wouldn't expect. Additionally, it doesn't just enhance The Phantom Menace, it enhances the trilogy overall. People too easily forget that the Prequel Trilogy isn't simply about Anakin's descent into the Darkness, but also about Palpatine's rise to power, and this book makes that all the more clearer.

All in all, a brilliant book that's a must have for fans of the Star Wars novels, particularly the Old EU.
Read more
One person found this helpful
Report abuse

Daniel
4.0 out of 5 stars Political thriller set in the Star Wars universe
Reviewed in the United Kingdom on 31 May 2020
Verified Purchase
I love the world-building within the Star Wars prequel trilogy and especially the political manoeuvrings that Palpatine orchestrated to go from Senator, to Supreme Chancellor, to Emperor of the Galactic Empire.

This book, alongside the superb Darth Plaguis, really complements The Phantom Menace and adds a huge amount of back story to Palpatine's character, as well as the wider political landscape.

I really liked Qui Gon Jinn in this novel too, as his maverick, rebellious side really shines through in the story.

Although the plot does seem a little thin at times, the story moves along quickly enough so you don't feel like you're hanging around too much.

If you're a fan of the prequels, especially Episode I, then I highly recommend reading this book.
Read more
Report abuse

Kindle Customer
5.0 out of 5 stars Taught thriller
Reviewed in the United Kingdom on 7 October 2017
Verified Purchase
For anyone who raised an eyebrow about how taxes to free trade lanes caused the events of episode 1 or wondered how the trade federation came under the influence of Sidious, this is the book for you. To put it bluntly, this book as far better with more thought given to it than it needed to be.
Read more
Report abuse

Ben Glazier
5.0 out of 5 stars A book worthy of the Star Wars title.
Reviewed in the United Kingdom on 19 August 2015
Verified Purchase
A very interesting and fun book to read. Luceno delves into the more political side of the star wars universe and shows us a true representation of how the Republic Senate functioned. We get to see all the "behind the scenes" actions of Senator Palpatine and how they affect the prominent members within the Senate. On the other hand we are also shown more of the Padawan to Master relationship of Obi-Wan and Qui-Gon as well as more prominent roles for some of the seldom mentioned Jedi on the Jedi council at that time. All in all a very competent prequel to the events of the phantom menace and the reasons for those events.
Read more
One person found this helpful
Report abuse
See all reviews
Back to top
Get to Know Us
Make Money with Us
Let Us Help You
And don't forget:
© 1996-2021, Amazon.com, Inc. or its affiliates