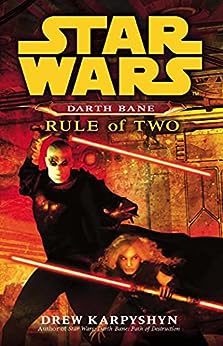 Save on selected Bestselling Big Idea books.
View our curated selection of books. Click to explore.

Drew Karpyshyn is the New York Times bestselling author of Star Wars: Darth Bane: Path of Destruction and Mass Effect: Revelation, as well as several other fantasy and science fiction novels. He is also an award-winning writer/designer for the computer game company BioWare, where he was lead writer on Mass Effect and the blockbuster Star Wars: Knights of the Old Republic video game. He lives in Canada's hinterlands with his wife, Jen, and their cat. --This text refers to the mass_market edition.

"The Sith are gone - all except Darth Bane, creator of the "Rule of Two," which states that the new Sith Order will consist of only two- a Master and an apprentice. All Bane has to do now is train that Apprentice..." --This text refers to an alternate kindle_edition edition.
Read more

4.8 out of 5 stars
4.8 out of 5
1,280 global ratings
How are ratings calculated?
To calculate the overall star rating and percentage breakdown by star, we don’t use a simple average. Instead, our system considers things like how recent a review is and if the reviewer bought the item on Amazon. It also analyses reviews to verify trustworthiness.

Amazon Customer
5.0 out of 5 stars Wish it was longer
Reviewed in Australia on 10 April 2016
Verified Purchase
A great read although it could have contained more if one must sacrifice quantity for quality then this book is a nice gourmet bite of the dark side.
Read more
Helpful
Report abuse

Erin & Adam
5.0 out of 5 stars Five Stars
Reviewed in Australia on 1 December 2016
Verified Purchase
Great Book. This is how to Star Wars
Read more
Helpful
Report abuse
See all reviews

S P Mead
5.0 out of 5 stars a great second instalment
Reviewed in the United Kingdom on 21 June 2016
Verified Purchase
This is the second novel in a trilogy, and it immediately follows on from the events of the first instalment "Path of Destruction". Here, author Drew Karpyshyn continues the story of Darth Bane - an immensely powerful Dark Lord of the Sith - who has accessed ancient and forbidden knowledge. With this knowledge, Bane has ended the war that had engulfed the Republic - by destroying his former brotherhood and killing all other Sith lords. This was done so that Bane could instigate the Rule of Two - that the Sith should only ever comprise of two: a master and an apprentice. Together, their task is to use secrecy, subterfuge and other clandestine methods so as to infiltrate the Republic and - over time - conquer it. With this in mind, Darth Bane seeks to train an apprentice ...

Karpyshyn offers an intriguing and highly engaging story - one that draws on the Star Wars mythos, but also contributes to it. This is a very fascinating adventure - focussing on the villain-as-protagonist - set some 1,000 years before the events of "A New Hope". And what this novels does is present a story about what that galaxy - far, far away - is like. We get to read about the Jedi Order at the peak of its power and influence. And we discover the first tentative steps taken by the Sith that eventually culminate in Palpatine's victory and the rise of the Empire. If this backstory interests you, I thoroughly recommend this book.

In this novel, Darth Bane takes an apprentice - a young woman called Zannah - and trains her in the dark side of the Force. Meanwhile, he seeks to advance his own strengths and abilities - by locating the remaining hidden remnants of ancient Sith knowledge. To do this, he journeys around the galaxy, in search of long abandoned temples. It is during this quest that he falls victim to trap - and is attacked by orbalisks, parasitic creatures that attach themselves to his body, growing and multiplying, feeding of his energy. Unable to remove these creatures, Bane learns to control their growth - so as to prevent them covering him completely. And, strangely, they now serve as invulnerable body armour - even able to withstand a light-sabre.

As the years pass, Zannah grows into a beautiful woman - and masters the ways of Sith sorcery. As their plans are set in motion, a few Jedi start to suspect that the Sith have returned. And so, revealing themselves for the first time, Bane and Zannah engage the Jedi ... resulting in an intense confrontation. And the outcome of the battle leads directly into the concluding instalment of the trilogy: "Dynasty of Evil".

"Rule of Two" is an excellent Star Wars novel - but I do suggest reading this as part of the trilogy.
Read more
3 people found this helpful
Report abuse

Chris W
4.0 out of 5 stars A good sequel
Reviewed in the United Kingdom on 10 May 2018
Verified Purchase
I really enjoyed Path Of Destruction and the story of how Bane rose to power from nothing. While I did enjoy Rule Of Two I didn't feel quite as satisfies by the end - that said it's definitely worth a read.

Possible story spoilers from here on in.

The story focuses more on Bane's new apprentice Zannah, discovered at the end of Path Of Destruction. The focus on her learning is intriguing and exciting as her own story arcs unfold. There are a few set-piece moments spaced methodically throughout which were enjoyable and gratuitous.

The story sometimes switches between the perspectives of the characters within, primary and supporting, which I initially found jarring having just read Path Of Destruction, but as a technique used throughout the book I thought was well implemented.

I did feel that Bane didn't get enough page-time, and as such he often felt like a supporting character to me at times. I would have liked to have seen more of the awesome power that was hyped so much in the previous book; given he took down the Brotherhood of Darkness previously and had his powers further enhanced here, I feel as if he should be almost godlike by now.

All said this is a good book and, while not necessary, I recommend reading Path Of Destruction first. The author does however give a good account of past events for those unfamiliar with the previous title. I'm looking forward to finishing off the trilogy!
Read more
Report abuse

Rackman
5.0 out of 5 stars This would make a fantastic film.
Reviewed in the United Kingdom on 30 April 2015
Verified Purchase
This is a relentlessly dark, brooding adventure with some superb characters. The pace is excellent, and the interesting character progression, tracking the curbing of Bane's power as the star of his young apprentice Zannah rises, is engrossing stuff.

This particular episode would make a fantastic set of films aimed at adult audiences - if you've seen the film "Dredd" it would make a good starting point for the kind of dark, violent territory the story covers.
Read more
One person found this helpful
Report abuse

K. G. A. Alavi
4.0 out of 5 stars From Rain to Zannah to Darth Zannah
Reviewed in the United Kingdom on 2 June 2012
Verified Purchase
This is sequel to  Path of Destruction: A Novel of the Old Republic (Star Wars: Darth Bane)  it continues immediately after the first book and then jumps 10 years. The book follows Bane's apprentice from an innocent 10 year old to claim her own Darth title. Zannah can be even more cold blooded then her master. This book is enjoyable and it is a credit to the author that he finished this book in 6 months. This book is the second step in the 1000 year plan that became  Star Wars: Episode III: Revenge of the Sith (Star Wars (Random House Hardcover)) . In the first book Bane showed some humanity when he felt remorse and even crippling guilt over his first force murders, but Zannah does not seem to have a conscience at all. As a reader I was drawn into Zannah's point of view. During the book Bane makes himself nie-indestructible which presents an interesting problem to his apprentice who is destined to kill her master.
Read more
Report abuse

markus
5.0 out of 5 stars Awesome for all star war fans
Reviewed in the United Kingdom on 13 March 2017
Verified Purchase
Awesome for all star war fans, lots of action and you'll find out more about the dark side, i have read all three books and they were amazing. The first book takes a while to get into but then its action, dark side all the way. I loved it !!!! Books 2 and 3 i finished quickly as i found it gripping, bane's journey sets the standards for all upcoming sith and dark side force users. Brilliant you will not regret !!!
Read more
Report abuse
See all reviews
Back to top
Get to Know Us
Make Money with Us
Let Us Help You
And don't forget:
© 1996-2021, Amazon.com, Inc. or its affiliates