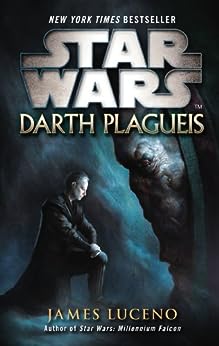 A tale of two Sith: At long last, the story of the mysterious Sith Lord, Darth

Plagueis, and his apprentice, Darth Sidious, is revealed!

Darth Plagueis: one of the most brilliant Sith Lords who ever lived. Possessing power is all he desires. Losing it is the only thing he fears. As an apprentice, he embraces the ruthless ways of the Sith. And when the time is right, he destroys his Master - but vows never to suffer the same fate. For like no other disciple of the dark side, Darth Plagueis learns to command the ultimate power...over life and death.

Darth Sidious: Plagueis's chosen apprentice. Under the guidance of his Master, he secretly studies the ways of the Sith, while publicly rising to power in the galactic government, first as Senator, then as Chancellor, and eventually as Emperor.

Darth Plagueis and Darth Sidious, Master and acolyte, target the galaxy for domination - and the Jedi Order for annihilation. But can they defy the merciless Sith tradition? Or will the desire of one to rule supreme, and the dream of another to live forever, sow the seeds of their destruction?

James Luceno is the New York Times bestselling author of the Star Wars novels Darth Plagueis, Millennium Falcon, Dark Lord: The Rise of Darth Vader, Cloak of Deception, and Labyrinth of Evil, as well as the New Jedi Order novels Agents of Chaos I: Hero’s Trial and Agents of Chaos II: Jedi Eclipse, The Unifying Force, and the eBook Darth Maul: Saboteur. He lives in Annapolis, Maryland, with his wife and youngest child. --This text refers to an out of print or unavailable edition of this title.
Read more

4.7 out of 5 stars
4.7 out of 5
4,101 global ratings
How are ratings calculated?
To calculate the overall star rating and percentage breakdown by star, we don’t use a simple average. Instead, our system considers things like how recent a review is and if the reviewer bought the item on Amazon. It also analyses reviews to verify trustworthiness.

The book covers events leading up to and partway into the events of the prequel trilogy in the span of about 60-70 years. The book is a great starting point as it goes into how Palpatine became a sith, though the story mainly focuses on the life of Darth Plagueis, his master and mentor into the dark side.

The book features many characters and locations that you may be familiar with from the films that are mentioned in passing or relevant to events as they happen throughout the book.

My main complaint about this book is how easily the spine can crack and be on the verge of pages dropping out. So handle it very careful and not open it beyond 90 degrees if you don't want to ruin the overall physical quality of the book.

Daniel Schievink
5.0 out of 5 stars Great seller, great book
Reviewed in Australia on 16 February 2020
Verified Purchase
Excellent book, if you are deciding whether ot not to buy it, i recommend you do. Deffinetly worth the read.
Also highly recommend the book depository
Read more
Helpful
Report abuse

Anon56789
5.0 out of 5 stars Value for money
Reviewed in Australia on 29 June 2020
Verified Purchase
Cheap mass market paperback but well worth it for the price. Great book for the fans.
Read more
Helpful
Report abuse

Kindle Customer
5.0 out of 5 stars amazing
Reviewed in Australia on 20 January 2018
Verified Purchase
enjoyed the book a lot. depicted events in a great way and gave great imagery to the reader in all aspects
Read more
Helpful
Report abuse

Christopher Burton
4.0 out of 5 stars Quite enjoyable
Reviewed in Australia on 30 March 2017
Verified Purchase
Some misused words and typos but for the most part well written. Nicely paced and solid story arc and character development.
Read more
Helpful
Report abuse

Ben Powell
1.0 out of 5 stars I didn't mean to buy this
Reviewed in Australia on 6 July 2019
Verified Purchase
I wanted an audiobook this wasn't one
Read more
Helpful
Report abuse
See all reviews

S P Mead
4.0 out of 5 stars a well-written novel on the Sith
Reviewed in the United Kingdom on 10 January 2017
Verified Purchase
This is a very good Star Wars novel, set before and during the events of the prequel trilogy. This book focuses on two Sith lords - namely Darth Plagueis and his apprentice Darth Sidious (aka Palpatine). Initially, the story explores the rise of Plagueis as a Sith Lord; and, later, it deals with the subsequent rise of his apprentice, who seeks to acquire unlimited power for himself. Throughout, these Dark Lords of the Sith put into motion their plan to conquer the Republic and enact the demise of the Jedi Order. As part of this, we discover lots of backstory concerning Palpatine - which, in the films, is often only hinted at. This book informs us of the insidious plots that underlie the events seen in both 'The Phantom Menace' and 'Attack of the Clones'.

This is a well-written and entertaining novel, and one that adds a lot to the saga that is the prequel Star Wars universe. The Plagueis character is briefly mentioned in the films, and is here fleshed out in detail. He's a powerful Sith lord intent on mastering life and death. If this character interests you then I highly recommend this book. But, just to say, as this story focuses on the Sith so there's little or no Jedi action, and not much by way of space battles ... instead it's about plots developed over decades and their fruition as political plans. This might not interest all Star Wars fans.
Read more
25 people found this helpful
Report abuse

Go Away
5.0 out of 5 stars Have I been rooting for the wrong guys all along?
Reviewed in the United Kingdom on 30 September 2018
Verified Purchase
It’s a really well written book. Not so much about lightsabre-y Jedi fightin’ action but more about the politics (on Naboo and in the Senate) not to mention the dirty dealings of trade federation and banking clan as they exploit outer rim worlds via their corrupt governments. If you’re interested in Darths Plagueis’ and Sidious’ back stories then you this is very much the story for you. It also provides a bunch of historical material on the Sith more generally which brings much needed depth to the ancient enemy of the Jedi. About half way through the novel I even found myself rooting for Darths Plague & Sid. I shared in the frustration about a system weighed down by a corrupt and self-serving political class turning its gears. I felt for the outer rim worlds forgotten by the core systems who dominated the senate. In short James Luceno’s excellently researched and written book has turned me into a separatist - I’m with Dooku - let’s Make the Republic Great Again.
Read more
13 people found this helpful
Report abuse

Kindle Customer
5.0 out of 5 stars Perfect episode 1 set-up and Snoke hint?
Reviewed in the United Kingdom on 17 January 2018
Verified Purchase
This book helps make episodes 1-3 feel more interesting and entertaining. It gives you such an interesting insight into how events were set up leading in to episode 1. Plagueis (Snoke?) truly is a fascinating character and helps shape the fall of the republic through his influence and support of Sidious. Learn about the Sith Grand Plan but also wonder at Plagueis' obsession with immortality and whether he actually obtained it (so he could come back as Snoke later on with the weight of his hidden financial arsenal to form the first order....just saying).

A great read, you will love it!
Read more
6 people found this helpful
Report abuse

Rob Kemp
5.0 out of 5 stars A brilliant prequel to the events of ‘Phantom Menace’.
Reviewed in the United Kingdom on 9 January 2019
Verified Purchase
I do love James’ Star Wars books, he really does his homework and creates an incredible plot with good action, character and dialogue.
It’s great to see previously known characters expanded and explored and more of an investigation into the politics that wrought such a heavy toll on the Republic. Reminds one of present day petty squabbles!
I thoroughly recommend this book for Star Wars fans who want to delve deeper in the 'gaps before/after' films.
I’m now in the mood to re-read the Phantom Menace now!
Read more
5 people found this helpful
Report abuse
See all reviews
Back to top
Get to Know Us
Make Money with Us
Let Us Help You
And don't forget:
© 1996-2021, Amazon.com, Inc. or its affiliates