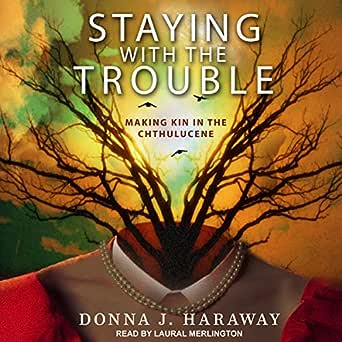 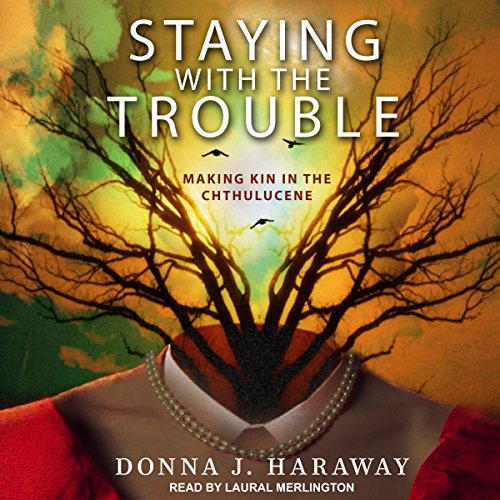 Staying with the Trouble: Making Kin in the Chthulucene

4.7 out of 5 stars
4.7 out of 5
146 global ratings
How are ratings calculated?
To calculate the overall star rating and percentage breakdown by star, we don’t use a simple average. Instead, our system considers things like how recent a review is and if the reviewer bought the item on Amazon. It also analyses reviews to verify trustworthiness.

steven lovatt
3.0 out of 5 stars It's (just) worth staying with the prose.
Reviewed in the United Kingdom on 11 November 2020
Verified Purchase
It's an open-hearted and intellectually honest book, and it introduces ways of thinking and acting that are helping me to digest and deal with my great fear and sorrow at the state of the Earth. I learned a lot about how different cultures understand/understood their place in the world very differently to how we do, and how we could maybe learn from them. It's admirably dismissive of quick fixes and wishful thinking. I find the writing style almost unreadably annoying, and swore aloud a great deal. Mine might be an extreme case, but I suspect that almost everyone other than Haraway's fellow writers in alt-ethnography will weary of how self-regarding it is, and how very much it enjoys gesturing towards 'unruliness' – 'This reiterated list whorls and loops throuhout the coming pages, in words and in visual pictures, braiding me and my readers into beings and patterns at stake'; 'It matters which worlds world worlds'. But if you can cope with all this horrible archness, there's good food for thought every few pages.
Read more
7 people found this helpful
Report abuse

Tamas Zsolt Szigecsan
4.0 out of 5 stars The celebration of contamination.
Reviewed in the United Kingdom on 5 April 2018
Verified Purchase
According to Haraway we are in the area of Dithering (dermedtség). This is the state of the culminating consequences of the epidemic of the industrial revolution of England swept over the globe in the past centuries.

The Antropocen and Capitalocen are two overlapping periods of this epidemic starting with the invention of steam engine and followed by colonisation and globalisation. This human exceptionalist, self-making, and planet-destroying politics worked out by the beautiful words and weapons of industrial heroes led to the devastating multi-species trouble of today. The environmental destruction, mass extinction, climate change, social disintegration, widening wars, human population increase, vast migration of human and other-than-human refugees without refuges are problems characterised by this difficult heritage.

Surviving on a seriously damaged planet needs new narratives humans together with other critters can find their places within. Haraway offers a biotechnology based story with affordable contraceptives and bodily modifications in order to stay with the other-than-humans together in the hot pile of compost of the Earth. This tries to be an unheroist answer without absolute truth, without final solution or the hope for salvation. What tentacular thinking, unheroic story telling, nonantropocentric fabulation, string figure description can bring together from a material-semionic netbag can allow is to tell the horisontal survival story of the community of compost, the tale of New Gauley where unexpected companion species flourishing, living and dying well together probably the first time in the history of the Earth. This is in the age of Chthulucene what is already with us buried but glowing under the ruins of collapsing Capitalocene. Grieving, thinking and composing together with other earth-bound critters in the hot pile of compost and using bodily modifications like gene technology allow humans to become symbionts and hybrids together with other unexpected non human companions, animals, plants, and machines alike.

This is the celebration of contamination, the feast of trespassing boundaries. This is the forgetting and forgiving once for all every trespass against natural limits in the name of multispecies ecojustice. The recognition that human life is never certain and never pure does open peoples (humus) of the Chthulucene toward Gaia and help them to get rid of the fantasy of the detached knowledge-power of the Hero. The peoples of humus with the inevitable help of technology turn their knowledge-power to their unheroic integration into the compost even if this enterprise can lead to the irrevocable total loss of human nature (butterfly girl and other new genetically modified critters) and a total gain of multispecies (species without species?) culture.

1. What extent the story could reach its original aim to be an unheroic fabulation if it could at all? Is it possible at all to step outside the hero/antihero fabulation? This story seems to me an antihero tale where the answers of the antihero to deprivation, exploitation and desolation although different from the western monastic answers of poverty, obedience, and solitude, do not give up the trial of strength (Latour) of self sacrifice in order to help multispecies (species without species?) survival and flourish.
2. What extent can be this story a blueprint of multispecies (species without species?) survival if its outcome largely depends on the trial of strength (Latour) of continuous artificial, energy dependent, technological interventions of human or AI technoculture (gene and bodily modifications etc).
3. What extent can be called a culture Human if it lost its natural human characteristics or what extent can be called an other-than-human culture non human if it shows definite human features. Blurring the borders creates in-between critters (species without species). This may not abolish current basic identity problems come from the dimensions of the ownership, the membership and the mastery of the body (human or not) but makes simple problems extremely complicated with the cost of the loss of species as species (biodiversity) forever.
4. What extent an overly complicated horisontal survival story offered to many can save the simple hierarchy of the few?
Read more
13 people found this helpful
Report abuse

I love Harraway's use of language, and the images she creates, her descriptive methods of discernment and the way she makes links, and explains worlds, that implicates you, has put this at the top of my favourite artist books.

If you are an ecologist an environmentalist, artist or poet, designer, fan of sci-fi, pigeons, the moon, or live on planet Earth, this could be essential reading, which could shift your point of view.
Read more
4 people found this helpful
Report abuse

Genie Poretzky-Lee
5.0 out of 5 stars This is an unusual reflective read
Reviewed in the United Kingdom on 6 July 2019
Verified Purchase
found it a challenging original overview on many aspect of our present global situation
Read more
One person found this helpful
Report abuse

AvidSketcher
4.0 out of 5 stars Strange and amazing
Reviewed in the United Kingdom on 12 February 2021
Verified Purchase
Still making my way through Harraway's wierd and wonderful world.
Read more
One person found this helpful
Report abuse
See all reviews
Back to top
Get to Know Us
Make Money with Us
Let Us Help You
And don't forget:
© 1996-2021, Amazon.com, Inc. or its affiliates