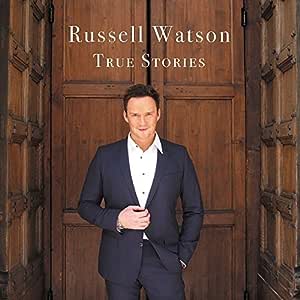 Four time Brit Classical Awards winner Russell Watson has announced details of his new album, the first fruits of his new deal with FOD Records. Entitled True Stories, Watson, the only artist ever to be No.1 in the Classical Charts in the US and the UK at the same time, is set to release the album on FOD records on November 4th 2016. The album has been produced by legendary producer Bob Rose (Roy Orbison, George Harrison) and was recorded at Ennio Morricone s Forum Music Village Studios in Rome with the 75 piece Orchestra Italiana Del Cinema (the orchestra Morricone uses for all of his movie scores) plus members of Blondie, Portishead and Oasis/Noel Gallagher s High Flying Birds. True Stories features songs including Sometimes Love Just Ain t Enough, If I Loved You from Carousel, Who Can I Turn To (from The Roar of the Greasepaint), The Smell Of The Crowd an Anthony Newley/Leslie Bircusse penned tune that Tony Bennett recorded in 1964), the Mario Lanza number With A Song In My Heart, the superbly reimagined Richard Marx tune Now and Forever and Frank Sinatra s In The Wee Small Hours Of The Morning, and an incredible version of the Lord s Prayer. Russell Watson comments: I m delighted to be working with the legendary producer Bob Rose. The group of musicians he has put together is incredible. This is the most excited I ve felt about a project since I released the first disc in 2000. Bob Rose comments: Russell Watson is one of the great artists on the world stage and the upcoming album will, I believe, further confirm his position as an artist of incomparable quality. Russell Watson has performed for some of the world s most notable figures including The Queen (on numerous occasions), The Duke of Edinburgh (he is an ambassador for the Dukes Fellowship Charity), Prince Charles (he is an ambassador of the Prince s Trust), the late Pope John Paul II (who requested a private audience with Russell at the Vatican), former US presidents Bill Clinton and George W Bush, the Emperor of Japan, the King of Malaysia and in front a of a worldwide audience of one billion at the opening ceremony of the Commonwealth Games in 2002. In 2013 he performed at Buckingham Palace for the Queen s Coronation Gala Festival and he has also performed at the opening ceremony of the World Games, the Rugby Union World Cup and at the Nou Camp Stadium for the 1999 Champion s League Final with Montserrat Caballé. He is the UK s biggest selling classical artist in history and spent fifty-two consecutive weeks at No.1 in the UK and the US classical charts at the same time. Since 2001 he has sold more than seven million albums, achieved six top ten album placements and received four classical Brit Awards.

4.6 out of 5 stars
4.6 out of 5
117 global ratings
How are ratings calculated?
To calculate the overall star rating and percentage breakdown by star, we don’t use a simple average. Instead, our system considers things like how recent a review is and if the reviewer bought the item on Amazon. It also analyses reviews to verify trustworthiness.

Sue Millman
5.0 out of 5 stars Five Stars
Reviewed in the United Kingdom on 5 November 2016
Verified Purchase
Absolutely fantastic album I would recommend it to all Russell's fans
Read more
3 people found this helpful
Report abuse

Hazel Stubbs
5.0 out of 5 stars Listen and en
Reviewed in the United Kingdom on 5 December 2019
Verified Purchase
I really enjoyed this CD and can say l would listen to it many times again, thank you Russell
Read more
Report abuse

Mr L Bainbridge
4.0 out of 5 stars Russel Watson showing the fantastic variations his voice can achieve
Reviewed in the United Kingdom on 13 January 2019
Verified Purchase
The great versatility of this artist aptly named THE VOICE everything from opera to Country
Read more
Report abuse

Sue
3.0 out of 5 stars Russell Watson, 'true stories cd'
Reviewed in the United Kingdom on 29 December 2018
Verified Purchase
This is not one of my favourites as I have several CD's by Russell Watson that I so much more prefer.
Read more
Report abuse

BTM&M
1.0 out of 5 stars Defective
Reviewed in the United Kingdom on 31 December 2018
Verified Purchase
The CD is defective. Keeps cutting out. This is not my player. As all other CDs play perfectly.
Read more
Report abuse
See all reviews
Get FREE delivery with Amazon Prime
Prime members enjoy FREE Delivery and exclusive access to movies, TV shows, music, Kindle e-books, Twitch Prime, and more.
> Get Started
Back to top
Get to Know Us
Make Money with Us
Let Us Help You
And don't forget:
© 1996-2020, Amazon.com, Inc. or its affiliates