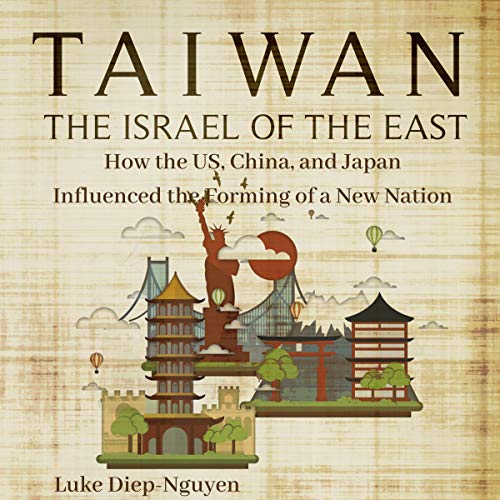 Taiwan - The Israel of the East: How the US, China, and Japan Influenced the Forming of a New Nation

On October 25, 1947, the United States government helped the Chinese Nationalist Party, Kuomingtang (KMT) President Chiang Kai-Shek flee the overwhelming communist forces. President Chiang established the new democratic government known as the Republic of China on an island later to be known as Taiwan, previously a major trading center called the “the beautiful isle” or Formosa. Parallel to the formation of the Republic of China on Taiwan, Israel was being established from Palestine as a result of creating a nation for Jewish refugees and displaced people following the Holocaust during the Second World War. While there have been a lot known about the conflicts between the Palestinians and Israelites over land and discussions on the plights that the people faced, little is known about the natives of Taiwan who were forced to give up their land and under constant occupation from the Dutch to the Japanese to the Chinese.

This audiobook will not only uncover the history of Taiwan and its ethnographic changes under the occupations of multiple foreign nations utilizing a variety of old books written by European explorers and missionaries who were stationed on Taiwan, both European and Asian, over the course of 300 years, as well as using declassified CIA documents to reveal the impact of the United States’ role, particularly the involvement of the CIA, in helping assist the Kuomintang (KMT) in establishing their new democratic government. During the multiple occupations, the native population faced catastrophic repercussions from these foreign nations. From Japanese to the KMT, the massacres of thousands of Taiwanese were recorded, but are not widely known or understood. The 2-28 incident by the KMT led to the death of tens of thousands of Taiwanese to the forced subjugation and exploitation by the Japanese which also led to the deaths of thousands of Taiwanese due to forced labor or other acts of slaughter towards them. This audiobook will not only account for the transformation of Taiwan in the eyes of the colonizers but understand the detrimental impact that the reshaping caused.

The controversy of Taiwan follows its history into modern-day politics as well as its identity. Given the role of the United States in its founding years, it is unclear to many whether the nation of Taiwan was declared as an official nation or if it is a colony belonging to China or the United States. This audiobook examines the role of Taiwan and its history and identity of its people.

4.2 out of 5 stars
4.2 out of 5
11 global ratings
How are ratings calculated?
To calculate the overall star rating and percentage breakdown by star, we don’t use a simple average. Instead, our system considers things like how recent a review is and if the reviewer bought the item on Amazon. It also analyses reviews to verify trustworthiness.

Lewis Mills
2.0 out of 5 stars Very short, superficial
Reviewed in the United Kingdom on 12 February 2021
Verified Purchase
The author's heart is in the right place. There's a clear interest in the history of Taiwan here. However, the book is far too short to justify its price; at just 96 pages (and in large print at that), it's a very brief and superficial read that feels like reading a long encyclopaedia article rather than a book. Of those 96 pages, several are devoted to describing the Meiji Revolution in Japan, which leaves even less space for content of any depth. The author (understandably) feels that indigenous islanders have been historically excluded by Chinese Taiwanese, but he doesn't tell us anything at all about indigenous culture, other than the fact that there were 23 tribes split between the lowlands and highlands. With little background knowledge specific to Taiwan, I still didn't learn that much from this book.

The author can clearly write, and has the ability to sum up historical ideas concisely and clearly. But this book should not cost £8- it ought to be two or three pounds, and honestly, I still probably wouldn't buy it. If you know nothing about the region and just want a very brief introduction, this book might be for you. Otherwise, steer clear.
Read more
2 people found this helpful
Report abuse

Wesley P
5.0 out of 5 stars A definite yes
Reviewed in the United States on 24 July 2020
Verified Purchase
An amazingly informative book on the history of Taiwan. I highly recommend for anyone that loves history and/or is Taiwanese and wants to know anymore about their culture (like me).
Read more
Report abuse

Amazon Customer
5.0 out of 5 stars Short but comprehensive
Reviewed in the United States on 5 May 2020
Verified Purchase
Amazing documentary on Taiwan. A must read.
Read more
Report abuse
See all reviews
Back to top
Get to Know Us
Make Money with Us
Let Us Help You
And don't forget:
© 1996-2021, Amazon.com, Inc. or its affiliates