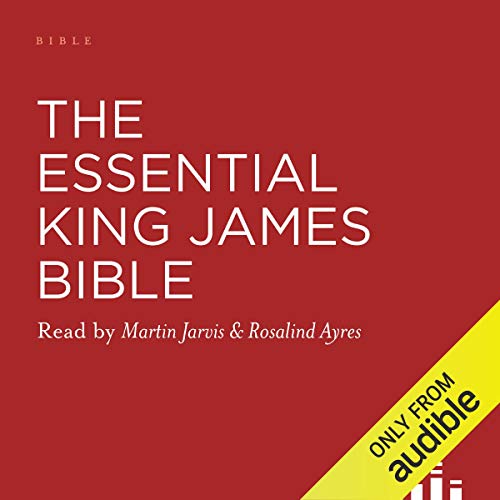 The King James Version of The Bible was first published in 1611, and aside from small modernisations in spelling, has stayed true to the original manuscript ever since. Originally produced to quell tensions in England over which Bible Translation was the truer to use in the Church of England, the KJV is now the most widely-used version of the Bible.

The keys to the version’s success have been simplicity of language and majesty in execution and presentation. Compiling the old and new testaments, the religious text can equally listened to as a story, encompassing a large number of shorter stories. The Bible charts man’s creation in Genesis, as well as the life, death and resurrection of Jesus Christ. It also includes many well-known parables such as The Prodigal Son and The Good Samaritan.

This audio version brings together the 'Essentials' for gaining a better understanding of this great work, and will appeal to everyone who is curious to learn more about Christianity, regardless of their age, race or personal religious views. Truly an essential listen for everybody.

Read more
Public Domain (P)2013 Canongate Books Ltd
Previous page
Next page
Learn more about membership
By completing your purchase, you agree to Audible’s Conditions Of Use and Privacy Notice.
Sold and delivered by Audible, an Amazon company

4.8 out of 5 stars
4.8 out of 5
8 global ratings
How are ratings calculated?
To calculate the overall star rating and percentage breakdown by star, we don’t use a simple average. Instead, our system considers things like how recent a review is and if the reviewer bought the item on Amazon. It also analyses reviews to verify trustworthiness.

neets
5.0 out of 5 stars Five Stars
Reviewed in the United Kingdom on 14 July 2014
Verified Purchase
Love listening to this on the way to work.
Read more
One person found this helpful
Report abuse

Patsy- Granny-Guider-Gardener
5.0 out of 5 stars Bible stories on audio.
Reviewed in the United Kingdom on 24 October 2013
Verified Purchase
Great for relaxation whilst food prepping! Plus reminder in content of stories to lead a fair good life as far as possible
Read more
One person found this helpful
Report abuse

In2theMystic
5.0 out of 5 stars The gift that keeps on giving!
Reviewed in the United States on 5 February 2014
Verified Purchase
I purchased this for a family member and she loves it! She enjoys the way the stories are told by the narrators and how easy the stories are to understand. I'm pleased that she is pleased.
Read more
One person found this helpful
Report abuse
See all reviews