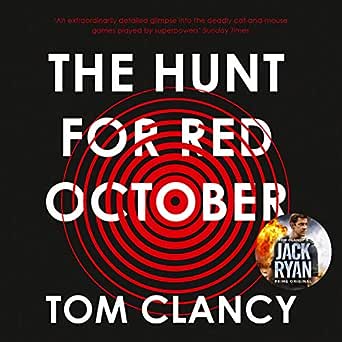 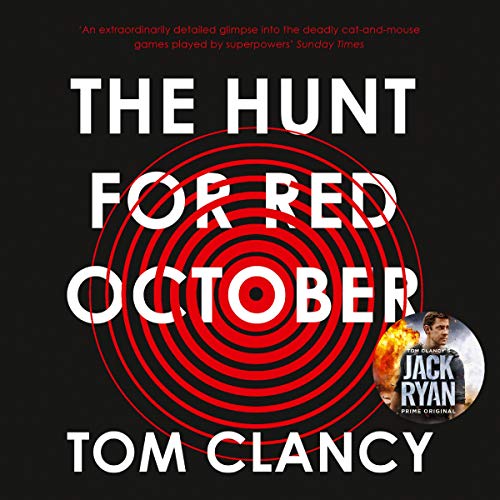 The Hunt for Red October

4.7 out of 5 stars
4.7 out of 5
2,234 global ratings
How are ratings calculated?
To calculate the overall star rating and percentage breakdown by star, we don’t use a simple average. Instead, our system considers things like how recent a review is and if the reviewer bought the item on Amazon. It also analyses reviews to verify trustworthiness.

Davey
TOP 500 REVIEWER
5.0 out of 5 stars Gripping.
Reviewed in Australia on 21 October 2017
Verified Purchase
A gripping cold war thriller as U.S and Soviet Submarines joust. The backroom boys are right there ready to evaluate strategic odds and commit their citizens to do the impossible? All you ever wanted to know about nuclear submarines. Recommended to all thriller readers.
Read more
Helpful
Comment Report abuse

Phil Street
5.0 out of 5 stars Great read. Engaging from start to finish
Reviewed in Australia on 13 April 2014
Verified Purchase
Having read a few Tom Clancy books in the past, I thought it was time I read the novel having seen the movie on numerous occasions. As you'd expect, there is a lot more detail and the character were better fleshed out. I found the narrative easy to follow despite not being interested in the military.

I daresay I will revisit this book in the future. Am now looking for all of his books to read. Some titles not available to the Kindle so will have to look around second hand book stores.

Mrimpact
5.0 out of 5 stars Far better than the movie
Reviewed in Australia on 6 April 2019
Verified Purchase
As expected, this book did not fail to impress. So much detail, you could almost get lost amongst it. An impressive read from start to finish.
Read more
Helpful
Comment Report abuse

Blake Parbery
3.0 out of 5 stars Ok
Reviewed in Australia on 24 October 2018
Verified Purchase
Appreciated the intense detail and realism but in the end it sort of detracted from the story itself. Overall it was ok though
Read more
Helpful
Comment Report abuse

Ron P.
4.0 out of 5 stars A good read!
Reviewed in Australia on 2 August 2020
Verified Purchase
Don't expect it to be like the Movie - it's better!
Great read couldn't put it down!

Fraser T.
5.0 out of 5 stars Another good tom clancy
Reviewed in Australia on 14 November 2020
Verified Purchase
all his books are good, not sure why im even reviewing this because it's pretty obvious
Read more
Helpful
Comment Report abuse
See all reviews

Mr Farenheit
3.0 out of 5 stars Technical and well researched, but sinks below expectation.
Reviewed in the United Kingdom on 12 May 2020
Verified Purchase
The first thing that struck me about this novel was the intricacy and attention to detail. Clancy must have put countless hours in to his research and his passion for naval history clearly shows. That said, I felt that as a casual reader this got in the way of the story at times. The premise is really good and there parts of the book that are genuinely exciting. My final impression is that the story could have been a gripping page turner if it were less technical and a little shorter. As it was, I felt the book outstayed it's welcome somewhat and I was a little relieved when it ended. Also, the 'cold war' pro-America propaganda gets a bit cringey at times, particularly when the Russians seem comically baffled anytime Americans try to describe what freedom is.
Read more
One person found this helpful
Report abuse

Reviewer19
2.0 out of 5 stars Starts well but too technically heavy
Reviewed in the United Kingdom on 20 July 2020
Verified Purchase
As a fan of the film and other submarine stories such as Ice Station Zebra, I was looking forward to reading this and was pleased that it had a gripping start. The opening is well researched and even for those like myself who don't have a great deal of knowledge of the time it was written in and the Soviet Empire, enough detailed is provided.

Unfortunately after a few chapters, the detail becomes too heavy and I found the over description of the sonar equipment off putting. I tried in vain to pick this up several times but found that I couldn't finish it. A bit disappointing but if you prefer a great level of detail I would recommend this.

Betseylee
5.0 out of 5 stars Brilliant, if a little long
Reviewed in the United Kingdom on 30 March 2015
Verified Purchase
I have just spent the last four hours finishing this book. It's now 4 am and a good job I'm retired!

When I say this book is a little long, I don't mean to deprecate it in any way, it is merely that, although I can see the necessity of the political background and descriptive narrative regarding boats, ships, submarines and aircraft, as a "girlie", I found myself tuning out in some of the above and therefore having to reread, to make sure I'd missed nothing important, which of course I hadn't. The basic story, of course, is laid before us quite reasonably in the film, and although I found it considerably helpful that I had seen it, more than once, and knew where it was going, I found the book much more exciting, particularly the last third, hence the four hours staying awake to finish it. It has, of,course, a fatal flaw, ignored by everyone, including me when watching the film; Ramius is a murderer. He kills in cold blood in the first chapter and yet we treat him as a hero, because he defects to the west with a valuable prize for the Americans. Should he not have been tried for his crime? I suppose one assumes he failed to pass this information on to the Americans but nevertheless, we know. Still, I would highly recommend this book as a well constructed adventure story.

Scotslass
5.0 out of 5 stars It’s a thriller with a difference
Reviewed in the United Kingdom on 2 August 2019
Verified Purchase
Having seen the film, so many times..I really wanted to read the book..and boy it doesn’t disappoint..this is the first Tom Clancy novel with the character Jack Ryan..it’s a rollercoaster from Page 1... do not miss this book, even if like me you seen the film..it is worth it!!
Read more
2 people found this helpful
Report abuse

Dave Averiss
5.0 out of 5 stars Wonderful surprise 1 of 22
Reviewed in the United Kingdom on 2 February 2019
Verified Purchase
I down loaded the Tom Clancy Jack Ryan series updated 2017 Best Reading order from that great book store name which begins with AM ?,I have read the first 5 books when released between 1984 & 1991 from the list i have decided to read them again they are a fantastic and exciting read.I have down loaded the first 2 books there 22 in all.Last book released in 2017.
Read more
One person found this helpful
Report abuse
See all reviews
Get FREE delivery with Amazon Prime
Prime members enjoy FREE Delivery and exclusive access to movies, TV shows, music, Kindle e-books, Twitch Prime, and more.
> Get Started
Back to top
Get to Know Us
Make Money with Us
Let Us Help You
And don't forget:
© 1996-2020, Amazon.com, Inc. or its affiliates