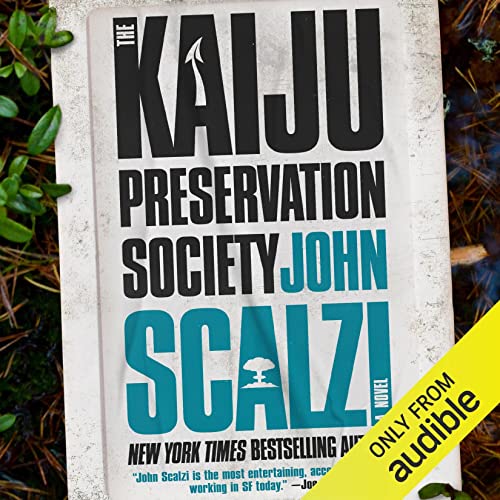 When COVID-19 sweeps through New York City, Jamie Gray is stuck as a dead-end driver for food-delivery apps. That is, until Jamie makes a delivery to an old acquaintance, Tom, who works at what he calls “an animal rights organization”. Tom’s team needs a last-minute grunt to handle things on their next field visit. Jamie, eager to do anything, immediately signs on.

What Tom doesn't tell Jamie is that the animals his team cares for are not here on Earth. Not our Earth, at at least. In an alternate dimension, massive dinosaur-like creatures named Kaiju roam a warm and human-free world. They're the universe's largest and most dangerous panda, and they're in trouble.

It's not just the Kaiju Preservation Society who's found their way to the alternate world. Others have, too. And their carelessness could cause millions back on our Earth to die.

Switch between reading the Kindle book & listening to the Audible narration with Whispersync for Voice.
Get the Audible audiobook for the reduced price of $4.99 after you buy the Kindle book.
Learn more about membership
By completing your purchase, you agree to Audible’s Conditions Of Use and Privacy Notice.
Sold and delivered by Audible, an Amazon company

4.4 out of 5 stars
4.4 out of 5
4,980 global ratings
How are ratings calculated?
To calculate the overall star rating and percentage breakdown by star, we don’t use a simple average. Instead, our system considers things like how recent a review is and if the reviewer bought the item on Amazon. It also analyses reviews to verify trustworthiness.

Brian
TOP 500 REVIEWER
3.0 out of 5 stars Certainly offbeat
Reviewed in Australia on 10 May 2022
Verified Purchase
While entertaining, I found myself thinking that the way the KPS managed their hiring, field practice and training, It’s a wonder that the life expectancy of any of their employees last a week rather than the usual six month tour of duty. You have to suspend your disbelief and set it on fire.
Read more
Helpful
Report abuse

Dean Westcott
4.0 out of 5 stars A great light read for our times
Reviewed in Australia on 3 April 2022
Verified Purchase
I thoroughly enjoyed KPS, it is not heavy or dark or complicated, it is fun, just what we need at the moment. The interaction and dialogue between the characters is funny, biting and believable. The action is quick, no tedious descriptions of travel, the characters are just suddenly there and away we go. Glad you made it Mr Scalzi and glad you got through the darkness. Thank you.
Read more
Helpful
Report abuse

Kindle Customer
3.0 out of 5 stars Not his best work
Reviewed in Australia on 9 April 2022
Verified Purchase
Not his best work, it seemed kind of rushed. It was still ok, and I will still buy anything else he writes
Read more
Helpful
Report abuse

Kerry
5.0 out of 5 stars Fun and original
Reviewed in Australia on 25 March 2022
There are very few books with truly original concepts. This is one... and it’s entertaining.
Read more
Helpful
Report abuse
See all reviews

Mr Lewis
4.0 out of 5 stars Reasonably entertaining little sci-fi novel :-)
Reviewed in the United Kingdom on 8 May 2022
Verified Purchase
An impulse buy, for me, when needing a new book to read on my Kindle. Kaiju Preservation Society is a quick, easy to read sci-fi novel by John Scalzi. I'd agree with his post-script, that it's the literary equivalent of a pop song.

It currently feels extra relevant, kicking off at the start of the Covid pandemic, in New York. Our protagonist's working for an UberEats competitor, seeing an up-tick in demand. And there's an explicit reference to the opening of the genre cult classic "Snow Crash". Which comes up again as a bit of a running joke. So too, a couple more pop sci-fi references.

The story soon escapes miserable reality. I thought, at first, that we were going to taken on an interesting deconstruction of monster movie tropes. Focusing on more realist management banalities and such. But it only goes half way…

On one hand: the crew studying (and aiming to protect) the giant monsters are, realistically, almost all scientists with a complementary array of doctorates. They run through why such massive animals are physically impossible. Then proffer some bio-eco-physio-logical embellishments that might help realise this trope.

On the other hand: the author couldn't resist throwing our protagonist straight into an unreasonable amount of close-call monster action. With excessive reliance on wizz-shwoop-nee-ooow-ca-boom helicopter antics.

Our protagonist appears to be a blatant foil for the target reader demographic: male millennial sci-fi nerd. He's apparently done his English masters dissertation on the topic. So it's a little conspicuous that he gets crowbarred into this situation. More so that he has as much influence as he does.

The main antagonist is a fairly standard super-rich sociopath. Kind of too conveniently behaved, in a way. But with with some insightful characterises that ring true, also. While the Scooby gang are ethnically and gender diverse. All good and fine.

So, overall, this book is an adequate diversion from reality, with a few laughs and chuckles.
Read more
2 people found this helpful
Report abuse

Dan Williams
2.0 out of 5 stars Dull, too predictable and repetitive
Reviewed in the United Kingdom on 24 July 2022
Verified Purchase
The author's note does say it's popcorn (more or less). Fine with that. But the salt this batch needed to make it nice would've approached a fatal dose.

I bought this book accidentally, not realising it was another by the author of collapsing empire which I disliked intensely. I was pleased to discover this was a lot better. But not 'better enough' for me to enjoy.

That said, it was a double-first for me. Firstly, the FIRST first, I've never read a book that's well narrated and paced but falls flat on the entertainment score regardless. It was down to the endless inane slapstick dialogue, I think. The gags weren't that funny to start with. But their endless repetition, well..
Does it still count as cruelty if the horse is already dead? A predictable plot is also fine but to work, you at least need the suspense of not knowing quite how it when it will all come together. This book offered both but only in homeopathic doses, insufficient to remedy its chronic signposting.

On to the second first. From reading the author's note about his time during COVID etc, I think I ended up liking him (or empathising with him as a distant colleague?) more than his books. Something in his note struck a chord with me somehow, I guess. Usually they're only of passing interest.

Which all makes me feel mean giving this one a lousy rating. But, well, I paid hard-earned cash-money for the download, and, all said and done, didn't like what I got. So gotta be honest I'm afraid.

Sorry but would not recommend.
Read more
One person found this helpful
Report abuse

Suzanne Clune
5.0 out of 5 stars What A Blast
Reviewed in the United Kingdom on 7 April 2022
Verified Purchase
A standalone that's under 300 pages and written by John Scalzi? Oh and it has Godzilla like creatures?! You bet I pre-ordered this as soon as I heard the details! Mr. Scalzi says he had fun writing this. Well I had an absolute blast of a time reading it. This story was hysterically funny and I loved evey moment of it.

It had an abundance of that irreverent humour and banter I associate with the author's writing style. The characters were great. Jamie, the MC was a sweetheart, and Niamh, one of the scientists was an absolute scream. They all were really! A night on the town with them would be a hilariously good time.

I really enjoyed following Jamie and the crew as they adjust to their new jobs and learn how to care for the Kaiju as well as adjust to their new surroundings on an alternate Earth. The banter and dialogue were hilariously entertaining, the science was interesting and the book moved along at a nice pace.

I really needed a fun, lighter story like this. It's the equivalent of a good popcorn flick. Highly entertaining, with just enough plot to keep you entertained without taxing the brain. It made me laugh and really lifted my mood. I already know this is going to be one of my comfort reads and I can see myself re-reading this multiple times in the future.
Read more
One person found this helpful
Report abuse

TheFlyer
3.0 out of 5 stars Book or TV series script?
Reviewed in the United Kingdom on 23 March 2022
Verified Purchase
I love Scalzi’s writing. Usually. But this felt less like a novel that has been built up in layers and more like a storyline for a TV mini series. It is very dialogue based. The structure feels like episodes not chapters. It has a shallow and linear single person perspective. It feels edited- as though richness and background have been removed to squeeze events into a 50 minute runtime. Plus a ‘cast’ of characters who basically make up almost every scene.

I read it. Witty in parts. Lot of undeveloped potential in the concept. But if I had stopped reading half way through, I don’t think I would have felt that I had missed anything.
Read more
2 people found this helpful
Report abuse

Gavin Patterson
2.0 out of 5 stars A Godzilla cheese fest
Reviewed in the United Kingdom on 12 April 2022
Verified Purchase
Jamie Gray loses his job and is thrown into a role of delivering food to people’s doors. Until one day, he serves an old friend who invites him on a journey, one that will change him forever.

The story is fairly short and I managed to finish this within an hour or two. KPS doesn’t break down any new doors and it isn’t very deep, however it was fun at times. I couldn’t get used to the humour, it felt like a cheesy sit com and I wanted to roll my eyes one quite a few occasions. I really can’t see anyone living with their sense of humour, it felt like you were waiting on the fake audience laughter.

This was maybe not my type of book, it had big potential and it could have been something special but fell flat.