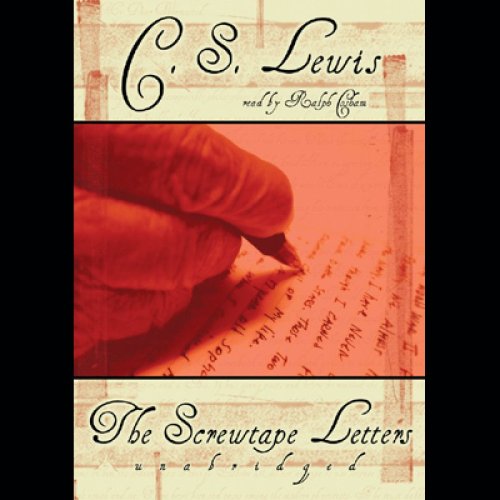 4.7 out of 5 stars 9,106 ratings
See all formats and editions
Sorry, there was a problem loading this page. Try again.
Previous page
Next page

This title is not available for you.

Sorry, that title isn't available in your region. If you think this is a mistake, please call Audible Customer Care at 1800 736-910.

4.7 out of 5 stars
4.7 out of 5
9,106 global ratings
How are ratings calculated?
To calculate the overall star rating and percentage breakdown by star, we don’t use a simple average. Instead, our system considers things like how recent a review is and if the reviewer bought the item on Amazon. It also analyses reviews to verify trustworthiness.

Fiona Leen
5.0 out of 5 stars insightful & perhaps uncomfortably amusing
Reviewed in Australia on 2 February 2016
Verified Purchase
The Screwtape letters are a correspondence that offer advise to a novice devil on how to temp his 'patient' such that he, completely unawares is loosened from Gods influence and becomes property of hell. Seen from this perspective, in the war room of the devil so to speak, we see our self hood more clearly. How easily we are confused and led astray, as well as what joys we forsake and the needless pains we take upon ourself, as we ignore Gods claim upon us to be obedient to Him. Happily the patient recovers his wits sufficiently to be rescued by Grace and some hilarity ensues as the junior devil is appraised of his likely fate at failing in his tasks . Though not explained the junior devil makes his way into administration and delivers a toast at the graduation of other junior tempters where the bigger picture is revealed as a context in which the individual is to be lost . A great read.
Read more
One person found this helpful
Helpful
Report abuse

Wilhelm
5.0 out of 5 stars Probably the most thought provoking book I have ever read
Reviewed in Australia on 6 April 2022
Verified Purchase
"You die and die and then you are beyond death." A true masterpiece in every sense and as applicable to the now as it was then.
Read more
Helpful
Report abuse

Lilly Mann
4.0 out of 5 stars An insightful classic from a master storyteller.
Reviewed in Australia on 16 January 2016
Verified Purchase
Loved this book. Even though it's set in a bygone era the applications are just the same today. CS Lewis has a gift for weaving the truths of the Bible into entertaining stories with lessons to learn throughout each chapter.
Read more
Helpful
Report abuse

Lorna Ruth Jenkins
5.0 out of 5 stars One of the best books I've read
Reviewed in Australia on 17 November 2015
Verified Purchase
One of the best books I've read. Seeing the world through the eyes of the enemy is a bit of a shock as he twists every detail of our lives into reverse. We are also reminded that he is always and absolutely wrong.
Read more
Helpful
Report abuse

GrandyZ
5.0 out of 5 stars Five Stars
Reviewed in Australia on 10 July 2015
Verified Purchase
As applicable today as when it was written
Read more
Helpful
Report abuse
See all reviews

Sarah D
1.0 out of 5 stars Appalling version, mangling this wonderful classic
Reviewed in the United Kingdom on 19 July 2020
Verified Purchase
I have read The Screwtape Letters before and it's a wonderful, thought-provoking book written in an engaging way. But the Kindle version I downloaded from this link is APPALLING. The person who has prepared it as an e-book has zero knowledge of English punctuation or e-book formatting. It begins with a notice that it must be made available for no payment (so why was I charged for it?) and then has some kind of copyright disclaimer, presumably because the person who produced it may not have permission to do so. Supposedly produced by Samizdat University Press in Canada....AVOID this version. Buy the real book and gain from its wisdom but don't waste your money on this kindle one
Read more
23 people found this helpful
Report abuse

M. Dowden
5.0 out of 5 stars A Great Read
Reviewed in the United Kingdom on 17 October 2017
Verified Purchase
I have read this book a few times over the years and every time I re-read it I find it more humorous. This kindle edition has the letters and then as a bonus the later piece by CS Lewis, Screwtape Proposes A Toast.

An epistolary novel you don’t have to be a Christian to enjoy this, which I think has caused some misunderstanding and led to people not reading this in the past. What we have are a series of letters from Screwtape, a demon, to his demonic nephew Wormwood, who is tasked with bringing an average Englishman into the Satanic fold.

Why this works so well is that it is deeply funny and quite cynical. Although we don’t see letters from Wormwood we can guess that his ideas are along the lines of outright and extravagant sinning, whereas Screwtape proposes something a lot subtler. Thus, whilst for instance Wormwood is gloating over the Second World War Screwtape is rightfully worried, as if for instance someone dies in the fighting before being fully brought over to his side, then they have lost a person, and have lost that soul.

We thus end up with religious thought here and demons trying to work out not only the behaviour of God, but of humanity, making for some very good insights into the way we behave and what we think.

Screwtape Proposes A Toast is the demon giving a speech, and this looks at changes in educational procedure and other items that were relevant at the time and that Lewis wanted to address. In all then we have here a very thoughtful as well as a funny book, that should give anyone reading it pause for thought. Whatever religious persuasion you are, or an atheist this still makes for a wonderful read, and shows the author on top form.
Read more
37 people found this helpful
Report abuse

Hannah1
5.0 out of 5 stars Uncomfortably true.
Reviewed in the United Kingdom on 5 January 2018
Verified Purchase
A spiritual gem that rings horribly true. Lewis probes the human mind and uncovers some very uncomfortable truths. One reviewer is concerned that the book suggests that it is possible to lose one's salvation. Well, yes, according to the words of Christ in the Gospels it is. However, without going into theological matters, in letter no. 5 Screwtape points out that in the extremity of temptation, if the ‘patient’ “applies to Enemy headquarters...the post is nearly always defended.” Which is just as well for those of us who, at least to some extent, know our own weaknesses. Thank God for Lewis!
Read more
21 people found this helpful
Report abuse

Bookman
3.0 out of 5 stars Good
Reviewed in the United Kingdom on 5 April 2019
Verified Purchase
Good book. It used to be one of my favourite books for many years, but I now see that it's not as great as I thought. I know that C.S. Lewis is highly favoured among Christians and holds a prominent position but some of the things he said in the book are an utter embarrassment. Among many is his famous quote about buddhists and their salvation in Mere Christianity. Or in the book on Psalms saying that we need to leave imprecatory psalms alone or in his essays saying that Jesus's words about his coming back before this generation disappears are the most embarrassing verses in the whole Bible. I think I've just followed for years the middle class intellectual hype which is so prevalent nowadays and which replaced love in the churches.
Read more
9 people found this helpful
Report abuse

Logos
5.0 out of 5 stars Devilishly Good Guidance
Reviewed in the United Kingdom on 17 February 2022
Verified Purchase
This is a is series of letters from a senior devil to a junior on the most effective way of tempting people to sin. In an age where the concept of sin is unknown and only 'my truth' is acceptable this exposes the essential selfishness behind this lifestyle.

It is not a heavy treatise, rather a series of comments on how self-love turns on the practitioner; but done in an avuncular veiin. I recomend it.
Read more
2 people found this helpful
Report abuse
See all reviews