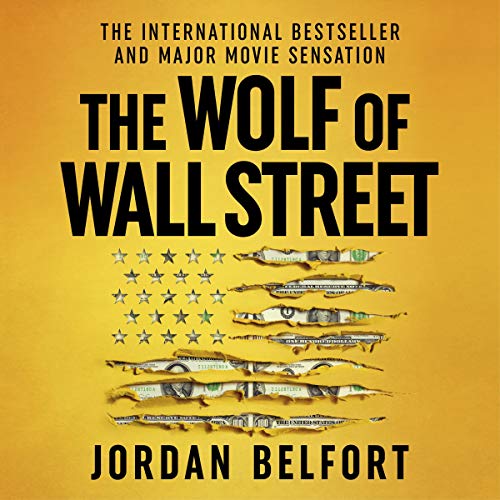 The Wolf of Wall Street

Stock market multimillionaire at 26, federal convict at 36, he partied like a rock star, lived like a king, and barely survived his rise and fall as an American entrepreneurial icon. By day he made thousands of dollars a minute. By night he spent it as fast as he could, on drugs, sex, and international globe-trotting. From the binge that sunk a 170-foot motor yacht, crashed a Gulfstream jet, and ran up a $700,000 hotel tab, to the wife and kids who waited for him for at home, and the fast-talking, hard-partying young stockbrokers who called him king and did his bidding, here, in his own inimitable words, is the story of the ill-fated genius they called...The Wolf of Wall Street.

In the 1990s Jordan Belfort, former kingpin of the notorious investment firm Stratton Oakmont, became one of the most infamous names in American finance: a brilliant, conniving stock-chopper who led his merry mob on a wild ride out of the canyons of Wall Street and into a massive office on Long Island. In this astounding and hilarious tell-all autobiography, Belfort narrates a story of greed, power, and excess no one could invent - the story of an ordinary guy who went from hustling Italian ices at sixteen to making hundreds of millions. Until it all came crashing down.

Read more
©2007 Jordan Belfort (P)2013 John Murray Press
Previous page
Next page
Learn more about membership
By completing your purchase, you agree to Audible’s Conditions Of Use and Privacy Notice.
Sold and delivered by Audible, an Amazon company

4.4 out of 5 stars
4.4 out of 5
2,934 global ratings
How are ratings calculated?
To calculate the overall star rating and percentage breakdown by star, we don’t use a simple average. Instead, our system considers things like how recent a review is and if the reviewer bought the item on Amazon. It also analyses reviews to verify trustworthiness.

Tristan Baxter
2.0 out of 5 stars An insightful bragfest
Reviewed in Australia on 14 January 2019
Verified Purchase
I’d have thought this would be an interesting look behind the scenes of a cunning and cut throat businessman and his lavish lifestyle, and that it most certainly is. Its not that I expected to like Belfort all that much, and I really had to distance my idea of him from that charming and mischievous DeCaprio portrayal, but I found him in these pages to be very much an undesirable and abhorrent person. I’m not sure if any lessons were learnt by this guy, as all I tended to see was a long list of how much stuff he had and how much it cost, and how “crazy” his life was. It’s like a very long one sided conversation with a person who so desperately wants to be validated and envied by all. The real surprise is how Scorsese managed to make a very entertaining film out of this material.
Read more
Helpful
Report abuse

Sydney1981
4.0 out of 5 stars A good, easy read.
Reviewed in Australia on 1 November 2015
Verified Purchase
A great, fast-paced read that delves into the world of sex, drugs and stockbroking! A good, easy read.

Bertie
5.0 out of 5 stars Excellent Read
Reviewed in Australia on 17 October 2014
Verified Purchase
I'm a slow reader and I read other books but I have to say its a book that is interesting and hilarious.

I love the way it was written.

Brett Waldock
5.0 out of 5 stars The Wolf of Wall Street
Reviewed in Australia on 12 April 2014
Verified Purchase
sensational reading, struggled to put it down once starting. Will search for more from the author with out fail. .
Read more
Helpful
Report abuse

Sonja Wennekes
5.0 out of 5 stars Wow!!!
Reviewed in Australia on 28 January 2014
Verified Purchase
Can't wait to see the movie. I had to read the book beforehand to get the bigger picture. How Jordan survived this life is truly amazing!!!
Read more
One person found this helpful
Helpful
Report abuse

Geoffrey Michael Herriman
5.0 out of 5 stars Five Stars
Reviewed in Australia on 25 October 2014
Verified Purchase
I was spellbound from the first page,I`m wanting more of his story!!!!!!
Read more
Helpful
Report abuse

Robert Maddern
4.0 out of 5 stars The Wolf of Wall Street
Reviewed in Australia on 5 February 2015
Verified Purchase
A good book easy to read and well thought out. I will now watch the movie
Read more
Helpful
Report abuse
See all reviews

SW
1.0 out of 5 stars Self-obsessed and boring
Reviewed in the United Kingdom on 11 April 2017
Verified Purchase
If you've seen the film, do yourself a favour and don't put yourself through the trauma of trying to endure Belfort's poorly written celebration of his own debauchery. Yes, visually it works on the screen. Written down, it's just poorly-written narcissism
Read more
25 people found this helpful
Report abuse

Ben Warden
5.0 out of 5 stars Extraordinary storytelling
Reviewed in the United Kingdom on 30 June 2021
Verified Purchase
There are lot of twists and turns in this thrill ride of a book. Sort of like Fight Club, it's not what you expect. And like Trainspotting, it really is a warts n all roller-coaster and a compulsive tale. It's thought provoking. It's very funny in places. There's no pretence with this book. It's very naked in its detail throughout, and will cause a variety of reader reactions and interpretations alike. It's obviously lacking in morality. And it doesn't pretend to be moral. But I think the reader can learn something new about themselves in relation to Jordan and his crazy world along the way. Loved the book and now one of my all time favourites.
Read more
One person found this helpful
Report abuse

Kindle Customer
5.0 out of 5 stars A truly incredible read!
Reviewed in the United Kingdom on 23 May 2021
Verified Purchase
I had a notion to check out this book as the film of the same name is one of my all time favourites and I've never looked back. It was absolutely tremendous and really fascinating! I liked the book the best as there was more story in it and I learned more from it also. Jordan Belfort is a really interesting man and I enjoyed reading about his experiences as a stockbroker and also of his experiences outside of work and personal life. If anyone who like myself enjoyed the film "The Wolf Of Wall Street" and haven't read the book I'd highly recommend them to do so. I'm sure they would enjoy it as much as I did.
Read more
One person found this helpful
Report abuse

Niall Mulrine
5.0 out of 5 stars Great insight into a born salesman who took wrong path
Reviewed in the United Kingdom on 15 June 2020
Verified Purchase
The flow of writing was conversational which made it easy to follow and keep picking up.
I admire Jordan intelligence, vision and hard work. He had excessive lust for life which I can identify with. But he made a success of himself several times and he helped people up along the way. The good soul was always there but only seen visibly to the bigger world when he got sober.
Great love for his kids is nice to hear being talked about and how they were his lighthouse when he was off course.
Can't wait to see part 2......
Read more
2 people found this helpful
Report abuse

Amazon Customer
3.0 out of 5 stars Not as enjoyable as I had expected.
Reviewed in the United Kingdom on 31 August 2018
Verified Purchase
I was very interested in learning about Jordan Belfort’s frauds and lavish lifestyle after seeing the movie many times (which I loved). But the book felt like a shameless showing off of Belfort’s hooker-filled lifestyle, without going into too much detail about the finance part of his activities with Stratton Oakmont. It was a « fun » read but I definitely wouldn’t read it again as it failed many times to really suck me into the story.
Read more
11 people found this helpful
Report abuse
See all reviews