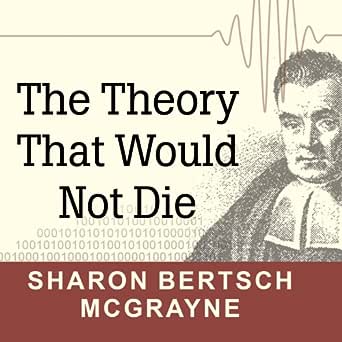 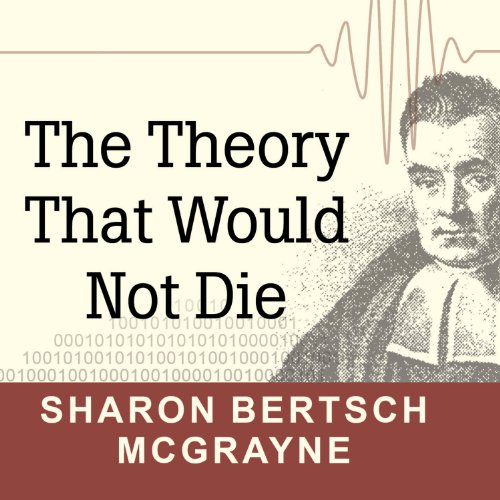 The Theory That Would Not Die: How Bayes' Rule Cracked the Enigma Code, Hunted Down Russian Submarines, and Emerged Triumphant from Two Centuries of Controversy

4.3 out of 5 stars
4.3 out of 5
270 global ratings
How are ratings calculated?
To calculate the overall star rating and percentage breakdown by star, we don’t use a simple average. Instead, our system considers things like how recent a review is and if the reviewer bought the item on Amazon. It also analyses reviews to verify trustworthiness.

Drew
5.0 out of 5 stars All about that Bayes
Reviewed in Australia on 6 March 2020
Verified Purchase
Very well written and informative book, I definitely recommend it.
Read more
Helpful
Report abuse
See all reviews

Seafordian
5.0 out of 5 stars A wellwritten account for the non-specialist reader
Reviewed in the United Kingdom on 18 July 2011
Verified Purchase
Whether or not you will enjoy this book depends on who you are. If you enjoy reading books about popular science, and trying to solve the occasional simple mathematical or logical puzzle, then you are ready for this one. If you want to understand the theory in any depth, or use it to solve problems, then you will need at least first-year undergraduate statistics to get started, much more to make progress -­ and a book with the formal mathematics, but begin with this one first to get a perspective on the field before going into detail.

It is not obvious how you should use data to decide what to believe or how to act, and, as theories of statistics were developed, statisticians tried several different ways of thinking about data and the conclusions that could reasonably be drawn from them. Unfortunately the divisions of opinion (perhaps largely due to the personalities of the leading thinkers) resulted in acrimonious and inconclusive arguments.

Thomas Bayes was a clergyman who died in 1761, leaving behind some mathematical papers. One of these was revised and corrected by Richard Price, so we don't know quite what Bayes wrote or what he meant. This paper was the origin of two things: (1) the widely-used and uncontroversial `Bayes Theorem', and (2) the controversial idea that probability could be expressed in terms of a measure of belief. In Bayesian statistics the researcher puts a belief into numerical terms and refines this belief in the light of subsequently observed data. The 'subjective' aspect of the theory brought it into disrepute, where it lingered for nearly 200 years. Many people faced with practical problems found that Bayesian methods worked, but either they didn't know about Bayes or they preferred not to invite criticism by mentioning his name.

In the last 60 years or so there has been a big revival in interest in Bayes theory, and it has been used to solve many problems that weren't amenable to traditional methods. The big barrier was that some of the methods needed huge calculations, but with the availability of cheap, fast computers and new methods of calculation that barrier has almost disappeared.

Sharon Bertsch Mcgrayne's book gives a very clear and thorough history of "the theory that would not die." As a practising statistician for more than 40 years I knew much of the published work that she has written about, and can vouch for her accuracy (there are a few corrections on her website), but until I read this book I did not have a clear idea of all of the historical developments and controversies. My only criticism is that the bibliography is organised by chapters, rather than as one alphabetically ordered sequence.
Read more
70 people found this helpful
Report abuse

Conall Boyle
3.0 out of 5 stars Oh Dear! More unbounded enthusaism for Bayes
Reviewed in the United Kingdom on 23 June 2013
Verified Purchase
Well first off, I'm delighted to see that co-founder Richard Price of Llangeinor is given proper credit. (Llangeinor in South Wales, is near where I live, But Rev Price did much more than re-write Rev Bayes's notes)

And I'm fascinated by the names of all the statisticians who I'd heard about, and a few I've even met (I taught stats at a midlands University).

But having re-read it more closely, I now understand my quibbles: All Bayesians are treated as unsung heroes, the un-converted are knaves.

For instance: p116 "Cornfield's identification [in the Framingham study] in 1962 of the most critical risks factors [high cholesterol, high blood pressure] for cardiovascular disease produced....a dramatic drop in death rates from c.v. diease.", because it seems that Cornfield used Bayes and the others didn't.

Now this is a complete travesty! Read Gary Taubes 'The Diet Delusion' and you'll discover that poor analysis, and especially pre-conceptions meant that Framingham produced the 'wrong' results. Apart from smoking, none of the other factors matter. The low-fat obsession is making matters worse. A clear example of bad priors causing wrong posteriors?

So did Cornfield and his bayesianism lead to these false conclusions? Ms. McGrayne, the author could be forgiven for not knowing this, but it shows how the book works -- run with any 'success' for bayesianism (and ignore the failures?)

Her attitude to my favourite statistician, Tukey is bizarre to say the least. She claims he did all sorts of secret work both for the military and for commercial clients that used Bayes, yet ignored his plain-sight comments that EDA -- exploratory data analysis was what matters to most problem solvers; that CBA confirmatory data analysis was just an ornamental final flourish, and that was true for both bayesians and frequentists.[disclaimer: I wrote a book on EDA misleadingly titled 'Mastering statistics with your micro-computer' 1986]

p 236 is to say the least, disingenuous! Greenspan, chairman of the Fed said in 2004 he used bayesian ideas to assess risk in financial policy. Ooops! He was proven spectacularly wrong by 2008! But Greenspan, claims Ms McGrayne didn't do Bayes properly. ho! ho! pull the other one!

This is a good book, well researched, and shines a light on otherwise neglected characters (statisticians, like me!). But she's caught the bayesian bug in spades!
Read more
26 people found this helpful
Report abuse

Matthew Leitch
5.0 out of 5 stars Excellent book filling an important gap
Reviewed in the United Kingdom on 3 February 2013
Verified Purchase
This riveting read deserves five stars because there are lots of books, papers, and websites about the maths of Bayes but this is the first really good description of the history and personalities involved. I think it's great.

If you're interested in the maths it is perhaps best to look for original papers on the internet. I do know enough of the maths that I'm not frustrated, and I understand enough of the principles to know that the author has grasped them pretty well.

I have books whose authors were just names to me before but now they are personalities. I have also been able to put things into a useful historical context and see how the events described in the book have an influence even now.

Some of them actually happened within my lifetime and remind me of the intolerant git who presented the course on statistics within my psychology degree course.
Read more
One person found this helpful
Report abuse

Ralph
4.0 out of 5 stars Fascinating history/philosophy of applied statistics - but a little too light on mathematics for 5 stars
Reviewed in the United Kingdom on 28 June 2016
Verified Purchase
Very well written book - well structured, entertaining and researched. A useful introduction to Bayes theorem and application.

But it's just a little too much about the history of classic statistics vs pragmatic (Bayes) practicioners. And some of the history is very recent - the disagreements over the different approaches still going into the 1990s - though I do now feel the need to double check this schism against other sources.

Rather too little on the mathematics. The basic concept is easy and well covered enough in the Appendix giving some worked examples, but there is clearly much more to it that that eg MCMC. At some point I'll want to have a play with WinBUGS.
Read more
Report abuse

K T
4.0 out of 5 stars An excellent history, virtually no mathematical content
Reviewed in the United Kingdom on 12 August 2012
Verified Purchase
The first half of the book is strong, but the narrative of the present day is very cursory.
The book is an excellently researched history of Bayes' Theorem and does a particularly good job of tracing its development at the hands of Price and Laplace. You also get a great flavour of the cryptographic efforts Second World War in general and the story of those personalities is told well.
The case study of estimating the probability of a nuclear accident is fascinating and was one of the strongest parts of the book. It provides a great insight into the application of Bayes' Theorem to practical problems, and the process of breaking down the larger problem into its constituent parts.
However as the story gets towards modern developments such as Kalman filters and Markov chain methods, developments are introduced at a pretty quick pace without much explanation. There is a marked contrast between the hasty way the Gibbs sampler is mentioned with the thoroughness with which cryptographic uses were explained earlier.
Overall, a pretty good read as a history book but given its likely audience could perhaps have used more numerical illustrations.
Read more
One person found this helpful
Report abuse
See all reviews
Back to top
Get to Know Us
Make Money with Us
Let Us Help You
And don't forget:
© 1996-2021, Amazon.com, Inc. or its affiliates