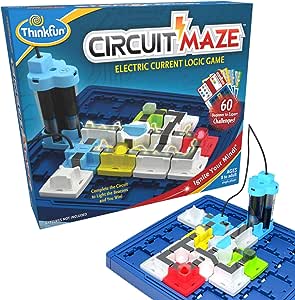 Brand: ThinkFun
4.6 out of 5 stars 8,696 ratings
Available from these sellers.

With Circuit Maze, your goal is to create a real electrical circuit that lights up designated beacons. The 60 challenges are tricky and clever, providing hours of electrifying fun. Plus, when playing Circuit Maze, you will discover how circuits actually work.

Arrange the tokens to form a circuit path to light up the beacons indicated on the challenge card.

4.6 out of 5 stars
4.6 out of 5
8,696 global ratings
How are ratings calculated?
To calculate the overall star rating and percentage breakdown by star, we don’t use a simple average. Instead, our system considers things like how recent a review is and if the reviewer bought the item on Amazon. It also analyses reviews to verify trustworthiness.

Julian Tan
4.0 out of 5 stars Good concept
Reviewed in Australia on 6 August 2020
Style Name: Circuit MazeVerified Purchase
Single player game. Good idea that teaches the basics of circuits and electronics.
There are a number of electronics concepts that it tries to get across, and is well explained in the manual.
Children should read the manual to understand the theory behind the game.

Kept my 10 year old son engaged for a little bit, but after a while got a bit dry and repetitive.

Stu in Melbourne
4.0 out of 5 stars Awesome fun
Reviewed in Australia on 24 January 2020
Style Name: Gravity MazeVerified Purchase
Great game. It’s advertised for single players but the fun is playong with my son (8yrs) and getting him to verbalise a plan and his logic. The balls are a bit small (we have lost one already) but that is a minor gripe.
Read more
Helpful
Comment Report abuse

Susan S
5.0 out of 5 stars A great challenge activity
Reviewed in Australia on 27 September 2020
Style Name: Gravity MazeVerified Purchase
My 9 and 6 year olds both like this game. It is interesting enough to keep them occupied for a good 30 mins. I havent had a good look at the rules but it does need an adult to start them up. Then they were were working together quite well.
Read more
Helpful
Comment Report abuse

Jedd Y
5.0 out of 5 stars Good game
Reviewed in Australia on 6 September 2019
Style Name: Gravity MazeVerified Purchase
Very good game, I brought two, one for myself one for friend, we all love it!!
Read more
One person found this helpful
Helpful
Comment Report abuse

Virginia Ryan
5.0 out of 5 stars Circuit Fun
Reviewed in Australia on 30 August 2020
Style Name: Circuit MazeVerified Purchase
My granddaughter who turned 7 loved it for her birthday. She played with it non stop for 3 hours!
Read more
One person found this helpful
Helpful
Comment Report abuse

Peter
5.0 out of 5 stars Well made package.
Reviewed in Australia on 6 February 2020
Style Name: Circuit MazeVerified Purchase
The item is well made and easy to use. It might be a little too easy but does get the concepts across better than just a book say.
Read more
Helpful
Comment Report abuse

Alexandra
5.0 out of 5 stars Perfect present
Reviewed in Australia on 29 October 2020
Style Name: Gravity MazeVerified Purchase
I actually bought it for my friends 5 year old, he is very imaginative and loves coming up with his own paths
Read more
Helpful
Comment Report abuse

Mr SAMUEL COLEGROVE
5.0 out of 5 stars Excellant Xmas Present for a 7 year Old Boy
Reviewed in Australia on 21 December 2019
Style Name: Gravity MazeVerified Purchase
Christmas has yet to come and so no experience with it. We are looking forward to seeing how it helps with progressing involved play.
Read more
Helpful
Comment Report abuse
See all reviews

S. D. Spicer
3.0 out of 5 stars Brilliant, but flawed
Reviewed in the United Kingdom on 22 August 2017
Style Name: Circuit MazeVerified Purchase
Hovered between three and four stars on this review. I would like to have given it five as it's a great product and I think there's plenty of learning that can be done through the play.
Basically these are 'simple' electrical circuits, using LEDs in series and parallel (and sometimes both) to complete a circuit whose layout is shown on the puzzle card. The puzzle is both to illuminate the LEDs as shown and complete the layout with the pieces given. Usually there's only one right answer and there are a number of wrong answers where the LEDs won't light up as requested.
Reading the instruction, although brief is recommended as there's a few things that you might miss otherwise such as the plus sign on the LED connects with the plus sign on the battery and not the other way around.
The puzzles range from the elementary to very tricky. Puzzles with switches are normally and bit harder but a bit more satisfying when they work. How tricky? Well one of the hard puzzles too two people, one studying electrical engineering at University over an hour to solve.They also look good as well and I came away thinking that having a few more components such as resistors or transistor switches would make it even more fun.
The big downside, and why it doesn't get five stars is the actual board. I'm not sure if mine was faulty. There seemed to be a rubber foot missing and I made a substitute that improved thing. But even with that there's a real issue that plug one component in and another will pop out. Once you had some practice this can be overcome, but I would consider that child - or even some adults - would find this frustrating and give up or return the product as faulty.
I notice on ThinkFun's website, and in US reviews the issue with the board is mentioned a number of time and ThinkFun have responded by saying there's an updated board that solves the problem. I have no idea if this is the improved board or the old one. I did email, tweet and FB ThinkFun about this issue when it arose. But I have had no reply in two weeks.
So my review is "brilliant, but flawed".

Annie L
4.0 out of 5 stars Brilliant
Reviewed in the United Kingdom on 26 February 2020
Style Name: Gravity MazeVerified Purchase
I live the idea of this. My son is a mini maths whiz and so I loved the challenge this would give him. He works it out using only the sticks at the minute without using the cards. At 6 he manipulates the maze and takes his time to work out why the marble isn't working. As he gets older I will explain the card use to him but for now he is enjoying it as a maze maker. He loves it. I am really pleased and I like the fact the maze will still present new problems as he gets older. His older brother uses the cards and gets stuck sometimes. It's a fab brain challenging alternative to computer games!
Read more
4 people found this helpful
Report abuse

Laura Davey
5.0 out of 5 stars Think Fun have done it again
Reviewed in the United Kingdom on 9 June 2018
Style Name: Circuit MazeVerified Purchase
Having watched my Rush Hour entertain, frustrate and focus all ages in all situations for over ten years now, I decided to get this for my son, who is only four, but a huge fan of puzzle and logic games. As with Rush Hour, there are two means of solving the puzzles, by using observation and logic, creating paths in your mind before putting the pieces in, or simply by continued trial and error. We all love it. Though it doesn’t come cheap, it’s worth every penny- Comparatively, it’s a lot cheaper than console games and will last a lot longer. My son is very young (it says ages 8+ on the box), but he has grasped the concept of a circuit path and can work out several of the beginner level puzzles. He also enjoys getting the pieces out and making up his own circuits. Hubby and I scratch our heads over the more complex one, and we all really enjoy it. Some of the pieces are a little tight-fitting and pop out a bit, so occasionally, a little holding in place is required. Like Rush hour before, it’s not an adrenaline-inducing game, but is ideal for puzzlers of all ages, enables focus through both logic and manual building, can easily be packed for holidays etc and for parents, it has the potential to keep children occupied for AGES. Simply love it.
Read more
7 people found this helpful
Report abuse

Emma
5.0 out of 5 stars Great - but more suited to adults than 8 year olds
Reviewed in the United Kingdom on 4 December 2018
Style Name: Gravity MazeVerified Purchase
A fun logic puzzle for adults or teenagers. Younger kids will struggle to use the instruction cards but I suppose you could create your own simpler challenges. Good quality but it's not uncommon for the marble to stop or to jump out of a correct run, which is slightly disappointing. Overall it's a great idea though.
Read more
5 people found this helpful
Report abuse

Daksina
5.0 out of 5 stars A family favourite!
Reviewed in the United Kingdom on 21 July 2018
Style Name: Gravity MazeVerified Purchase
This is such a fantastic game! Each level gets harder and harder, and even adults that have had a go have loved it and been stumped at some of the more difficult levels. It is a great game for keeping kids engaged when you can't play with them as it is a one player game. My 7 and 10 year olds love the more challenging mazes. I would definitely recommend it.
Read more
4 people found this helpful
Report abuse
See all reviews
Get FREE delivery with Amazon Prime
Prime members enjoy FREE Delivery and exclusive access to movies, TV shows, music, Kindle e-books, Twitch Prime, and more.
> Get Started
Back to top
Get to Know Us
Make Money with Us
Let Us Help You
And don't forget:
© 1996-2020, Amazon.com, Inc. or its affiliates