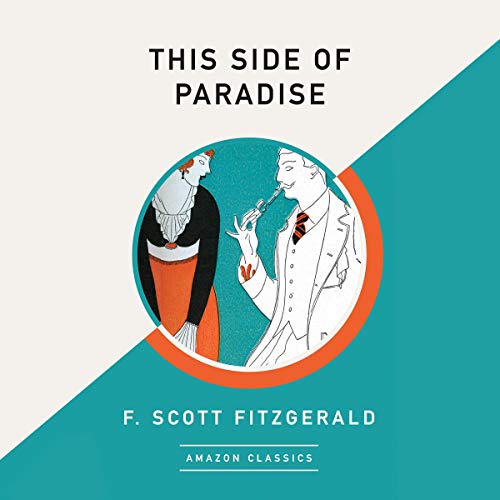 This Side of Paradise (AmazonClassics Edition)

4.1 out of 5 stars
4.1 out of 5
1,069 global ratings
How are ratings calculated?
To calculate the overall star rating and percentage breakdown by star, we don’t use a simple average. Instead, our system considers things like how recent a review is and if the reviewer bought the item on Amazon. It also analyses reviews to verify trustworthiness.

There are 0 reviews and 7 ratings from Australia

Al
1.0 out of 5 stars Torrential
Reviewed in the United Kingdom on 25 August 2018
Verified Purchase
This is just a torrent of words, as if FSF's granny gave him a huge box of words which he tipped out into a big heap, or as if he got a publishing deal which paid by the word; for example:
"Then, rather gradually, she realized without turning about that she was not alone in the room. In an inhabited room there are refracting objects only half noticed: varnished wood, more or less polished brass, silver and ivory, and beyond these a thousand conveyers of light and shadow so mild that one scarcely thinks of them as that, the tops of picture- frames, the edges of pencils or ash-trays, of crystal or china ornaments; the totality of this refraction — appealing to equally subtle reflexes of the vision as well as to those associational fragments in the subconscious that we seem to hang on to, as a glass-fitter keeps the irregularly shaped pieces that may do some time — this fact might account for what Rosemary afterward mystically described as “realizing” that there was some one in the room, before she could determine it. But when she did realize it she turned swift in a sort of ballet step and saw that...." - what on earth is all that about? - why not: "Sensing that she was not alone in the room, she turned and saw that...."?
In terms of swimming, which is close to what this novel starts with, some novels race towards the finish, like a swimmer doing a fast front crawl; some novels move more gradually to the finish, like a swimmer doing a steady breaststroke; this novel is like someone treading water for a while, then doing one or two half hearted strokes of doggy paddle, then treading water for a while, then....
Sadly, at 43% of the way through, I cannot be bothered with it any more and have ended up with a rare DNF.
Read more
21 people found this helpful
Report abuse

M. Dowden
5.0 out of 5 stars A Complex Read
Reviewed in the United Kingdom on 21 July 2016
Verified Purchase
I must admit that it has been a few years since I last read any of F Scott Fitzgerald’s works, so it made a pleasant change to re-read this book. This particular novel was the last complete one that was published by Fitzgerald in his lifetime. In some ways this book is semi-autobiographical, that is if you look at what was happening in the Fitzgerald’s lives at around the time that this was first thought of and writing started.

To most people The Great Gatsby is considered to be Fitzgerald’s masterpiece; however he himself considered this book to be, although it was met with some very mixed reactions by the reading public at the time. It has to be admitted though that as the yeas have gone by this book has met with a greater appreciation and enjoyment by later generations.

Set in the Twenties we first meet Dick and Nicole Diver in a small relatively out of the place resort on the Riviera, a few miles from Cannes. As new film star Rosemary Hoyt and her mother come to the nearest hotel for a break so Rosemary comes across the Divers, and takes an instant liking to Dick. As we follow this episode we see that she starts to become aware of something perhaps a little strange in the Diver marriage.

Quite complex in its structure, and taking in how Dick and Nicole came together this has a lot to offer readers. If you take away the Jazz Age and the wealth of the characters here, then the issues raised are still as relevant today as when this was first written. We have mental illness, child sex abuse, extra-marital relationships, keeping up appearances and people behaving badly abroad, all of which still goes on, and other subjects raised.

With some really well fleshed out characters we also see how Dick Diver, who should be the most stable character here slowly becomes worn down, more introspective and turning to alcohol. The two leading ladies in this book, Nicole and Rosemary become much stronger and self confident as the story goes on, becoming more the type of modern woman that we are familiar with today. An ideal book to read any time, this also gives you more than enough to contemplate and discuss within a book group setting.
Read more
12 people found this helpful
Report abuse

MJH
1.0 out of 5 stars Defective Content - beware
Reviewed in the United Kingdom on 28 January 2019
Verified Purchase
There are three reasons why you should not be offering this edition to your Kindle customers or making a charge. First this ebook is a Project Gutenberg edition for which there should be no charge. Second the text is defective - which you can verify by comparing it to the original. Third, Kindle customers can access a free copy of the same novel by buying the Complete Works. You should remove this offer from the Kindle store.
Read more
9 people found this helpful
Report abuse

Martin Ternouth
5.0 out of 5 stars Greater than Gatsby
Reviewed in the United Kingdom on 2 January 2014
Verified Purchase
I first read The Great Gatsby fifty years ago, and have re-read it regularly over the years to indulge myself in the richness of the prose and the clear morality of the story. I had several times attempted to get into Tender is the Night, but until earlier this month it had always eluded my attention. Gatsby has a clear narrative timeline and two fine characters - the self-effacing Nick, and Gatsby himself - and two detestable pantomime villains: Daisy and her husband, who damage people but then pass on cocooned in their wealth.

Tender is the Night has a quite different structure - and there are no villains at all. I tackled the book again a week or so back at the urging of a friend and published author whose views I much respect, and who rated the book greater than Gatsby. I read it once, and at the end of this first reading quite frankly didn't see the point: medical charlatan marries young, beautiful, rich patient and gets his comeuppance. But, respecting my friend's views, I persevered: and half-way through the second time I began to get an understanding. Now, having read it in full three times in succession I can see why it can be considered to be greater than Gatsby.

The triptych structure is essential to the book. The first part shows Dick and Nicole Diver at the height of their existence: glamour and attractiveness seen through the perceptive eyes of a young (seventeen) but self-assured young actress, Rosemary, who falls heavily in love or infatuation with Doctor Dick. He rises nobly to resist her attempt at an affair without offending her, and clearly expressing his responsibilities to the wife and children he loves.

The second section is a flashback explaining how their relationship came to be, and the perilous quicksands upon which it is built. Dick is a serious young psychiatrist with a dazzling future ahead of him - but he is poor. Nicole, then sixteen, becomes his patient and over time they fall in love and marry: she is emotionally damaged, but very rich. Taking this history in the second part gives you cause to reflect upon the dazzling impressions of the first part, and to suspect the weaknesses that underlie it.

In part three, the finale, the edifice of their life together crumbles and eventually their marriage falls apart. They separate, divorce; with Nicole now strengthened to independence and Dick descending into alcohoiism and a succession of appointments in small towns where his charm can disguise the failure of his talent. Nicole still loves him for what he meant to her, and you know that he still loves her - but that there is no way back. Both Dick and Nicole terminate their relationship with a dignity that confirms that their relationship, although flawed, was nevertheless something of value.

I now, and somewhat to my surprise, agree with my friend's assessment that it is greater than Gatsby - but it requires more effort than a casual flipping through.
Read more
13 people found this helpful
Report abuse

Alex
5.0 out of 5 stars Clean edition of a classic book
Reviewed in the United Kingdom on 17 January 2013
Verified Purchase
This edition is F. Scott Fitzgerald's 1934 original novel. There is a cheaper edition, but I noticed reviews saying it had spelling and punctuation mistakes, and even missing text. So I was glad I bought this edition which is free from errors and well laid out. There are contemporary photographs between chapters which are unique to this version as well.

If you haven't read Tender is the Night before, it's a longer and more challenging work than The Great Gatsby, more ambitious and more rewarding in my mind. You can see the influence of Sigmund Freud and notions of madness. I would recommend you Google 'Hemingway's Letter to F Scott Fitzgerald' to see what another great writer thought about this classic book.
Read more
12 people found this helpful
Report abuse
See all reviews
Back to top
Get to Know Us
Make Money with Us
Let Us Help You
And don't forget:
© 1996-2021, Amazon.com, Inc. or its affiliates