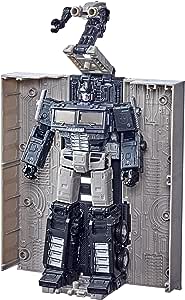 The legendary Autobot leader faces every challenge with wisdom and bravery. Including his own death.

This pack comes with a grayscale Optimus Prime figure, inspired by his appearance as he drains of color and dies in the 1986 film Transformers: The Movie. The Matrix of Leadership, in full color, fits inside his chest so fans can imagine Optimus Prime removing the still vibrant Matrix of Leadership from his chest and passing it on to Ultra Magnus.

The figure converts between robot and truck modes in 35 steps. Imagine laying Optimus Prime to rest in the converted truck trailer. The figure also comes with an Ion Blaster, but in this state, it's likely he won't need it.

Transformers and all related characters are trademarks of Hasbro.

4.8 out of 5 stars
4.8 out of 5
876 global ratings
How are ratings calculated?
To calculate the overall star rating and percentage breakdown by star, we don’t use a simple average. Instead, our system considers things like how recent a review is and if the reviewer bought the item on Amazon. It also analyses reviews to verify trustworthiness.

Mallrat
5.0 out of 5 stars well packed
Reviewed in Australia on 17 August 2020
Verified Purchase
Nice to experience a seller treating a collectible with some care and respect in regards to packing and to get the item delivered in a decent state. Cheers guys!
Read more
Helpful
Comment Report abuse

Thanh
4.0 out of 5 stars Need this for your collection
Reviewed in Australia on 14 September 2020
Verified Purchase
Nice transformer. Like a smaller and plastic version of mp10. Disappointed that the box was damaged.
Read more

T
5.0 out of 5 stars Till all are one.
Reviewed in Australia on 24 September 2020
Verified Purchase
This figure depicts Optimus Prime's death in the animated movie with a nice colour scheme of greys. A fun figure itself with good articulation and truck mode.
Read more
Helpful
Comment Report abuse

Captain K7
5.0 out of 5 stars Worth it if your Transformers fans
Reviewed in Australia on 23 August 2020
Verified Purchase
Only needs one explanation AMAZING!
Read more
Helpful
Comment Report abuse
See all reviews

Andrew Alvarez
5.0 out of 5 stars Great figure! Poorly Packed
Reviewed in the United States on 18 July 2020
Verified Purchase
This figure is great, although a bit morbid in nature. It shows Optimus Prime as he appeared as a corpse in Transformers: The Movie (1986). Commemorating the moment a million children were traumatized by the loss of their favorite Autobot, this figure has a newly sculpted battle damaged head and some paint on the left side of his abdomen indicating where Megatron slashed him open with a laser sword.

Corpse Prime comes unceremoniously tied down in a plain brown box. The top of the box contains some inked artwork of Prime's chest with the image of some of his mourning comrades reflected in the windshield. Unfortunately, my box was thrown into a larger box without any packing material so it was damaged and torn in two places. I open my Transformers so it's not a terrible deal. Just annoying. Thankfully, the corpse was not damaged in shipment.

Incidently, this makes a nice zombie Prime too.

Some kind of Pandaful
5.0 out of 5 stars Till all are one.
Reviewed in the United States on 19 July 2020
Verified Purchase
Optimus Prime was originally known as Orion Pax, a police captain from Rodion. An encounter with a pre-Decepticon Megatron would change the course of his life, teaching him that freedom was not just the right of all "civilised" beings, but of all sentient beings, and causing him to publicly reclaim the name "Autobot", previously used only at Cybertronians as a derogatory term, before the corrupt Senate.

After the rise of the Decepticons and the death of the merciless Zeta Prime, he became the Prime, and entered what would become a millions-of-years-long war of attrition with the Decepticons, which would lead to the death of Cybertron and the spreading of the Cybertronian civil war far beyond their homeworld in a push for resources. With the end of the war and the emptying of the Matrix of Leadership to restart Vector Sigma and rebirth Cybertron, he found himself rejected by the returning civilian population, and - secretly gladly - abdicated his rank and returned to his original name of Orion Pax as he travelled through the galaxy.
Roughly two years later, however, events would force him back into the Autobots. After killing Nova Prime he proudly retook the mantle of Prime, convinced by Rodimus that he had redeemed it, and seemingly destroyed Shockwave to save all of time and space. In the aftermath, Optimus reassumed his role as leader of the Autobots and led his forces back to Earth in search of Alpha Trion and the Enigma of Combination; before long, however, Prime found himself at a crossroads after his role in the formaiton of Cybertron's Council of Worlds, finding that the religious Transformers who hailed from Cybertron's long-lost colonies perceived all 'bots who held the rank of "Prime" as a living god. Prime initially came to lean on—and, in time, exploit—the faith of others as he grappled with the task of defending Earth from Galvatron's neo-Decepticon splinter faction, and eventually took drastic measures by unilaterally annexing Earth into the Cybertronian Council of Worlds for its own protection.

In time, however, Prime would come to realize that his new tactics threatened to restart the cycle of imperialism and violence that his progenitors had committed and adopt a gentler approach, working with humanity and Cybertronians alike to guide Earth towards a better future. Despite having learned from the sins of his ancestors, Prime found himself confronted by the ultimate example of their hubris: the threat of Unicron, a wepaon created by "Onyx Prime—" in reality, a time-travelling Shockwave, who had deliberately engineered the rise and fall of the entire Prime lineage. Despite Prime's best efforts, Cybertron was destroyed, and Orion—shedding the title of "Prime" in his final moments—sacrificed his life to end what Shockwave had begun all those years ago, allowing both humans and Cybertronians to begin anew on Earth.

Bad Dog Daddy
2.0 out of 5 stars Decades of waiting and they dropped the ball
Reviewed in the United States on 25 July 2020
Verified Purchase
Let me start off by saying this is just a junk figure. The head sculpt is ok but the figure is pure garbage. After SS38 I expected so much more. It's the same as the earthrise prime which suffers from the same flimsy plastic, poor design, tiny trailer, no rover, ports all over him in just bad spots. Do yourself a favor buy a SS38 and a can of grey spray primer and you will be so much happier. The trailer is junk. It's small, flimsy, and full of ports with nothing to go in it. This is not a dead prime, just a money grab for a repaint of a bad figure to start with. Not every figure is perfect but you can tell when they made the earthrise prime they knew it wouldn't sell past preorders so they molded a damaged head and created this disaster. How about just putting out a great g1 prime trailer. I'd buy that for 50.
Read more
6 people found this helpful
Report abuse

BillyD
5.0 out of 5 stars No matter the cost
Reviewed in the United States on 25 July 2020
Verified Purchase
I just got back from a trip and had this guy waiting on me when I got back. If you want a real review you should go look at the regular Earthrise Optimus Prime. This figure is almost exactly the same, aside from the obvious paint job.

He's made to look just like the death scene in the 1980's "Transformers: The Movie".

They did a great job, especially with the cracks on his face and the mangled "ears" or crests on his head.

Otherwise, it's mostly a repaint of one of the best looking Primes ever made. The trailer is still a little small and a lot cheap looking, but robot mode is fantastic and the trailer works well for a bed to lay him in like his final moments.

If you are an Earthrise collector, or especially Transformers in general, this is a great figure to add to your collection!

William Hammond
5.0 out of 5 stars 'til all are one.
Reviewed in the United States on 19 July 2020
Verified Purchase
the overall presentation is incredible. this figure represents the iconic scene; optimus prime's death, in the animated movie from the 80's. same mold as the original earthrise version. also has same accessories (ion blaster & trailer) done in matching colors. the head sculpt is new. its made to look like prime's battle damaged helmet in the scene. they even included the cracks in his faceplate, nice touch. spot on screen accuracy. the color scheme really works well. my only complaint is the plastic they used for this figure feels lightweight and cheaper, as compared to the original version. but the overall quality is still great. fantastic figure, love it. i highly recommend this figure for all collectors, especially those that grew up watching the original series and animated movie. go for it!
Read more

2 people found this helpful
Report abuse
See all reviews
Get FREE delivery with Amazon Prime
Prime members enjoy FREE Delivery and exclusive access to movies, TV shows, music, Kindle e-books, Twitch Prime, and more.
> Get Started
Back to top
Get to Know Us
Make Money with Us
Let Us Help You
And don't forget:
© 1996-2020, Amazon.com, Inc. or its affiliates