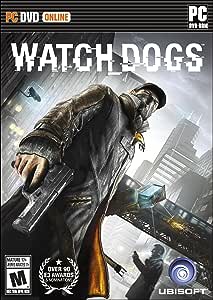 All it takes is the swipe of a finger. We connect with friends. We buy the latest gadgets and gear. We find out what's happening in the world. But with that same simple swipe, we cast an increasingly expansive shadow. With each connection, we leave a digital trail that tracks our every move and milestone, our every like and dislike. And it's not just people. Today, all major cities are networked. Urban infrastructures are monitored and controlled by complex operating systems.

BouBou
5.0 out of 5 stars A stressful kind of gameplay, but I love it!
Reviewed in Canada on 17 January 2015
Platform: PCEdition: StandardVerified Purchase
The installation with the DVD wasn't of much use it seems, as it downloaded everything again using uplay. That is not the seller's fault though, but an editor's flaw. Just took a little while longer than I had expected to install, but I had all I needed (the key) and a physical copy of the game, which I like to keep as collection.

Also, I thought I would get more DLCs from it... there were none for PC (for more infos, see:
http://heavy.com/games/2014/05/watch-dogs-release-date-consoles-wii-u-pc-collectors-edition-ubisoft/

As for the game, I own the PC version and contrary to other comments, I found driving quite easy (similar to easier to playing strictly racing games). Just add control with the arrows if you are a right-hand person (I personnally was alternating between arrows and WASD when I needed to use the mouse for camera at the same time, which you don't during races). I agree with the lack of ability to save everywhere and then load to that same spot, but as you can save at an ATM which can be found at every corner of almost any street, it is not so annoying. And if you find it too difficult, change your play style, use stealth kills, focus pills, go buy the best weapons! Money is almost too easy to get in this game.

I enjoyed playing every side quest (got the platinum achievement on difficult), and I really liked the idea of multiplayer woven within a single player campaign. It was one of my first attempts with multiplayer, and even if it caused me some insomnia at night, this was a great experience and fun to try beating other players at different games. And if you are bad at it, you can get better by learning from other players... And when you want a pause from invasions (and play the sidegames relaxed) but doesn't want to reset your online reputation, you can just start Uplay offline!

There are a few things that could be improved (like the respawn locations in the multiplayer game "Decryption"), but overall, I hope to see other games of this kind in the near future.

Amazon Customer
5.0 out of 5 stars Good value.
Reviewed in Canada on 23 October 2016
Platform: PCEdition: StandardVerified Purchase
I really enjoyed the game. Gameplay is good though you may want to use a controller for driving. The story is OK but not epic. Probably not the best game ever but still worth playing, being a hacker is really cool.
Read more
Helpful
Sending feedback...
Thank you for your feedback.
Sorry, we failed to record your vote. Please try again
Report abuse

Cory
5.0 out of 5 stars Great game, great price!
Reviewed in Canada on 5 January 2017
Platform: PCEdition: StandardVerified Purchase
I'm loving this game, and I only spent like $8 on it or something crazy like that. Whether on Steam, Uplay, console or Amazon, play this game through! It's worth what they charge for it these days, easily.
Read more
Helpful
Sending feedback...
Thank you for your feedback.
Sorry, we failed to record your vote. Please try again
Report abuse

Joe
4.0 out of 5 stars which sounds pretty good.
Reviewed in Canada on 30 December 2014
Platform: PCEdition: StandardVerified Purchase
Delivered quickly, and undamaged. It was a gift, so I can't talk to much about that aspect of things. My son compares it to a cross between Rockstar Games' L.A. Noir and the Person of Interest TV show, which sounds pretty good.
Read more
Helpful
Sending feedback...
Thank you for your feedback.
Sorry, we failed to record your vote. Please try again
Report abuse

Swank
5.0 out of 5 stars Five Stars
Reviewed in Canada on 1 May 2017
Platform: PCEdition: StandardVerified Purchase
Fantastic game, and great to have a hard copy. Shipped and priced great, I'm OHG (One Happy Gamer).
Read more
Helpful
Sending feedback...
Thank you for your feedback.
Sorry, we failed to record your vote. Please try again
Report abuse

dmx
3.0 out of 5 stars Good, but lacking come-back power
Reviewed in Canada on 25 March 2015
Platform: PCEdition: StandardVerified Purchase
Very good game playing, but somehow lacks something to make me stick with it. Maybe it's a bit repetitive.
Read more
Helpful
Sending feedback...
Thank you for your feedback.
Sorry, we failed to record your vote. Please try again
Report abuse
Load more international reviews