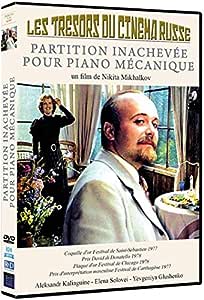 Al Stubbino
5.0 out of 5 stars Russia at it's best.
Reviewed in the United Kingdom on 28 May 2010
Verified Purchase
Without a doubt this is one of the finest films to come from Russia for many a long year.
The direction, design, photography, the performances and the writing are all superb.
And wonderfully sensitive to Checkov's humour and his Russian soul.
Anyone serious about film should have this in their collection.
It's a belter!