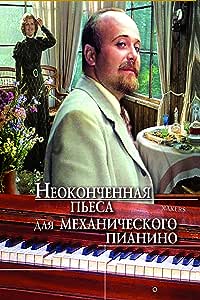 An Unfinished Piece for the Player Piano (Russian) [DVD]

United Kingdom released, PAL/Region 0 DVD: LANGUAGES: Russian ( Dolby Digital 5.1 ), Arabic ( Subtitles ), Chinese ( Subtitles ), Dutch ( Subtitles ), English ( Subtitles ), French ( Subtitles ), German ( Subtitles ), Hebrew ( Subtitles ), Italian ( Subtitles ), Japanese ( Subtitles ), Portuguese ( Subtitles ), Russian ( Subtitles ), Spanish ( Subtitles ), Swedish ( Subtitles ), WIDESCREEN (1.85:1), SPECIAL FEATURES: Biographies, Cast/Crew Interview(s), Featurette, Filmographies, Interactive Menu, Photo Gallery, Scene Access, SYNOPSIS: A dacha is a summer home for Russians, away from the hurly-burly of the city, and can be as primitive as a cabin or as elaborate as a palace. A much-favored place for gatherings of intellectuals, dachas are a favored literary setting. In this film, adapted by Nikita Mikhailkov from Anton Chekhov's first play and some of his other works, the schoolteacher Platonov (Alexander Kalyagin) has come with his wife to spend a summer weekend at a friend's dacha. Among the other guests there, he meets his former lady-love Sophia (Elena Solovei), who is now married to another. Even though he thought he had recovered from his disappointed affection for her, he finds that this is not so for at least two reasons. First, she only recently got married; secondly, she is married to an idiot. Nostalgia spurs them to investigate their affection for one another, but eventually, as they remember their stations in life, their old love does not seem so important. In the middle of the night, Platonov is overtaken by grief over his lost youth and lost loves, and he awakens the entire household with his cries. Everyone returns to bed soon after, and by the morning all is forgiven, or forgotten, as the guests prepare to return to their li...Unfinished Piece for a Mechanical Piano (1977) ( Neokonchennaya pyesa dlya mekhanicheskogo pianino ) ( Unfinished Piece for the Player Piano )

5.0 out of 5 stars
5 out of 5
10 global ratings
How are ratings calculated?
To calculate the overall star rating and percentage breakdown by star, we don’t use a simple average. Instead, our system considers things like how recent a review is and if the reviewer bought the item on Amazon. It also analyses reviews to verify trustworthiness.

Frederick R. Andresen
5.0 out of 5 stars A great revival of a Chekhov original.
Reviewed in the United States on 2 December 2007
Verified Purchase
When I lived in Moscow, I was fortunate to see a revival of "Platonov," Chekhov's first play written at age 19. When it was rejected, he tore it up. But a copy was found in the 1920's and revived. Then on Moscow TV I watched Nikita Mikhalkov's great adaptation of it. It is so typical of Chekhov's images of the despondent and pointless life of Russian gentry in the late 19th century. It is full of contrasts at that time; fascinating, intellectual, and boring. The Russians in this pivotal time in Russian history seemed to find much in common and Chekhov is very much in style today. I have many favorite scenes.
By Frederick R. Andresen, author of "Walking on Ice, An American Businessman in Russia."
Read more
3 people found this helpful
Report abuse

Andrew Leeson
5.0 out of 5 stars Chekhovian Bliss.
Reviewed in the United States on 21 July 2014
Verified Purchase
A must for every Chekhov fan, this project captures the essential 'feel' of his characters and of the Russian upper middle class world he portrayed to us, without stealing, as far as I am aware, any of his dialogue or situation. A genuine, authentic masterpiece.
Read more
2 people found this helpful
Report abuse

Badger
5.0 out of 5 stars Superb Performance of Chekhov
Reviewed in the United States on 2 April 2013
Verified Purchase
A comedy in the broadest sense, looking squarely at human foibles. Most productions of Chekhov come off as tragedies rather than comedies. This production hits just the right balance, despite some obvious film-school touches. The only other example I know is Louis Malle's "Vanya on 42nd Street" (in English).
Read more
2 people found this helpful
Report abuse
See all reviews
Get FREE delivery with Amazon Prime
Prime members enjoy FREE Delivery and exclusive access to movies, TV shows, music, Kindle e-books, Twitch Prime, and more.
> Get Started
Back to top
Get to Know Us
Make Money with Us
Let Us Help You
And don't forget:
© 1996-2020, Amazon.com, Inc. or its affiliates