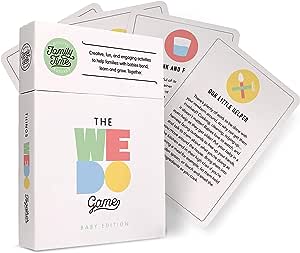 Brand: The WEDO Game
5.0 out of 5 stars 6 ratings
Secure transaction
Returns Policy
Amazon-managed Delivery
Your transaction is secure
We work hard to protect your security and privacy. Our payment security system encrypts your information during transmission. We don’t share your credit card details with third-party sellers, and we don’t sell your information to others. Learn more
Amazon-managed Delivery
Amazon manages delivery by using preferred couriers/agents. Order delivery tracking to your doorstep is available

The game initially began with Dave’s and his family writing down a screen free activity that they’d like to do, with the suggestions being put in a hat and drawn at random. When the family told friends about what they were doing, they were met with positive responses and many decided to do the same thing with their own families. They refined the activities, designed the packaging and launched The WeDo Game in September 2016. Over 3,500 copies of The WeDo Game have been sold worldwide to date and it is now stocked in Australia, New Zealand and the United States, to help families rediscover the elements of ‘together time.’

The WeDo Game is super easy to play! There’s no complex rule book and no right or wrong answers. You just simply pick a card at random out of the box and follow the instructions on the card. Each activity lasts from 20 minutes to an hour so it can be played on a weeknight after school or work.

5.0 out of 5 stars
5 out of 5
6 global ratings
How are ratings calculated?
To calculate the overall star rating and percentage breakdown by star, we don’t use a simple average. Instead, our system considers things like how recent a review is and if the reviewer bought the item on Amazon. It also analyses reviews to verify trustworthiness.

Vicky D
5.0 out of 5 stars Best newborn gift!
Reviewed in Australia on 29 October 2019
Verified Purchase
An amazing little box of inspiration, fun and love to help you spend quality time with your newborn baby. Great gift for new mums and dads, that they can take anywhere and use for years. I'm going to buy this for every new parent I know. Design and quality is really good too.
Read more
Helpful
Report abuse

Jess
5.0 out of 5 stars Simple and creative gift every parent will enjoy playing with their baby.
Reviewed in Australia on 6 December 2019
Verified Purchase
I bought this product as a gift for friends having their first bub. They have only just started using it and are already raving about how engaging and age-aproppriate the activities are. I will definitely be buying this again!
Read more
Helpful
Report abuse

Reily.k
5.0 out of 5 stars Very clever and unique
Reviewed in Australia on 20 November 2019
Verified Purchase
Very clever!
I Love the ideas of bonding activities to do with my baby. It also makes a great newborn gift. Beautifully designed. Would highly recommend.

CarmenAlia
5.0 out of 5 stars Great idea for a gift!
Reviewed in Australia on 30 January 2020
Verified Purchase
Item arrived on time for a gift and they were very happy
Read more
Helpful
Report abuse

Sarah
5.0 out of 5 stars Its fun
Reviewed in Australia on 2 January 2021
Verified Purchase
Its fun, but most of this stuff came naturally to me, not that i am a clever clogs I am a single first time mother who worried too much about my baby getting bored.
I like that it will grow with him as his development continues.

I recommend it if you’re shy with babies it has some good ideas. I just did one card a day that I hadn’t tried already so to not over stimulate.

Read more
Helpful
Report abuse
See all reviews
Get FREE delivery with Amazon Prime
Prime members enjoy FREE Delivery and exclusive access to movies, TV shows, music, Kindle e-books, Twitch Prime, and more.
> Get Started
Back to top
Get to Know Us
Make Money with Us
Let Us Help You
And don't forget:
© 1996-2020, Amazon.com, Inc. or its affiliates