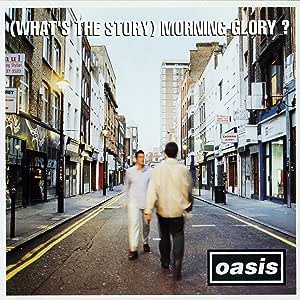 (What's The Story) Morning Glory?, the follow-up to the debut album Definitely Maybe, is Oasis' biggest-selling album with 22 million copies sold worldwide. It was recorded between May and June 1995 in Rockfield Studios, Monmouthshire, with Owen Morris and Noel Gallagher producing. Released on October 2nd 1995 it spent 10 weeks at No.1, is the 5th biggest-selling album in UK chart history and became the band's breakthrough album in the US where it sold 4 million copies. The new edition has been remastered from the original tapes by Ian Cooper at London's Metropolis Studios, supervised by the album's producer Owen Morris. A small army of contributors including original members of the inner circle who were involved in studio and live recordings came together to hunt down unheard demos and live material. The team also unearthed a wealth of never-seen-before photos and vintage memorabilia which will be included in the new artwork.

Highlights of the bonus content include:
* Previously unheard demos of She's Electric and Rockin Chair recorded at Mark Coyle's Manchester studio. Demos of Some Might Say, Hey Now, and Boneheads Bank Holiday recorded by Mark Coyle for the first time at the band's soundcheck at Club Quattro in Tokyo in September 1994
* Live recordings from legendary gigs such as Knebworth House, Maine Road Stadium, Earls Court, and Bath Pavilion
* All of the Morning Glory singles acclaimed B-sides including Talk Tonight, Acquiesce, The Masterplan, and Underneath The Sky

4.7 out of 5 stars
4.7 out of 5
2,253 global ratings
How are ratings calculated?
To calculate the overall star rating and percentage breakdown by star, we don’t use a simple average. Instead, our system considers things like how recent a review is and if the reviewer bought the item on Amazon. It also analyses reviews to verify trustworthiness.

Brian Bathie
5.0 out of 5 stars A really good vinyl issue.
Reviewed in the United Kingdom on 21 November 2017
Verified Purchase
I purchased this vinyl album over 3 years ago and have now actually got round to playing it for the first time. I think I must have mis filed it as I have a large collection.I have read many previous reviews of this album which report jumping, skipping ,noise, distortion and poor remastering. I am normally one of the first to complain about such issues but I have to say my copy is perfect. The pressing is really good with next to no surface noise.I play vinyl on a very high end system which is ruthlessly revealing and if there were any faults they would certainly be evident. As for the music absolutely brilliant. Virtually every track is a gem. No need to talk about specific songs as it’s all been said before.
Read more
13 people found this helpful
Report abuse

Antonio Robert
4.0 out of 5 stars Oasis’ commercial peak
Reviewed in the United Kingdom on 22 April 2020
Verified Purchase
Sometimes the self-proclaimed, big-mouthed upgraders of The Beatles, Oasis (Gallagher brothers and their gang) nevertheless positioned themselves as deserved forerunners of the British pop-rock since the mid 90’s.
With “What’s The Story Morning Glory”, they hardly improved from the already excellent “Definitely Maybe” album - but its mainstream reception was overwhelming and Oasis turned first-rank superstars. “Wonderwall” became a virtual anthem of a generation, and some tracks even trumped that one with their sheer ecstatic hooks - “Roll with It” and especially “Some Might Say”. “Champagne Supernova” and “Don’t Look Back in Anger” also earned their place in Oasis books. The rest of the album is not that memorable - but still carries the Gallagher poise and self-confidence. Often cited as one of the 90’s best, the subsequent work of Oasis - and of both Noel and Liam separately - hit even higher heights. But this commercial peak will never be reached again.

Jason King
1.0 out of 5 stars They’ve butchered a classic!
Reviewed in the United Kingdom on 11 August 2020
Verified Purchase
Avoid! When originally released, two versions were rejected by Alan McGee. They finally got it right and the rest is history.

So why on earth they’ve got someone else to attempt to remaster it is a mystery. I’ve got the original and bought this for backup but sending back. So many sounds missing, and many others appearing which just make it sound shocking compared to the original.

If the original was the mosh pit version, this is the Instagram one...

60 people found this helpful
Report abuse
Translate review to English
See all reviews
Get FREE delivery with Amazon Prime
Prime members enjoy FREE Delivery and exclusive access to movies, TV shows, music, Kindle e-books, Twitch Prime, and more.
> Get Started
Back to top
Get to Know Us
Make Money with Us
Let Us Help You
And don't forget:
© 1996-2020, Amazon.com, Inc. or its affiliates