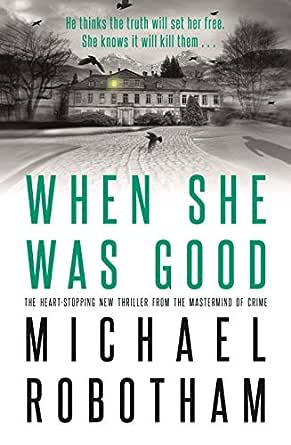 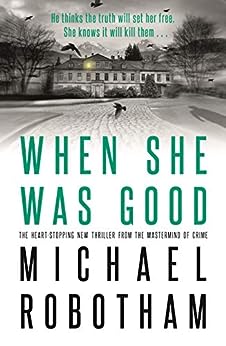 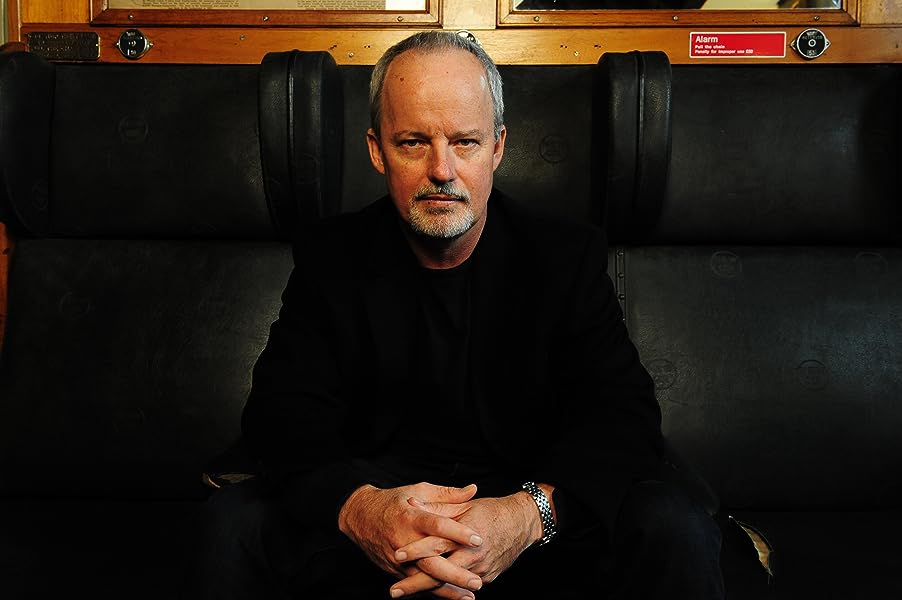 When She Was Good: The heart-stopping new thriller from the mastermind of crime (Cyrus Haven) Kindle Edition

"[A] gripping follow-up to Good Girl, Bad Girl... Robotham delves into some very (very) dark territory, and the horror steadily mounts... Readers will be putty in this supremely talented author's capable hands. An urgent, poignant, and terrifying thriller. More please." --Kirkus Reviews, STARRED review "[A] powerhouse of a novel... The whole enterprise is enriched by wonderfully cadenced prose that almost invites one to feel its texture. It's rare to be overawed by the writing in scenes of violence and danger, but...this one's a jewel, and readers who don't know Robotham should immediately catch up." --Booklist, STARRED review "Twisty....fans of grim psychological suspense will be rewarded." --Publishers Weekly --This text refers to an alternate kindle_edition edition.

Before becoming a novelist, Michael Robotham was an investigative journalist working across America, Australia and Britain. As a journalist and writer he has investigated notorious cases such as the serial killer couple Fred and Rosemary West. He has worked with clinical and forensic psychologists as they helped police investigate complex, psychologically driven crimes.

Michael's 2004 debut thriller, The Suspect, sold more than 1 million copies around the world. It is the first of eight novels featuring clinical psychologist Joe O'Loughlin, who faces his own increasing battle with a potentially debilitating disease. Michael has also written four standalone thrillers. In 2015 he won the UK's prestigious Crime Writers' Association Gold Dagger Award with his standalone thriller Life or Death.
He lives in Sydney.

A page-turner that will want you to ignore everything else going on around you until you get the answers. Another excellent Robotham suspense and a cracking good new series. - Herald SunAn urgent, poignant, and terrifying thriller ... Readers will be putty in this supremely talented author's capable hands. - Kirkus ReviewsA gripping read that holds attention all the way to the bloody conclusion and the final twist. - Canberra WeeklyVery, very good - Weekend AustralianI always have a huge stack of books to read, but a Michael Robotham novel automatically goes to the top of the pile - Stephen KingHaunting . . . Robotham expertly raises the tension as the action hurtles toward the devastating climax. Readers will hope the complex Cyrus will return for an encore - Publishers Weekly on Good Girl, Bad GirlExplosive . . . This sensitive, suspenseful mystery firmly establishes Robotham in the top ranks of psychological-thriller writers - Booklist on Good Girl, Bad Girl --This text refers to an alternate kindle_edition edition.
Read more

4.5 out of 5 stars
4.5 out of 5
879 global ratings
How are ratings calculated?
To calculate the overall star rating and percentage breakdown by star, we don’t use a simple average. Instead, our system considers things like how recent a review is and if the reviewer bought the item on Amazon. It also analyses reviews to verify trustworthiness.

gary hampson
5.0 out of 5 stars Best yet by Robotham
Reviewed in Australia on 9 August 2020
Verified Purchase
Cyrus Haven and Evie continue to flush out the ghosts of her past in a non-stop thriller. I just love the way the author uses a sparse prose style to give me all the information I require to become engrossed in the story and the characters, but not one word more. The logic of the story and the pace are perfectly controlled. Cyrus and Evie are just outside the law at all times and that makes them real. Who else can you trust other than yourselves.

I look forward to each one of Robotham’s new books and I don’t understand why he is not already up there with more recognized crime writers. Perhaps a TV series might help.

Woeful
4.0 out of 5 stars This Micheal Robotham Book has Cyrus Haven as the main character rather than Joe O'Loughln
Reviewed in Australia on 3 September 2020
Verified Purchase
I have read all of Michael Robotham books. However, I find the latest a bit disappointing. Perhaps it's because Cyrus has not been fleshed out as a character whereas Joe has, with all his problems concerning his illness and faults with regard his marriage. Cyrus is still a bit of a blank paper whom I can't get attached to.
'When she was good", tells the backstory of Evie, even so I could not feel desperately sorry for her. She had such a tragic childhood, it is no wonder she went off the rails. Even so I don't think the book actually merges her life tragedy with Cyrus. The end seems to tell you the final in a very compressed space of time.

Rebecca Hourigan
5.0 out of 5 stars Best page turning sequel ever!!
Reviewed in Australia on 1 September 2020
Verified Purchase
Book 1 - Good girl bad girl was the beginning of the page turning events, during COVID-19 (Australian lock down) this was my life then to realise it was a sequel - My dreams came true!!
I couldn't wait to start the next book (WHEN SHE WAS GOOD) I was quick to ring my local book shops to embarrass myself to find out it wasn't out yet so i was rather quick to pre-order it through amazon.
The characters and the story is so addictive!!
Michael Robotham is an incredible writer, i have read 6 of his books.
"Say your sorry" 10/10
"Shatter" 10/10
"Good girl bad girl & when she was good" 10/10

Janyth Drake
5.0 out of 5 stars An almost fitting end
Reviewed in Australia on 24 August 2020
Verified Purchase
Great follow on to Good Girl Bad Girl and a satisfying ending - well, almost. This author knows how to construct a story to draw you in, hold you there and leave you almost satisfied but wanting more. Keep up the high standard Michael.
Read more
Helpful
Comment Report abuse

L.W
5.0 out of 5 stars Wow
Reviewed in Australia on 2 August 2020
Verified Purchase
Michael Robotham is one of my favorite authors. I have bought all his books.The Cyrus Haven 2 was as great as all the others. I didn't want the book to finish.
Thank you for a great read.
Read more
Helpful
Comment Report abuse

lee finnane
5.0 out of 5 stars Can't beat a novel by Michael Robotham.
Reviewed in Australia on 6 September 2020
Verified Purchase
I find all Robotham's books exciting, easy reading. Humour and interesting general knowledge emerge from tragic situations.
I need to ' slip into' someone else's world to escape my own busy Mind at bedtime.😊
Read more
Helpful
Comment Report abuse

Kindle Customer
2.0 out of 5 stars Ok, but no more than that.
Reviewed in Australia on 29 August 2020
Verified Purchase
Disappointing really. The baddies are no more than vague shapes with zero character development. They are swiftly dispatched at the end with little fanfare and seemingly only in an effort to tie up the loose ends of the plot. The whole thing lacks depth and the details that would have made this an interesting and immersive read are lacking.
Underwhelming follow-up to a good first book of the series.
Read more
Helpful
Comment Report abuse

Lesley Porter
5.0 out of 5 stars Michael Robotham has done it again.
Reviewed in Australia on 28 August 2020
Verified Purchase
I loved it. Cyrus & Evie are going to make a great team. I certainly hope these characters are going to have a long partnership. I so look forward to his books when they come out.
Read more
Helpful
Comment Report abuse
See all reviews

M. E. Urban
5.0 out of 5 stars A FANTASTIC BOOK!
Reviewed in the United Kingdom on 19 August 2020
Verified Purchase
I have all of Michael Robotham's books and have enjoyed each and every one. The Joe O'Loughlin series is great and The Secrets She Keeps was recently made into a telly miniseries, which was very good. I read "Good Girl, Bad Girl" and fell in love with Cyrus Haven and Evie Comer. I eagerly awaited the second in the series and "When She Was Good" exceeded my expectations. I had longed to know all the truth surrounding Evie and this book delivered. It is so hard not to give too much of the plots of these two books away, but it does present a view of a broken girl who survives horrendous treatment and the forensic psychologist who tries to put the pieces of her life back together and find justice for those who caused such horrific trauma. It is beautfully written, heart-breaking and utterly compelling. Please, please Mr Robotham, carry us forward on Evie and Cyrus's journey. I can't bear to part with them.
Read more
One person found this helpful
Report abuse

HWC
1.0 out of 5 stars Disappointed
Reviewed in the United Kingdom on 17 August 2020
Verified Purchase
Having read every book by this author. I was hugely disappointed to read the above. It was obvious from an early stage what would be the outcome. It just dragged the story on for the whole book.
I’m not sure I would read a third in this series.
Read more
Report abuse

Gill Elliott
5.0 out of 5 stars Wow!
Reviewed in the United Kingdom on 19 August 2020
Verified Purchase
What a fantastic thriller this was, every would be fiction writer should try and aim for this level of story telling. There are no cliches in this book, Cyrus is so believable and I’m hoping that this is not the end of what’s happened to Evie.
Read more
Report abuse

Amazon Customer
5.0 out of 5 stars Oh my goodness!
Reviewed in the United Kingdom on 7 August 2020
Verified Purchase
I'm a huge fan of Robotham and this book has not disappointed! Another totally unputdownable book that has my heart thumping towards the end! 5 stars all the way
Read more
One person found this helpful
Report abuse

Long haul traveller
5.0 out of 5 stars Another great read
Reviewed in the United Kingdom on 24 September 2020
Verified Purchase
Just because its’ not a classic doesn’t mean it’s not a work of art
Nuff said but these reviews want more
Trust me it’s a good read
Read more
Report abuse
See all reviews
Get FREE delivery with Amazon Prime
Prime members enjoy FREE Delivery and exclusive access to movies, TV shows, music, Kindle e-books, Twitch Prime, and more.
> Get Started
Back to top
Get to Know Us
Make Money with Us
Let Us Help You
And don't forget:
© 1996-2020, Amazon.com, Inc. or its affiliates